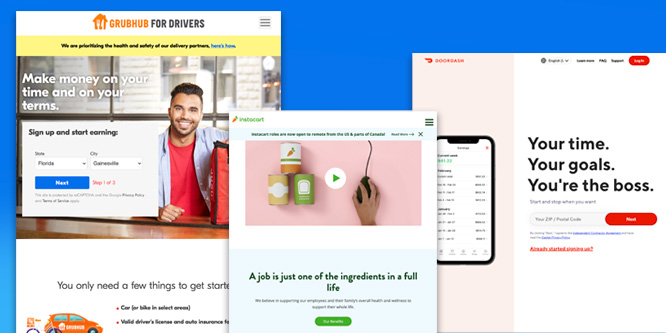 Some of the biggest gig economy employers in the U.S. are facing federal scrutiny for allegedly misleading potential employees about how well their gigs actually pay. The companies may be on the hook for significant fines over the matter.

Uber, Lyft, Instacart, GrubHub, Doordash and Amazon.com (which uses gig workers for delivery) are among more than 1,100 companies that the Federal Trade Commission (FTC) warned about making deceptive statements regarding their wage-earning potential, according to MarketWatch. The agency has seen a proliferation of communications from businesses touting unrealistic potential earnings throughout the pandemic. With many out of work and finding themselves in precarious financial situations, job seekers have been particularly vulnerable to such messaging. Were the companies to be penalized for the practice, it could cost $43,792 per violation. This could add up to fines in the billions of dollars for companies with national ad campaigns.

FTC representatives would not confirm to MarketWatch that any companies were under investigation. The commission has, however, moved against companies over misleading statements to employees before. It fined Uber in 2017 over false claims about earning potential on Craigslist ads and fined Amazon earlier this year over allegations of withholding tips.

While the latest round of accusations takes issue with how major gig employers are getting employees on board, many of the largest companies have already experienced public scrutiny for their treatment of active workers.

A recent study of 500 NYC rideshare drivers, conducted by a worker’s advocacy group, contains the claim that 42 percent of drivers experienced underpayment or non-payment. Workers at both Instacart and DoorDash have recently undertaken labor actions to bring awareness to issues like mistreatment and underpayment.

Even the designation of rideshare drivers as “gig workers” has come under fire, as labor groups have backed legislation in various states to demand such workers be treated as full employees with benefits.

DISCUSSION QUESTIONS: Do you think companies that use gig workers present a deceptive image of earning potential for the jobs they advertise? What type of standards should gig economy employers stick to when trying to drum up interest among potential employees?

Please practice The RetailWire Golden Rule when submitting your comments.
Braintrust
" Not investing in your workforce is what makes an economy fragile."

"It’s one thing to stretch the truth a bit and another to outright lie."

"The odds are definitely stacked against the gig workers. As it stands, there are too many variables that impact what a worker would eventually take home."

6 Comments on "Gig employers may face fines for dishonest recruiting"

Editor’s note: After visiting job recruitment sites when researching this article today, I received a number of retargeted ads on my Instagram feed. Samples: 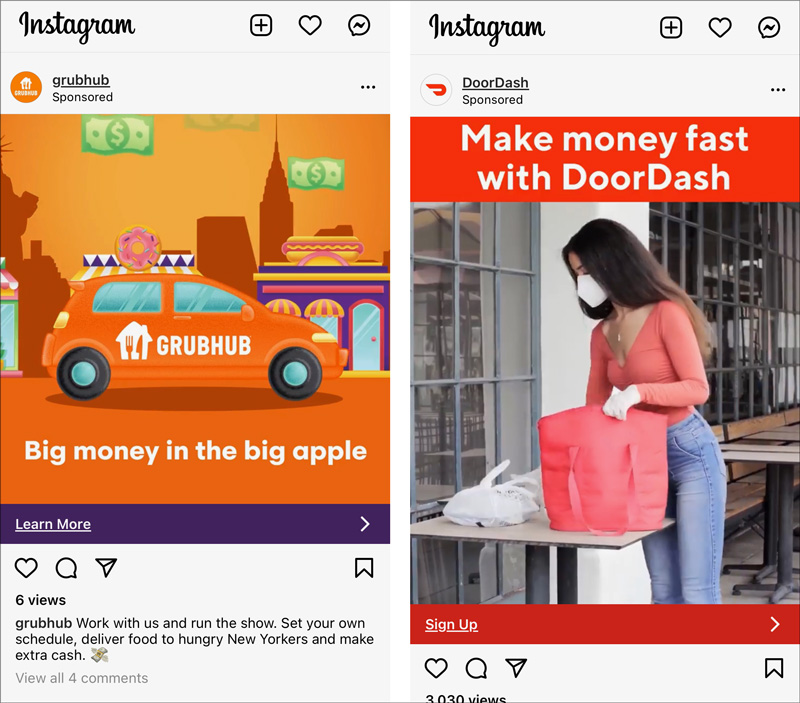 The odds are definitely stacked against the gig workers. As it stands, there are too many variables that impact what a worker would eventually take home. When we add deceptive advertising, withholding of tips, delayed payments, and lack of meaningful recourse for workers, it could be very toxic workplace for people who do this as their primary source of income.

I am not a fan of too much government interference, but the industry evolved so rapidly that meaningful worker protections are not in place yet.

It’s one thing to stretch the truth a bit and another to outright lie. The competition for gig workers, especially in the driver delivery segment, is intense. Yet one would expect market forces to drive higher worker payouts. What we get is higher pay expectations raised by gig employers that fail to materialize in paychecks. It doesn’t appear that the market’s invisible hand has impacted this part of the gig economy yet.

The last several months of extreme labor shortages is proving that workers hold more power than the industry originally thought or acted like. With different retailers announcing each day that they’re raising minimum wage for their employees, gig economy employers are going to be forced to recalibrate what they promise with what they deliver to their workers. The tables are turning here, and I’m happy to see that. Not investing in your workforce is what makes an economy fragile.

The language of deception isn’t hard to recognize, but unless we can all agree to some legal standard — and I don’t see that happening — I expect it to continue.

Having been a gig worker myself, for many years, I’m disheartened at the truth in this story. Gig workers are gig workers for a reason. Let’s start there. All too often the situations that lead to gig work are used to exploit the vulnerability of gig workers. This is not fair. This is not right. Gig work should come with rights and protections just like regular work, but it doesn’t. Having once been given exactly 12 mins to eat during a 12 hr bartending shift and then threatened with termination for saying as much, I understand what it feels like when you know there is no recourse or support for the treatment you receive as a gig worker. It’s denigrating. No worker deserves this. There must be more regulation and less judgement concerning rights and benefits of gig workers. Employers can start by giving fair wages and, at minimum, follow state/local guidelines for breaks and sick days. It’s unfortunate that employers need regulations to treat employees fairly. But, in gig work, time is money and… Read more »
0
|
0
-   Share

Braintrust
" Not investing in your workforce is what makes an economy fragile."

"It’s one thing to stretch the truth a bit and another to outright lie."

"The odds are definitely stacked against the gig workers. As it stands, there are too many variables that impact what a worker would eventually take home."