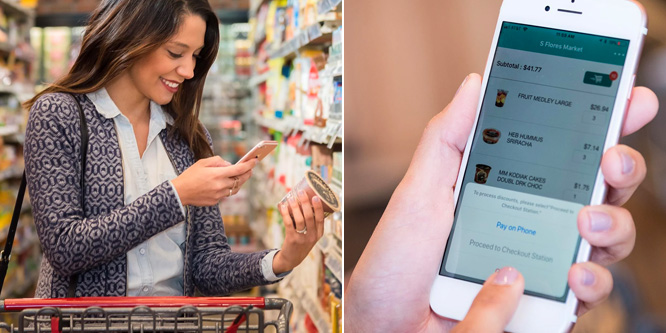 Regional grocery powerhouse H-E-B is the latest to try to tackle the challenge of long lines at the checkout by putting a tech solution in the hands of its customers.

The San Antonio-based retailer has launched a mobile scan and go solution called H-E-B Go in seven stores in the Austin, TX area, according to CBS Austin. To use the technology, shoppers download and install the app on their smartphones. While shopping, users scan each item with their smartphone and bag as they go. At the end of the shopping trip, customers scan an app-generated QR code at a kiosk and walk out. The chain plans to roll out the technology more broadly in 2019.

A few major retailers have piloted different variations on scan and go technology over the years with varying degrees of success. With Walmart’s most recent attempt, for instance, visitors would scan and bag as they shopped and then show an associate their on-phone receipt on the way out. The chain nixed the project, however, after finding that customers would rather have cashiers do the work of scanning groceries. Customers also reported finding Walmart’s scan and go app difficult to use.

And, of course, the Just Walk Out (JWO) technology pioneered by Amazon, which allows shoppers to simply pick up products, leave the store with them and be automatically charged, has the retail world wondering if it stands to fundamentally change how people shop physical retail. Competitors like Zippin have also emerged to offer turnkey JWO solutions that purport to address weak spots in the Amazon Go infrastructure.

While not purely JWO, H-E-B’s kiosk- and QR-code-based solution bears a resemblance to one of the early and more successful contenders in the cashier-free convenience store space, China’s BingoBox.

But the issues of scale that arise when attempting to deploy such a solution in a full-sized grocery store could pose problems that the c-stores, with much smaller assortments and fewer customers at a given time, don’t experience.

DISCUSSION QUESTIONS:  Is H-E-B’s QR code-based solution a better bet than the fully automated Amazon Go-style JWO technology? Could H-E-B succeed with scan and go where Walmart has failed, and why?

Please practice The RetailWire Golden Rule when submitting your comments.
Braintrust
"This is another wait-and-see experiment."

"Eventually the Just Walk Out (JWO) technology will be the future of essentially all retail, but it will take a long time before it is economical."

"My concern would be theft, and it will cost H-E-B a pretty penny if they allow this to go through in all the stores."

The solution seems beneficial to the customer. (Fast and self-administered.) But it is possibly detrimental to H-E-B. (How does the retailer control theft?) The Amazon Go solution purports to control theft but it is more expensive to implement. This is another wait-and-see experiment.

Our local grocery store rolled out a similar app a while back and frankly I’ve resisted using it. Mainly because scanning my own groceries while shopping seems like one more thing to do while I’m trying to focus on not forgetting what it is I need to pick up. I usually opt for the self checkout if I just have a few items.

The Amazon Go concept however takes the burden almost completely off the customer and is the ultimate convenience. No scanning, just walk out. On the business side it will also do a better job preventing theft since it doesn’t rely on the customer to self report.

I like the technology to skip the lines, but the value of the system is in giving the customer control. Like a VIP pass, many customers will appreciate being able to skip the checkout lines…but I’m not sure it saves that much time overall.

What people don’t realize until they actually start using this kind of system is that they are now doing the scanning work while they are shopping. Instead of tossing the item in the cart, each item needs to be held up in front of their phone. That’s easy and fun to do when the tech is new, but I think when the novelty wears off, some customers will stop using it.

This really can’t easily be compared to Amazon Go as this has far lower investment costs and if successful, can be rolled out to all stores fairly quickly. As far as H-E-B’s likelihood of success, I wouldn’t bet against them.

I find it interesting how tech is transforming the “work” to the consumer. Deleting customer service and forcing the shopper to take on the responsibility of “doing business” is not a convenience. Living in New York City, I advocate for a “locals” line or VIP pass like you suggest Ken. Having to change my brain from shopping which should be creative into a functional process dilutes the experience and actually takes away from the shoppers relationship with the brand. Downloading apps and doing all the work yourself does not feel like innovation but a sexy way for retailers to optimize their costs by passing it to the consumer. Universal preference guidance, live recipe builders based on cart add would be more welcomed in my world. Personally, I have no interest in bagging my own groceries and scanning items while I am coordinating ingredients for a weeks worth of meals.

I vote for Amazon Go-type technology. Please don’t make we work while I shop. The QR code technology is simply replacing the cashier with the customer. That is not convenience-oriented.

Yep. My concern would be theft, and it will cost H-E-B a pretty penny if they allow this to go through in all the stores.

I believe the first iteration of QR was premature. Now is the time. QR has benefits that far outweigh just the checkout.

Eventually the Just Walk Out (JWO) technology will be the future of essentially all retail, but it will take a long time before it is economical. The H-E-B solution is a good alternative to give shoppers another way to checkout. It will likely appeal to consumers that like self-checkout but don’t like to stand in a line for the next available self-checkout machine.

Scan and go is not new. Remember when Stop & Shop piloted the cart-mounted Shopping Buddy back in 2003? Fifteen years ago! The challenge with any consumer-facing technology is to make it so easy for consumers that it becomes a habit. The success of H-E-B’s scan and go app depends on their goals. Since the technology investment is low because they are using consumer’s devices, it shouldn’t be difficult to achieve a positive ROI. I believe the cost of implementing pure JWO is still too expensive and the H-E-B solution looks to be a simple, low-cost alternative that will bridge the time until JWO becomes more viable.

My bet is on the JWO technology. While the technology develops and the price comes down, there’s an interim here where mobile scan and go is definitely viable. This is movement in the right direction for H-E-B. These days, you better start early or you’ll never catch up.

Interestingly, this Go vs Scan & Go has come up a number of times. From a customer perspective, the cost can be made minimal — and there are real benefits to tracking your buys. With tech like Wegmans and Digimarc’s watermark packaging technology, the ability to scan becomes even less of a task. Even NFC, RFID and other tech can make the scan/swipe the product a relatively low effort task for the customer.

Regardless, there is a segment of customers who will want to use this type of enablement and it competes with express lanes, self-checkout, and adequate staffing. It’s a far lower cost and more practical alternative than a full Amazon Go solution and can address the needs of this segment.

Braintrust
"This is another wait-and-see experiment."

"Eventually the Just Walk Out (JWO) technology will be the future of essentially all retail, but it will take a long time before it is economical."

"My concern would be theft, and it will cost H-E-B a pretty penny if they allow this to go through in all the stores."