Has forecasting for Halloween costumes become a scary trick? 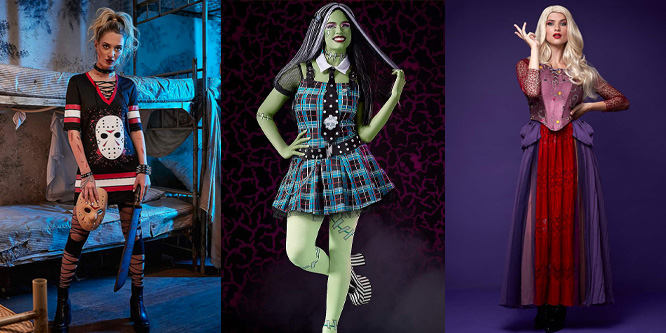 In an interview with Business Insider, Lesley Bannatyne, an author who has written extensively about the history of Halloween costumes, said television started to define pop culture in the 1950s, leading Little Orphan Annie, Bullwinkle and Disney costumes to become popular. Other trends over the years include “gory” costumes that arose with the popularity of slasher films in the 1980s. Dressing in “ironic” costumes, like a Tootsie Roll or McDonald’s character, marked the 1990s, while politician masks and “super sexy” takes characterized the 2000s.

A combination of tradition and pop culture trends continues to drive costume choices.

Pinterest found that, in sync with this year’s major launches, searches around “Stranger Things,” “Elvis,” “Top Gun” and “The Lord of the Rings” are trending on social platforms.

“The classics always hold a special place in our hearts, and this year this proves true following the growth in searches for Patrick Bateman, from ‘American Psycho,’ Harley Quinn — the Joker’s ex, and the season’s favorite, ‘Hocus Pocus,’” Pinterest stated. “Bold women are also topping 2022’s costume list with iconic figures like Anna Delvey, from ‘Inventing Anna,’ as well as Priscilla Presley, Avril Lavigne and Maddie and Cassie, the infamous duo from ‘Euphoria.’”

A survey of 2,000 adults from the U.K. from 19 Crimes wine found that some newer go-to Halloween looks included celebrities such as Beyonce, Billie Eilish, Kim Kardashian, Kanye West and Will Smith.

Google still found classic and nostalgic costumes, such as characters from eighties horror films, as well as Marvel and Star Wars franchises, continuing to rank high in searches.

A Wall Street Journal article said retailers are conducting extensive research, including analyzing fandom conversations on platforms like Reddit and Discord, to gauge which costumes may break out.

Holly Rawlinson, Spirit Halloween’s VP of licensing and business development, told the Journal that choice often comes down to how the costumes look on wearers, the character’s fan base and nostalgia.

DISCUSSION QUESTIONS: What do you think have been the most important factors driving the choice of Halloween costumes in 2022? Is the forecasting process for costumes the same or different from those used by merchants to make everyday fashion merchandise decisions?

Please practice The RetailWire Golden Rule when submitting your comments.
Braintrust
"The need for individuality with the focus on social media is likely a big driving force in the shift away from traditional concepts. "

"This has always been the most difficult line of merchandise to predict, especially given that orders must be placed far in advance, and trends happen in real-time."

6 Comments on "Has forecasting for Halloween costumes become a scary trick?"

The need for individuality with the focus on social media is likely a big driving force in the shift away from traditional concepts. There will always be some last minute surprise trends, such as Squid Game last year, where no licensing deals or costumes were to be found so Halloween goers had to get creative. That show took off well beyond expectations and surprised the licensing world. This year I’ve seen several Tom and Giselle divorce costumes, and I assume there will be several more surprises.

I would guess that predicting Halloween costumes would be harder than predicting fashion trends because fashion designers leave a path to follow.

Halloween costume designers can’t take their eyes off of pop culture. Once they decide on what’s hot they have to create and accessorize costumes that are both wearable and sellable for a wide variety of people. It can’t be easy.

In Halloween costumes and in overarching fashion, there is an interesting juxtaposition. There is a drive towards radical individuality, yet an overarching need for “the group” to think the wearer to be creative, clever, unique or a trend setter. Whereas in the past, brands, the media or even influencers defined what was in style, there is an increasing desire to be seen as the influential trend setter within immediately social circles or social media networks. There is also more access than ever to video content to create makeup looks, costume creation and DIY inspiration. So basic elements may come from a costume store or the closet, but it is all about how to modify and get creative to stand out.

I don’t know if the process is any different, but assuredly the results are: “Halloween costumes” has to be the ultimate example of a niche category.

Pop culture is so difficult to predict — just ask the streamers and content producers. This can make it extremely difficult for merchants, who need so much lead time, to determine what the “zeitgeist” will be paying attention to in October every year. But, there are enough signals early enough to allow capitalize on many major themes, and for those compelled to have costumes that are up-to-the-minute, they will — as ever — rely on their creativity for homemade costumes.

This has always been the most difficult line of merchandise to predict, especially given that orders must be placed far in advance, and trends happen in real-time.

Braintrust
"The need for individuality with the focus on social media is likely a big driving force in the shift away from traditional concepts. "

"This has always been the most difficult line of merchandise to predict, especially given that orders must be placed far in advance, and trends happen in real-time."