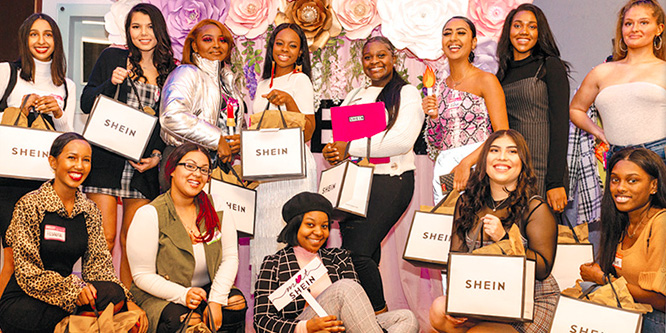 According to Piper Sandler’s Fall 2020 “Taking Stock With Teens” survey, the Gen-Z retailer ranked as the second favorite e-commerce site among upper-income teens, second only to the dominant player, Amazon.com. Shein ranked first among brands upper-income female teens are starting to wear, followed by PacSun and Lululemon.

Among the site’s attributes pointed out in coverage:

The knock on Shein is transparency. Little is known about the company, leading to wide speculation over how it churns out its inexpensive and trendy offerings. A source told Reuters Shein aims for a design-to-production turnaround time of three days, well below the three-week turnaround of Inditex, the parent of Zara. A Telegraph article speculated that Shein likely sources straight on demand from factories in China and may be capitalizing on trade agreements to keep prices low. The site doesn’t sell in China.

Quality and delivery can be spotty, according to some reports. Jess Sims, a freelance writer, wrote on stylecaster.com, “If 1,000 new items a day seems too good to be true, there’s probably a catch.”

DISCUSSION QUESTIONS: What do you think are the most important factors driving Shein’s rapid growth in the U.S. teen clothing marketplace? Do you think a lack of transparency will negatively affect its appeal going forward?

Please practice The RetailWire Golden Rule when submitting your comments.
Braintrust
"This is what any brand needs to do to stand out clearly in the eyes of customers and build a loyal following. "

"It’s entirely possible that teens are bored without their retail stores open — so Shein has a near term opening and are using it."

"In its best light, Shein feels like a shooting star: move at rapid speed, shine bright, burn out fast."

Shein has a trifecta of benefits that are driving its rapid success: low prices, 1,000 new styles every day, and a significant social media following. Their website also does a good job of offering multiple deals (percent off) to get first time visitors to sign up. Shein’s website looks classy for a low-priced offering and the company and the messaging appeals to consumers’ social and environmental consciousness. This is a trendy new site and it will be interesting to see how long it will last.

I don’t see much different here: It appears that Shein trades on everything that the other fast fashion giants have been doing for quite some time: selection, social media influencers, and price. They just seem to be doing it faster and cheaper, with greater selection. Unfortunately, it also appears that they are doing so with little regard for laborers, the environment, or sustainability — or, apparently, quality. I hope the suspicions are wrong but fear they may be right.

Whoever the people are behind Shein, they know what they are doing. The cost is low enough that parents can´t complain, the styles are contemporary and not the typical shoddy product that has been popular, the brand sounds like it has nice connotations, and the omnichannel messaging stays on point.

This is what any brand needs to do to stand out clearly in the eyes of customers and build a loyal following. I also like that they have not relied on heavyweight influencers but rather gone more widely.

If the clothing holds up to 20-30 washing cycles, then I think this won´t be a flash in the pan.

Talk about fast fashion. Yikes. I lived and worked in China for over a year consulting for a Chinese retailer, and the speed this article talks about is possible — sort of. When they say design to production in three days I am guessing they really mean test response to production in three days. And if they are manufacturing without testing they are making small quantities and then chasing what the customer responds to. Offering 1,000 styles a day in the absence of some kind of data would quickly drown most business models. So my guess is that the beauty of this model is that it is highly data-driven design. Influencers are pushing and the customers are pulling. And the appeal of the incredible amount of newness seems to be working. It was one thing when I lived in China to be within a couple hours drive of so many factories. The logistics were pretty simple and speed was a natural by product of those logistics. No boats or airplanes or customs clearance involved. So… Read more »
1
|
0
-   Share

I’m going to add to Dave’s statement. I ordered from Shein out of curiosity—the products are marketed very well, the reviews are often very good and they certainly show up everywhere with hard-to-resist lures. The products arrived and the fit was terrible, the quality worse. I tried to return all but one item and they basically said, “no, just keep it—our gift.” Which meant is was too expensive to send them back across the ocean. The one item I wanted to keep fell apart with the first wash. So, based on experience, Shein has a lot to model regarding “hooks” and their marketing and social strategy, but they don’t deliver. That will surely go viral as well so, unless that changes, I don’t see them becoming the next big success story.

Based on your personal experience, I agree that Shein won’t be a success story.

I checked with a colleague in China. It is available in China. The pricing is about the same as in the U.S., and is considered cheap by Chinese standards. It is also considered poor quality and is popular with the same demographic.

Shein has put together a pretty effective combination value proposition but if I had to isolate out one of the elements of that proposition I’d have to cast my vote for inclusion. Teenagers almost always think the worst of themselves and having a broad range of new, affordable, fashion items available in sizes that fit “real people” is a strong statement about the brand’s recognition of, respect for, and affirmation of young people at probably the most fragile time of their lives.

That’s an old Chinese proverb. It means “You get what you pay for.”

Shein has a few factors working for them: new brand brings cachet; more new items than you can keep up with means there is always something to explore; the constant discounts/codes/count downs drive a sense of urgency; and the influencer community gives them a sense of dazzle and authenticity. All good stuff in terms of getting noticed and off the ground in a short amount of time.

However rapidfire products begs a QA closer look. Also a Chinese based business where products are not sold in China is a glaring red flag. They seem to have a lot of stuff, literally, from lip gloss to toilet lights. But they also lack a core business strategy that will give them longevity. In its best light, Shein feels like a shooting star: move at rapid speed, shine bright, burn out fast.

If Amazon is the “brand” they’re displacing, the competition isn’t too stiff. And I’m intrigued that the other brands (e.g. Lululemon) aren’t exactly teen brands. It’s entirely possible that teens are bored without their retail stores open — so Shein has a near term opening and are using it.

Whether Shein has a workable business? I think that remains to be seen.

Let’s be honest here, everyone. SHEIN has not re-invented teen e-tailing. What it has done has taken online commerce’s already easy accessibility with ordering and combined it with what attracts the vast amount of consumers, young or old, and that is to buy things that they may or may not need via low prices and fast delivery. While what they’re doing so nimbly may make them startlingly successful, it also makes them rather deliberately insidious.

As others have already pointed out, at what true cost does all this flurry have? The bigger irony, doubled up with their added appeal to heretofore underserved customers, is it’s coming at a time when we are thinking/hoping/expecting younger people to be more conscious environmentally, economically and (we can only hope) intellectually. That it is an indicator, otherwise, of a company exploiting what might just be basic human nature (to get, and get, and get) is the real SHEIN story.

I agree with David Neumann about why the site is popular. The other questions of ownership, sourcing, and transparency are not questions that teens are likely to ask about any site that offers quick, new, affordable items unless quality falls below an acceptable level.

Braintrust
"This is what any brand needs to do to stand out clearly in the eyes of customers and build a loyal following. "

"It’s entirely possible that teens are bored without their retail stores open — so Shein has a near term opening and are using it."

"In its best light, Shein feels like a shooting star: move at rapid speed, shine bright, burn out fast."