Have men become the primary grocery shoppers in America? 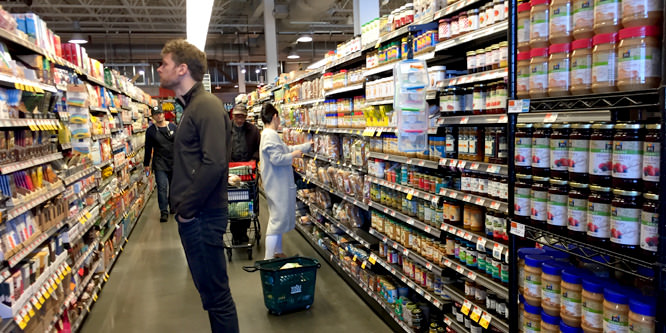 It’s been a longstanding practice for grocery executives to use the pronoun “she” when referring to the core customer shopping in their stores. If a new study from Men’s Health is to be believed, retailers may want to reconsider their descriptions as more guys report they are the person primarily responsible for grocery shopping in their households.

Eighty-four percent of men surveyed as part of the fourth “How Men Shop for Food” study said they are the primary grocery shoppers in their households. That’s a 19 percent increase over previous findings by Men’s Health. The survey was conducted online with Harris Poll, which queried men about grocery shopping, meal preparation, purchasing influences and other factors that affect their behavior.

“Men have an active role in each stage of the food purchasing process — before getting to the store, while there, and when cooking the food they’ve bought,” said Chris Peel, VP/publisher of Men’s Health, in a statement. “Food retailers are uniquely positioned to appeal to men throughout this cycle and to evolve their marketing plans based on this compelling data.”

Other findings from the study include:

There’s no doubt more men are grocery shopping today than in the past. Other studies conducted with both men and women, however, point to more of a balance in household grocery shopping duties than the male-only Men’s Health survey.

The Washington Post cited research by NPD Group, which found men are the primary grocery shoppers in 41 percent of American households. VideoMining put the percentage of men at 49 percent in answer to the same question.

DISCUSSION QUESTIONS: In what ways have grocery stores changed business practices to address the increase in male shoppers over the years? Where do you see opportunities for grocers to improve?

Please practice The RetailWire Golden Rule when submitting your comments.
Braintrust
"The focus needs to be on why the customer should buy this product regardless of whether they’re the woman or the man."

"I believe the challenge with more men in the store is to better understand how they navigate the aisles and shelves and leverage that knowledge."

"...both men and women will shop from lists. However with men perhaps being more likely to want to dash in and grab something..."

12 Comments on "Have men become the primary grocery shoppers in America?"

There is no doubt that today’s world is quite different from how things were 50 years ago. People are living longer, getting married at a later age and having children later in life as well. It’s no wonder men are more involved in food shopping, whether they are single, married or living with a partner because lifestyles have changed so much.

I don’t know that supermarkets need to cater to men or women separately because it’s all about the customer’s food likes, dislikes and food experience. The focus needs to be on why the customer should buy this product regardless of whether they’re the woman or the man and retailers should certainly stay away from any presentation that stereotypes customers, as in only showing pictures of moms or moms with their kids. Men have proven their value as food shoppers and grocery chains need to have equal appeal to both sexes with how they market themselves and their products.

The grocery trip is shopping for essential items, but in-store shopping gets really interesting when the essentials ring around the perimeter and the aisles provide products with other benefits. The Men’s Health study was no doubt biased toward nutrition-conscious men, whose numbers are growing fast. Grocers will be well served by providing product information and presenting the widest possible view of value in products.

In my opinion most of the innovations and improvements have benefited both genders. All those quoted statistics sound meaningless and empty. An increase in men watching cooking shows? Probably by default because there are more cooking shows. I’m sure the percentage of women watching cooking shows has also increased. Thirty-five percent of men were influenced by something they saw online? Surprised it wasn’t 100 percent. Of course the results will show men are doing more grocery shopping. The survey was aimed at men about grocery shopping. A man not interested would not take part in the survey.

I would also add that men are more likely to overstate their contribution to tasks like grocery shopping. My husband still marvels that I notice when we are running low on staples and think to pick up replenishments. He waits until we are fresh out then, bless his heart, might remember to go out and “slay” (his word) some groceries.

I’m not sure that much needs to be changed to cater to more men shopping than in previous years. Couples tend to share household chores more and both men and women will shop from lists. However with men perhaps being more likely to want to dash in and grab something for tonight’s dinner without really knowing what, examples like Trader Joe’s display for Tricolore Salad (with all the necessary ingredients beautifully arranged in one place and perhaps an additional recipe sheet provided) could be a helpful attraction. Offering help with a quick solution to an immediate challenge might be a good move.

I work with retailers on opening small supermarkets on college campuses. We know from our research the probability of success is greater when the percent of the population is skewed higher with females and all that implies. Lesley’s comment about grab-and-go is right on. Men might be doing a lot of shopping but basket size is higher with women. A university with 55 percent women gets our attention. If it’s 55 percent men we usually pass.

Grocers are flexible, and are always looking for new ways to serve consumers — just look at the plethora of meal pickup options available in any store. That said, it’s a stretch to suggest that men are doing the grocery shopping … I’m sure these same men will brag about cleaning the house, too.

Have men become the primary grocery shoppers in the U.S.? Nope. Men are definitely more involved than in decades past, however the vast majority of primary food shoppers in heterosexual couples are women. Still, food stores can leverage the increased interest of men in shopping and meal prep by catering to their interests better and more frequently than the periodic snack displays for the Super Bowl. Demos and on-floor cooking classes geared toward and led by men can be very successful. Other more male-centric categories can be featured more consistently and prominently.

There are many reasons that determine which party is the primary shopper. In my house my wife is the primary shopper. She wants it that way, saying I am not able to follow her list without adding too much “garbage stuff.” She is right. Maybe I plan it that way. I don’t know. With the trend of people living single longer and getting married later there has been a change in the shopping experience. Both men and women have to be better at it than ever before. Even I admit I am better than I was several years ago. And I am proud of it. I feel as if I have accomplished something I was not able (or did not want) to do before. My guess is that more men will be doing more shopping in the years ahead.

Yes! My husband buys a lot of impulse items and cool packaging.

Nothing different needs to be done for men vs. women shoppers. The real variances are online vs. in-store, cooks vs. assemblers, experienced vs. novice, healthy vs not-so-much. Both men and women fall on both sides of these polarities.

I remember working on packaging for Hunt’s Manwich and the need to simultaneously convey heartiness for men, but still attract the attention of women at the shelf. The message for men had to be understood by women, since they were more likely to be the person in the store. As more men are the shoppers, the same challenge exists, i.e. convey messages that appeal to the designated “user” and attract the attention of the actual buyer (possibly the same person; maybe not).

For those in the trenches I believe the challenge with more men in the store is to better understand how they navigate the aisles and shelves and leverage that knowledge. That’s the way to insure there is an opportunity for brands to get attention from both sexes.

Braintrust
"The focus needs to be on why the customer should buy this product regardless of whether they’re the woman or the man."

"I believe the challenge with more men in the store is to better understand how they navigate the aisles and shelves and leverage that knowledge."

"...both men and women will shop from lists. However with men perhaps being more likely to want to dash in and grab something..."