How can retailers take the stress out of giving and getting feedback? 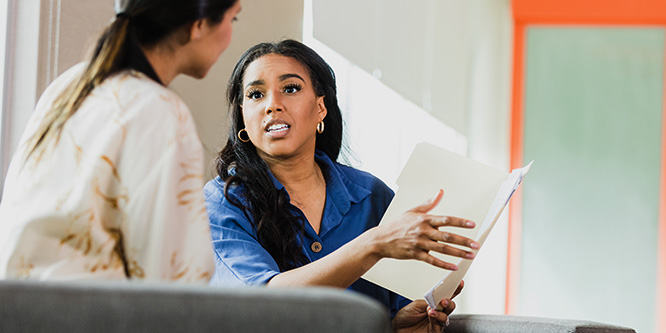 A new university study finds that, while high-empathy leaders tend to be better at giving negative feedback in a helpful manner, they become more distressed, inattentive and less effective at their jobs afterwards.

In a penned article in Harvard Business Review, the researchers led by Ravi Gajendran, Florida International University’s chair of the global leadership and management department, wrote, “Since being more empathetic essentially makes leaders more likely to ‘catch’ others’ emotions, a strong negative emotional reaction from the recipients could spill over onto the high-empathy leaders, affecting their own emotional states and thus their performance.”

Their basic advice for such leaders is to set aside some recovery time.

Less empathetic leaders, conversely, are less likely to take their employees’ perspectives. They are often energized by giving negative feedback and thereby incentivized to do more. Coaching lower-empathy leaders to be more compassionate was recommended.

Feedback is crucial for developing employees and improving their performance but remains inherently stressful for both the giver and receiver. Provoking strong emotions and often defensiveness, the stress involved in receiving feedback can make the situation counterproductive and may even cause a decrease in performance.

Feedback often likewise fails to inspire employees. A recent Gallup survey found that only 26 percent of employees strongly agree that the feedback they get actually improves their work.

Among the tips for delivering feedback to employees is to make it a frequent event so that the annual review, if necessary, offers no surprises. Being timely, sincere, specific and giving positive feedback first are other common suggestions.

Writing for Psychology Today, Mira Brancu, who heads a leadership and team development consulting company, said reactions to feedback often depend on two factors: the receiver’s relationship with the person giving the feedback and differences in perspective.

Her core advice, “Approach with a curious mindset, first asking questions and seeking to understand.”

DISCUSSION QUESTIONS: What tips would you offer for delivering as well as receiving feedback? Why do you think the feedback process is often so nerve-racking for both sides?

Please practice The RetailWire Golden Rule when submitting your comments.
Braintrust
"Many employees feel they may be reprimanded for giving negative feedback and this instills fear. Honest feedback is hard to get. "

9 Comments on "How can retailers take the stress out of giving and getting feedback?"

The manager must first understand company policy on how feedback is to be provided and at what depth. It is important to avoid creating stress, prepare in advance, and demonstrate that this is an important dialogue. The manager must invest in understanding the employee’s own unique goals and expectations plus how willing they are to receive feedback. In turn, the process can yield positive results and be less stressful.

Many store managers do a great job regarding receiving general feedback but many lack the training rooted in empathy.

Many employees feel they may be reprimanded for giving negative feedback and this instills fear. Honest feedback is hard to get.

The stress of the shop floor today is nothing like we’ve ever experienced. Planning for the right resources, unexpected staff shortages due to COVID-19 exposure, and stocking shelves as well as new duties from a fulfillment perspective have increased stress levels for management as well as frontline store staff. Retraining rooted in empathy is a necessity.

So often the environment around feedback is blame oriented. So often, the feedback attacks personal abilities or weaknesses.

Feedback needs to be focused on an assumption that everyone wants the same thing – to do the right thing for the customer and company. When we do that, it removes the blame and personal in order to focus on achieving a shared goal.

Unfortunately, most formal feedback mechanisms are not structured this way – but carry the implication of “someone screwed up” rather than “what makes things better.”

Store managers should model excellent professional behavior and customer service. There’s really no need for over-explaining what you expect if you do it yourself. For those store managers who have very little interaction with customers as an example, well, they should not be store managers in the first place. Praise in front of others, correct in private. That’s the rule. Forget annual or even quarterly reviews in front-line retail. All feedback should be given as soon as possible, while still following the rule about where to give it. That’s the only way to improve performance. If the manager has a good relationship with his or her staff, feedback should come naturally. It is really all about telling people what they need to know and not what they want to hear. Easier said than done. And when a more formal performance review is unavoidable, having objective metrics available to both the employee and the supervisor before and during the session is essential. Done right, these review sessions — combined with showing them how it’s done right… Read more »
4
|
0
-   Share

It’s interesting that the article starts out by calling it “negative” feedback. How about “constructive” feedback? Giving and getting feedback is never going to be a stress free process. But timeliness can go a long way in softening the process for everybody. Talk sooner than later. Don’t wait for formal reviews. Talk in real time. Coaches don’t wait for the game to be over to challenge performance. It’s in the moment. And continuous. Fine tuning along the way is far more productive than waiting and trying to make big course corrections on down the line.

Negative feedback is an opportunity for learning and to strengthen trust if handled correctly. This is an area in which virtually every retailer could spend more time training managers.

A lot of employees feel they can’t give honest feedback for fear of retribution.
Companies say they want open feedback and communication, but most have not done a good job at letting employees know they will not get singled out for being honest. It’s a rather delicate slope and hard to manage unless you have the company’s 1000 percent commitment on it.

Framing feedback as enriching growth opportunities for workers and companies could reduce the drama. Position it as a mutually-beneficial conversation rather than a threatening Judgment Day.

Compassion for both sides can help. After two years of non-stop turbulence, everyone is trying to do their best and growth takes time.

Negative feedback for most employees is synonymous with failure and subsequently fear. For retailers, using feedback as a learning tool is not only stressful, but also much less valuable due to high turnover rates, part-time, and seasonal workers. Not hitting your pick and pack quota numbers for the day typically has monetary disincentives – including termination for many retailers. These are not learning environments nor is failure tolerated. Store managers need to shift thinking to problem solving and allow for flexibility and in turn accept some inefficiency of their employees to cultivate “safe” environments for employees to engage and grow.

Braintrust
"Many employees feel they may be reprimanded for giving negative feedback and this instills fear. Honest feedback is hard to get. "