How to make a big deal out of a chicken sandwich 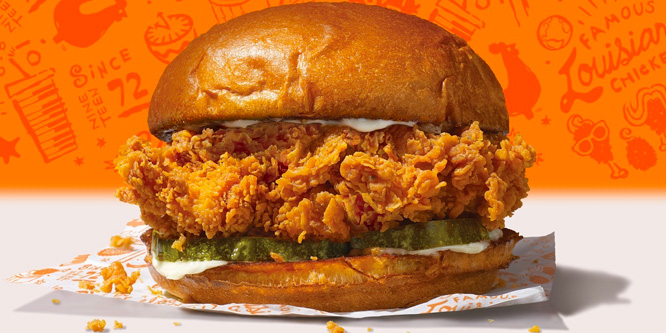 With an endless number of new product and concept introductions by retailers and brands each year, retailing execs might want to take a close look at Popeyes and its new fried chicken sandwich to find a recipe for success.

It’s just a chicken sandwich, after all. Not that there’s anything wrong with that, but many fast food chains have sold chicken sandwiches for years if not decades. It flies in the face of the obesity epidemic and any pretense of eating healthy. The ingredients don’t sound special: fried chicken breast, (brioche) bun, pickles and sauce. And yet Nick Kindelsperger of the Chicago Tribune ranked 26 fast food fried chicken sandwiches (yes, there are that many) and ranked the Popeyes version #2, behind only Shake Shack’s.

Popeyes tweeted about the new sandwich on August 12 and started a craze. The tweet itself was pretty simple, “Chicken. Brioche. Pickles. New. Sandwich. Popeyes. Nationwide. So. Good. Forgot. How. Speak. In. Complete. Sandwiches. I mean, sentences.” The Tweet included a picture of a gigantic chicken sandwich and currently has 31,000 likes, 5,200 retweets, and over 6,700 comments. It inspired Twitter reactions from Chick-fil-A, Wendy’s, Shake Shack and many adoring consumers.

Fans have stood in long lines at Popeyes around the nation, there were many reports of the sandwich being sold out and at least one Popeyes manager reportedly passed out from exhaustion.

The executive editor of Restaurant Business, Jonathan Maze, told The New York Times that fast-food brands need to “play the social media game,” although he doubted Popeyes would make much of a dent in Chick-fil-A’s sales, which were up nearly 17 percent last year.

My neighborhood Popeyes has forsaken me 😩 pic.twitter.com/G8r7oYserb

DISCUSSION QUESTIONS: To what do you attribute the roaring success of Popeyes’ new fried chicken sandwich? How can retailers and brands emulate the social media and overall success that Popeyes’ had with the launch of their new sandwich?

Please practice The RetailWire Golden Rule when submitting your comments.
Braintrust
"A combination of the right tone, right time and right place, plus a good product and lots of help from Popeyes’ competitors! "

"There are lines out the door. And you can buy the sandwich on Sundays."

Popeyes got lucky. You can’t predict what’s going to go viral. Stay engaged with customers through interesting and clever posts, and you might also get lucky once in a while.

Yes David, they got lucky. No question about that. But they also did something all companies forget much too often. Instead of trying to reinvent the wheel — they simply concentrated on making the best wheel (chicken sandwich) they could. As Al pointed out, there’s nothing unique about the structure of the sandwich. But in my opinion, the toughest job in a restaurant after chef is fry cook. Knowing how to consistently run a fryer well is an art form that QSR operators have to make repeatable and routine. It’s very hard to do — but look at the QSR stars and that’s what you find. McDonald’s fries, Krispy Kreme donuts, KFC original recipe and now Popeyes chicken sandwiches. Oh, and Chick-fil-A does a pretty good job too!

Despite those who are interested in only eating healthy, there are millions of people who are more content eating what they like, and fried chicken is one of their favorite foods. Popeyes tapped into a successful way of communicating — social media — and it worked. The problem with social media is that no one ever knows what will catch on and what will not. Some of the best tweets and internet ads have gone unnoticed while others have gone viral, yet no one has figured out how to make it happen. The point here is twofold. First, stay with what works for you. Popeyes put out a new fried chicken sandwich. They didn’t go after the healthy food eaters but instead stayed within their own audience. Second, be creative and try new ways to get your message out. Social media can work, and this is one time when it has worked very nicely.

A combination of the right tone, right time and right place, plus a good product and lots of help from Popeyes’ competitors! Social media marketing is unpredictable. It’s a volume game where you keep working it with clever stuff knowing that eventually you’ll hit the mainstream chord. Fun to watch.

Yes, Popeyes got lucky — but the sandwich is pretty darn good, too…

One of the things Popeyes had going for it was a customer base that already liked their chicken. The hole in their menu was the lack of a chicken sandwich which their competitors all had.

The clever introduction notified their customers and made the rest of the world aware that they had finally created a chicken sandwich. It certainly helped that Chick-fil-A and others added their comments, further raising awareness of the product. Add shortages in few restaurants and you have the media buzzing.

It looks like luck, but Popeyes filled a natural hole in its menu with what is apparently a good product. The use of social media and PR didn’t hurt, either. It would be interesting to compare Popeyes and Chick-fil-A locations to see if there is much overlap — that could be a factor. No doubt the “trial” stage has been a big success, but let’s see how the brand’s market share shakes out over time.

Popeyes’ tweet was clever and eye catching. The rest of the interest comes from a simple sandwich in times of more and more complex products with new complex combinations of flavors. Twitter has become very popular in the political comments world, and its appeal is spreading to more areas like new product introductions. Retailers and brands should take lessons from Popeyes’ sandwich tweet. However for the interest to last, the offering being presented must have staying power with consumers. Popeyes’ chicken sandwich campaign’s ultimate success is yet to be written.

Twitter has become the new battleground for brands to take it to a new level. One never knows what it takes for something to go viral. Somehow, Popeyes has caught magic in the bottle by hyping up their chicken sandwich and going head-to-head with Chick-fil-A and other brands.

Despite all the momentum building around healthy, holistic, sustainably-sourced organic foods, there are plenty of folks who frequent fast-food operations and love their fried chicken sandwiches.

There are lines out the door. And you can buy the sandwich on Sundays.

Luck? Maybe. But luck in sales parlance is when preparation meets opportunity. Popeyes was prepared and the opportunity came. There was a full column in our local paper by a well-respected columnist yesterday, all about Popeyes. I have never eaten at Popeyes. I don’t know where the closest one is. But I am ready to find out what the hype is all about. Have no fear Chick-fil-A. I will be back.

I’ve been thinking about this, thus the later reply. I do think there is real luck in timing here for Popeyes. After all, Arby’s heavily promoted “we’ve got the meats … for sandwiches,” and right after that Popeyes launched the chicken sandwich, and boom. I also think Popeyes felt they needed this shot over the Chick-fil-A bow. And then, we all remember “Where’s the beef?” I guess it is the right combination of the new, slogans and timing.

Many years ago there was an article in the NYT Business section about “what should McDonald’s do wrt significant drop in sales?” Since then, they’ve gone discount, but one of the respondents said they should double down on burgers, but make them totally awesome. I’ve felt the same about KFC. It should be totally awesome chicken.

So there is plenty of opportunity in the chicken segment of the fast food industry to offer great food, since most of the operators don’t.

All the social media in the world wouldn’t have mattered if Popeyes didn’t commit to creating a superior product.

Winner, winner, chicken dinner! Or, should I say, chicken sandwich! Popeyes is an iconic brand in the chicken business. They are recognized for a great tasting product. And their social presence and strategy is working for them. It’s funny and catchy. This is a delicious looking sandwich that I can’t wait to try.

The chicken rage has eclipsed beef burgers. As some fast food franchises wither away and lose popularity, others are primed for the future, in many cases driven by technology. For example PDQ Chicken, headquartered in FL, which has about 75 units, is rapidly growing. (Launched by BOB BASHAM, famous for Outback Steakhouse.) Their most recent expansion is in the greater NY metro region where highly credentialed fine dining restaurateur DEAN POLL is making his first investment ever in fast food. He has opened Farmingdale, Long Island — a major transit hub and a second coming soon in Westbury, Long Island with more to follow. PDQ–“People Dedicated to Quality” promotes serving only fresh chicken — not frozen product like many of its competitors. Part of its brand is its unique presentation about healthy eating, smart choices, and wise options.

Braintrust
"A combination of the right tone, right time and right place, plus a good product and lots of help from Popeyes’ competitors! "

"There are lines out the door. And you can buy the sandwich on Sundays."