IKEA asks, will virtual inventory be key to the new urban showroom? 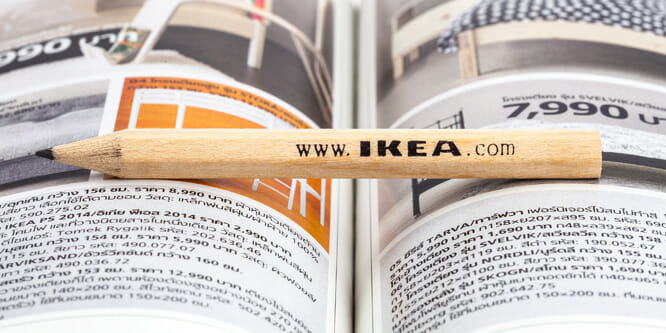 The completely unique experience of shopping at an IKEA store is part of the brand’s appeal. But at World Mobile Congress, the chain gave a demo of a futuristic small-concept store that is far different from IKEA’s familiar labyrinth — and from other store concepts out there as well.

In partnership with Accenture, IKEA demoed a tech-enhanced store which, according to Retail Detail Europe, fits the chain’s entire expansive catalog into a small-format location. The walls are said to “double as screens filled with product information” and visitors can use an RFID-enabled version of the iconic IKEA pencil to make product selections, check out and specify if they will pick up the physical product or have it shipped.

A tweet by French tech journalist Simon Chodorge features a video of the demo. In it, the journalist can be seen tapping an RFID-enabled version of an IKEA pencil on active pads on tables near touch screens, which appear to be adding items to a shopping cart. The journalist then visits a central touch screen to check out.

The chain has no plans to implement the experimental endless-aisle concept at this point, but the exercise demonstrates the extent to which technology could be used in small-format urban stores to give customers access to a big box store’s worth of inventory.

Though the video in the Tweet didn’t picture the use of AR, as was billed in the demo, AR might be another interesting way to display and order from a large assortment in a small space.

In IKEA’s case, such enhancements would be a futuristic next step for a more practical concept the chain is developing for city dwellers. In 2016, IKEA opened 20 pickup and order point locations globally. The locations allow visitors to shop online and then have their purchases delivered to the smaller, closer stores. The stores also feature computers to browse the e-commerce section, and a limited product assortment for immediate purchase.

DISCUSSION QUESTIONS: Is the use of in-store touch screens and AR to display product available for purchase a good way to offer extensive inventory in smaller, urban stores? Would customers shop showrooms with primarily virtual assortments available rather than physical product?

Please practice The RetailWire Golden Rule when submitting your comments.
Braintrust
"I believe this urban virtual store format can be a solid element in IKEAs future growth, especially if combined with DIFM or assisted assembly in-home"

"This is an additive strategy of expanded shopping and format choices rather than limiting customer choices."

"This style of shopping is really exciting for both urban and highly condensed cities that aren’t going to to get an IKEA store in their town."

16 Comments on "IKEA asks, will virtual inventory be key to the new urban showroom?"

Progressive retailers like IKEA are experimenting with a wide range of technologies to create new ways for shoppers to interact with their brand and products. The use of AR and touch-screens to present IKEA’s expansive product offering makes good sense, especially in highly concentrated urban areas. I think virtual showrooms will be very helpful to shoppers in narrowing their product search, but I suspect that many will still want the tactile experience of touching and seeing the physical product, especially larger items like furniture.

The answer to the first question may be a yes. Using AR would allow the customer to see a broader selection of inventory in small format stores. However, I believe that to move many people from considering to buying, the stores would have to have some representation of the items they viewed. The physical samples available may be very small but would allow the customer to touch and feel the item.

The answer to the second question depends on the customer’s ability to choose one over the other. All other things being equal, given the choice customers would rather go to a showroom where they could see the products in real life rather than AR.

There is no doubt that stores of the future will be smaller, have less inventory and allow customers to see items but rather than bring them home they will be delivered almost immediately. This AR tool is another step in the process that will enable the retailers to provide more product options without the need of having the items in the store. However, there will be limitations and what all retailers need to focus on is how much technology they introduce that will give the customer no reason to come to the store. Stores will always allow the customer the opportunity to see, touch and feel items. Online as of yet cannot replace that. The store also should provide an outstanding and memorable customer experience delivered by well-trained associates. When we allow technology to diminish those opportunities and eliminate the “service” part of the selling equation, we are reducing the chance of establishing long-term brand loyalty and simply becoming another company to look at with the decision solely being made on product and price. Yes,… Read more »
0
|
0
-   Share

I believe this urban virtual store format can be a solid element in IKEAs future growth, especially if combined with DIFM or assisted assembly in-home. Adding AR makes it a better bet.

Smaller stores with more consumer engagement leading to conversion … Let’s do that! Condo and subdivision real estate sales offices have mastered this concept and a page from their playbook can help many retailers. Pop-up and store-within-a-store offer inexpensive ways to test and refine such a strategy appreciating that the critical success factor is to be focused on gaining and acting on insights.

Space for big box stores in cities is scarce, so they have to innovate. Target, IKEA and others are reimagining the retail experience, while counting on their brand identity to bring consumers into a small format store. I expect other retailers to follow their lead.

This makes a ton of sense for IKEA. Most of their more complex furniture offerings are just variations on a theme anyway. Which combination of puzzle parts will best fit my wall space? As long as there is one example to examine physically for assembly process and finished look, this is just as functional as five different configurations in a display setting.

There are certain retail segments that may lend themselves well to smaller urban formats based on multiple technologies (AR, VR, RFID with touchscreens, etc.) as the IKEA demo illustrates. Perhaps furniture and luxury goods (especially apparel, take the Rebecca Minkoff store powered by Oak Labs technology for example) are the prime candidates for this. One issue that comes to mind we rarely talk about is whether these formats become victims of their own success. What happens in these smaller stores when 100 people want to come in and use the technology? A good problem to have but difficult to deal with potentially. We’re seeing many examples of this approach today. Macy’s and their VR-based furniture showroom experience. Rebecca Minkoff with their RFID based digital mirrors and digital fitting rooms. Neiman Marcus and Sephora leveraging various digital mirror technologies. And so on. I expect many more to come as retailers find the right mix of technology, product and physical space to engage with their customers. If nothing else, this retail revolution should produce an even wider… Read more »
0
|
0
-   Share

If you can’t bring the customer to your large mega store warehouse, why not bring the store closer to your customers in a significantly smaller footprint while engaging a different set of senses? The ongoing trend to move from suburban to urban living and the rise of driverless vehicles necessitate these types of format moves.

This is an additive strategy of expanded shopping and format choices rather than limiting customer choices. If implemented, it would positively change the economics of store expansion in this important category while shifting operational focus to inventory movements and speed of urban deliveries.

Maybe I should say “see my comments about the store as media”? We are really talking about the same thing and it isn’t just for the urban environment. In 10 years or so, successful retailers will be using interactive tools. And more important than that, investing in interactive engagement with the shoppers rather than inventory using the “stack them up and sell them” philosophy.

Kudos to IKEA for taking the steps to engage customers where they live. As urbanization continues to grow, pickup points and having more location presence (albeit smaller) is important. There are many studies showing that a physical store actually drives an increase in online shopping (good for IKEA).

Whether shoppers will go to a store for a virtual experience? YES they will. Capitalize on the novelty factor to get customers to try it. Then keep them coming back because of the great customer experience. Nice example of using omnichannel services to the max. Kudos to IKEA for thinking out of the big box!

Part of this discussion should really be about why IKEA would need a physical store footprint if they are using what essentially amounts to a virtual reality store or inventory selection. AR is designed to eliminate the need for brick-and-mortar stores and the real estate they require, yet IKEA still wants to keep the consumer locked into driving, parking and finding their store when they could really be driving more customers into their virtual AR showrooms and enhancing their AR experience if this virtual concept is to become part of their urban showroom.

This style of shopping is really exciting for both urban and highly condensed cities that aren’t going to to get an IKEA store in their town. I can see a future day where we visit one big warehouse shared by multiple companies and customers select what store they want to shop using AR. Each time you walk through the store you experience a different showroom and add your selections to a single cart, checking out at the very end. The ultimate one-stop shopping experience.

I love this concept. And a future of virtual showrooms in-store is definitely part of the future. That said, it does need to be part of a broader in-store experience. Screens, AR and at some point VR will be available to a critical mass of users at home. It’s how those technologies come together with associates in-store that’s going to make it effective.

In some, I think ultimately superficial ways, IKEA might seem like an ideal candidate for a virtual store. Few of the products sold actually come off the showroom floor, and since the furniture is already disassembled/packaged, it can easily be shipped (or at least easily compared to something that isn’t).

That having been said though, I can think of few things (than furniture) where it’s more important to touch and sit on an just get “the look” of it … something that I don’t think can ever be replicated in a “virtual” experience. Of course if it’s a small area that can’t support a normal IKEA, then maybe it’s better than nothing.

Braintrust
"I believe this urban virtual store format can be a solid element in IKEAs future growth, especially if combined with DIFM or assisted assembly in-home"

"This is an additive strategy of expanded shopping and format choices rather than limiting customer choices."

"This style of shopping is really exciting for both urban and highly condensed cities that aren’t going to to get an IKEA store in their town."