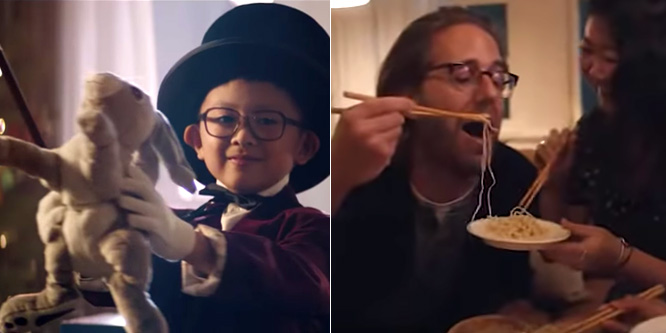 Tis the season to assemble flat-pack furniture. At least that’s what IKEA, the international retail furniture giant, is hoping for this holiday season in the dozens of countries where it operates across the globe. How IKEA goes about driving traffic to its stores and online during the season is not the same in every market, so we’ve curated a short list of commercials for your review.

In its “Maybes” spot for the U.S., IKEA looks at the different ways Americans celebrate the season. The spot, which has generated more than 83,000 YouTube views, concludes that the diversity of the nation, as evidenced by our holiday traditions, is “what makes us great.”

IKEA Canada’s “Magic Man” spot concentrates on the expressions of love and giving through the story of a young magician and his family. The spot, which has been viewed more than 392,000 times on YouTube, does not include a voice-over, but instead uses a soundtrack of Verna Felton singing “Bibbidi-Bobbidi-Boo” from Disney’s 1950 release of “Cinderella.”

In its home market of Sweden, IKEA also uses a kid magician as the creative focus of its holiday season spot. While “The Little Magician” commercial doesn’t include a Christmas tree or any other overt nod to the season other than a family gathering around a table, it does remind viewers that they can “find furnishing that lasts through the holiday season” online. (You’ll understand when you view the spot.)

DISCUSSION QUESTIONS: What is your critique of the three holiday commercials presented here from IKEA? Which do you think is most effective from a branding perspective?

Please practice The RetailWire Golden Rule when submitting your comments.
Braintrust
"Maybe because I'm a sucker for the holiday season, I enjoyed each of these."

While they are different, I like all three. The common theme running through all of them is the importance of family and friends over the holiday season. That’s a message everyone can get behind.

I suppose it all comes down to how you interpret the idea of “brand.” If you mean you want people to remember IKEA, then “Maybes” — the first spot — is probably the most effective. If you define the exercise as representing the brand values then all three work, although I thought the trans-generational messaging of the “Magic Man” spot was perhaps a touch stronger than the other two. They were all well done.

IKEA always does a great job with TV commercials, I like all three of these. Family. Magic. A memorable song. What’s not to like?

Weaving item names throughout the commercials is effective but not in your face; it’s a subtle reminder that IKEA sells more than ready-to-assemble furniture.

Maybe because I’m a sucker for the holiday season, I enjoyed each of these. I appreciated that the brand took a background to the messages of celebration, connectedness, family and friends and didn’t try to be so arrogant to present itself as an integral force to each of those.

I read that it was a coincidence that both Sweden and Canada used a magician kid. What a great nod to your global brand being aligned if you accidentally produce almost identical creatives.

Interesting approach. The magician versions get too carried away in the magic story. As uplifting as the child magicians are, IKEA leaves a weak connection with their wares as part of the story — I can’t see it increasing store traffic as much as alternative approaches.

But the “Maybes” spot seems to hit a tremendous number of the right buttons — and the idea that there’s goods at IKEA for every situation is an excellent set of messaging.

Great production in all three — and the first is the best without challenge, to my mind.

IKEA does a nice job in all three spots on focusing on its customers, not necessarily its products. However, there are enough product references to remind its customers of products that solve problems and help them as families.

I must admit, I watched all 3 videos before I read that they contained pop-ups of the IKEA items in them. I didn’t even notice that! My sentiment after the first look through was that, although I liked the spots very much, I didn’t get the connection to IKEA. After re-viewing them, I now see the connection. Subtle enough to be totally overlooked though. Will these ads get people into their stores? Not sure. Will they think of items they may need for the home and holidays? Maybe. And that’s my 2 cents.

I agree that a store that sells things one normally wouldn’t give as a gift would seem to have a challenge; OTOH I would think that they’re being from Scandinavia — a cold, wintry place close to the North Pole — would open up all kinds of possibilities.

But let’s run with what they gave us. I think the results were mixed: labeling the items available was logical — presenting an obvious tie-in to the store — but it also broke up the continuity of the storylines. So given lemons, they gave us lemonade … just not particularly sweet lemonade.

(On a side note: those of us expecting pale faces and blond hair to dominate the Svensk version were in for a surprise … I can’t imagine a clearer example of the challenges marketers face as old paradigms fade.)

The “Maybes” spot is terrific for the American market and is pitched well for our current times in which recognizing the many ways Americans celebrate the holidays is crucial for any retailer to broadly resonate among consumers.

However, it is difficult for our very American-centric “experts” panel to judge what is effective in Canada or Sweden, so I won’t try. Given our panel’s agreement that the “Maybe’s” spot was very strong (for an American audience) I will make the leap that the ones for Canada and Sweden are equally effective for those markets.

My message: this is an example of American hubris. We cannot and should not dictate the messaging for other countries and cultures, and yet we often try. Our generally expressed lack of cultural intelligence is unfortunate and often limits American brands and retailers as they attempt to expand outside of the American mainland.

Braintrust
"Maybe because I'm a sucker for the holiday season, I enjoyed each of these."