IKEA says no to plastic 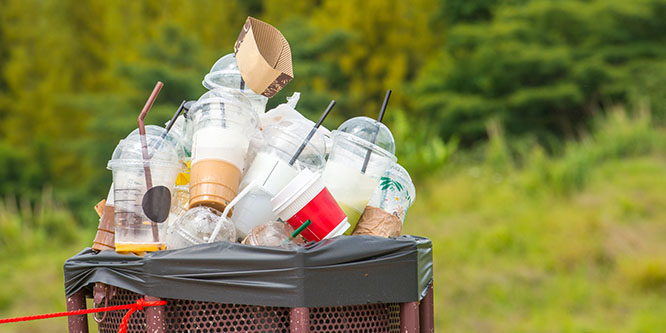 IKEA, the first major retailer to stop using plastic bags in 2007, has committed to getting rid of any single-use plastic by 2020. These include removing straws, cutlery, and drink stirrers from its restaurants, and garbage bags, freezer bags, 200-packs of straws and plastic containers and packaging overall from its shelves.

Finding an alternative to plastic-coated paper cups that have been necessary for hot beverages is one goal.

The move is part of an overall commitment to become “people and planet positive” by 2030. Other commitments include making products with renewable, recycled material only, and reducing more greenhouse gases than it emits.

“Through our size and reach we have the opportunity to inspire and enable more than one billion people to live better lives, within the limits of the planet,” said Inter IKEA Group CEO Torbjörn Lööf in a press release.

More cities, states and countries are looking for ways to reduce plastic consumption and its impact on litter, landfill overflow, marine pollution and overall climate change.

California became the first state to ban plastic bags in 2016 and similar bans or regulations have arrived across municipalities in other states. Exemptions often include bags to wrap newspapers, dry cleaning items, frozen foods, meat and fish.

Lately, the bans and regulations have spread to other plastic items due to heightened concerns over ocean trash. Seattle, Malibu and Miami Beach have passed bans on plastic straws. More calls are being heard to ban take-out containers.

Last week, A&W said it planned to eliminate the use of plastic straws by the close of the year, becoming the first fast-food chain in North America to do so. In January, Iceland, the U.K.-grocer, announced a five-year aim to replace all plastic packaging with trays made of paper and pulp.

But most plastic reduction pushes are coming from legislators. Retail groups have cited concerns over the economic impact of such bans on smaller businesses, and the economic cost of reusable alternatives ultimately falling on consumers, amid debates over the environmental-impact of alternatives.

DISCUSSION QUESTIONS: Do you expect to see other retailers follow IKEA’s lead in committing to eliminate single-use plastic? Do you see a rising plastics backlash driving an urgent response in the near-term or can retailers wait for perhaps more viable solutions to arrive in the years ahead?

Please practice The RetailWire Golden Rule when submitting your comments.
Braintrust
"The attention these moves garner will certainly give other retailers cause to consider following suit."

"Delaying change won’t make alternative materials any cheaper but will, at some point, create a PR problem that damages revenue."

"It is in IKEA’s brand DNA to lead this type of initiative, but it is clear that the legislative inertia is pushing them to act..."

14 Comments on "IKEA says no to plastic"

I commend IKEA for taking a bold stand and I see some other retailers following them, but because of the cost and inconvenience it’s doubtful we’ll see a high percentage of other businesses following. When you look at the many areas retailers should be investing in such as better security, store remodels, staffing and training to name a few, I see the need to eliminate plastics falling to the bottom of the list. It’s really up to Congress to take a stand and pass laws removing plastic, and we know how quick Congress is to respond. We also need to invest in alternatives, so we can eliminate plastic because we have something better. Hopefully in time this will happen because we need to protect our planet.

Reducing plastic in retail (and other industries) is a global trend that’s gaining momentum. There is both a push and pull to this trend — the push from leading retailers like IKEA eliminating the use of plastic and a pull as consumers use reusable bags or decline plastic bags at checkout. I doubt that we’ll see a backlash or an urgent response to the use of plastic, however, I do believe the reduction/elimination of plastic is a longer-term, evolutionary trend that I believe (and hope) will be sustained until plastic simply becomes unviable.

With consumers and legislators pushing to eliminate plastic waste, IKEA is choosing to get in front of the issue. The retailer will garner some good publicity, while showing competitors that going plastic-free can be accomplished.

To take the lead in bold new environmental initiatives is a great opportunity for retailers. Our planet suffers from waste and pollution caused by mankind. This issue will only increase. Young and more conscious consumers will be more affected by it. By showing leadership, a retailer can position itself as a caring and responsible distributor which could ultimately increase the brand value and loyalty.

IKEA has a long history in pioneering sustainability initiatives. The attention these moves garner will certainly give other retailers cause to consider following suit, which is at least some progress. I think (and certainly hope) others will also begin to implement similar policies, but it will take a long time and only when consumer demand far outweighs the inconvenience and profit loss to the business.

Yes, other retailers will follow IKEA’s lead in eliminating single-use plastics, like straws. McDonald’s is already considering this and once they discover a viable (paper?) solution, other retailers and QFCs will follow suit. The same holds true for bags and other solutions used to hold and carry products.

For those who think it is an inconvenience, Google “pacific ocean trash” for starters. From first-hand experience, I know we have reached a crisis point in many areas, including Florida, where I live. But, many people live in a state of denial, driving right past what they should be able to see, being careless with their trash disposal, failing to recycle properly, and generally viewing taking care of the environment as an inconvenience they can’t be bothered with. Eventually, it will be so up close and personal for them that they will have to face reality. In the meantime, it is left to governments, retailers, and manufacturers to reduce plastic and other pollutants at the source. So far, the efforts have been a drop in the bucket. I hope we will soon see retailers and brands truly step up to the plate and do the right thing. But, when you see a progressive retailer like IKEA planning to be people and planet positive by 2030, I don’t think that is fast enough.
3
|
0
-   Share

Despite its size and scale, IKEA has a good track record of environmental initiatives. This latest move is another feather in its cap.

The big users of plastic are in grocery and foodservice. That’s where there is a real challenge to balance the need for convenience, food safety and cost with the necessity to reduce environmental damage.

We’re seeing some very innovative solutions, including stores where you bring your own containers and Lush’s packaging free shop. However, it will be some time before there is a meaningful phasing out of plastics in this part of retail.

It is in IKEA’s brand DNA to lead this type of initiative, but it is clear that the legislative inertia is pushing them to act likely before they would have done so on their own (if ever). It is definitely the “right thing to do,” but the costs have been such that even those companies whose brand DNA support sustainable activities have found it difficult to move. The legislation inertia shows that it is probable that all businesses will have to comply to some level of reduction in plastic use. For the near term, we can expect moves like this to primarily come from retailers and brands for whom this fits a larger brand narrative. As plastic replacements costs come down, we’ll see others choose to make the changes as well.

Yes — along with this being the right move for our world, there is definitely an upside for companies to strengthen the emotional connection with their consumers by taking an active role in this conversation.

It is imperative that brands take the initiative themselves to build sustainable practices into their business because as much as consumers might agree with the cause, humans are notorious for just defaulting to past behavior and what is convenient.

Brands have the power (and responsibility) to create the new social norm.

Other retailers will follow (and have already been leading here) who place sustainability at the core of what they do. I’m having flashbacks to our thread on REI’s sustainability standards and remember being utterly baffled that sustainability was a “maybe” for retail whatsoever. Cutting down on plastic use is an everybody problem. There is no question that other retailers must follow suit eventually. There will simply be retailers who are late, embarrassingly late, or business-sinking-ly late, to the table.

Kudos to IKEA! It sure feels as if they read my recent article “Plastic waste might just be grocery’s new call to action.”

Single-use plastic trash (other trash too) is a huge problem and QSR, retailers, or retail trade groups that cry the blues over the cost of alternative materials need to stop moaning and become part of the solution. Delaying change won’t make alternative materials any cheaper but will, at some point, create a PR problem that damages revenue.

There are many alternatives including seaweed and land-based plant derived “green” (even edible) plastics. So rather than repeat the stagnant mentality that gave entry for Amazon to flourish, retail needs to seize this opportunity to demonstrate leadership and good stewardship and eliminate single-use plastics.

This appears to pertain mostly to the restaurant operation — certainly the forks, cups, stirrers, etc.; the “packaging from its shelves” may be somewhat broader — which given its eat-in nature doesn’t seem like much of an issue. I’m not sure how many comparable operations there are in other retailers, but it would be much tougher for, say, McDonald’s to attempt the same.

Most of the supermarkets I visit in Europe charge shoppers a few cents for plastic bags at checkout. Not surprisingly, almost every shopper I see brings their own cloth bag. This is a policy US supermarkets might consider if they don’t boldly eliminate plastic bags altogether.

Braintrust
"The attention these moves garner will certainly give other retailers cause to consider following suit."

"Delaying change won’t make alternative materials any cheaper but will, at some point, create a PR problem that damages revenue."

"It is in IKEA’s brand DNA to lead this type of initiative, but it is clear that the legislative inertia is pushing them to act..."