Is 7-Eleven using ICE to get rid of troublesome franchisees? 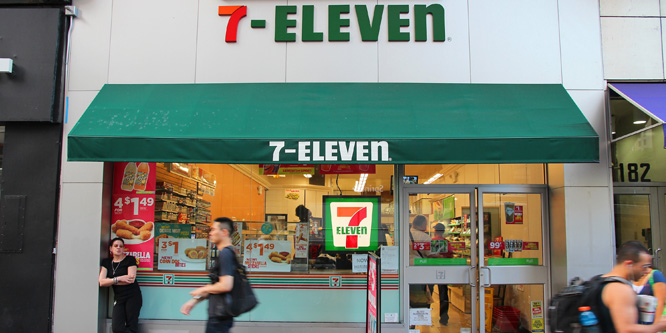 In January, the Immigration and Customs Enforcement (ICE) agency carried out raids at 98 7-Eleven stores in 17 states and in the nation’s capital. The action, which resulted in 21 arrests, drew attention because 1) it was seen as a demonstration of the Trump administration’s get-tough policy on illegal immigrants and 2) the outcome was not that great considering the cost involved in the effort.

New reporting from Bloomberg, however, suggests that maybe there was more to the story than was initially made public. Did 7-Eleven tip off  ICE about illegal immigrants working at stores run by franchisees who were critical of the convenience store and its CEO Joe DePinto? Has this tactic become part of a bag of dirty tricks being used by 7-Eleven to stifle dissent among its franchisees?

According to Bloomberg’s reporting, tension between 7-Eleven and franchises has risen over the nearly 13 years since Mr. DePinto, a West Point graduate, has run the company. Under his leadership, 7-Eleven has become more demanding of its franchisees, requiring them to purchase more inventory, pay higher fees and comply with an increasing list of corporate requirements.

In the matter of illegal immigrants, 7-Eleven’s agreement with franchisees has specified that a franchise may be forfeited for failure to comply with all state and federal laws. While the company has denied that it had anything to do with the ICE raids in January, franchisees are doubtful, with some claiming that those targeted have had disputes with 7-Eleven.

Gurtar Sandhu, who operates four stores in Los Angeles County, was the only franchisee in the area, which includes hundreds of 7-Elevens, targeted in the ICE raids in January. Mr. Sandhu has been involved in two lawsuits against 7-Eleven in the past.

DISCUSSION QUESTIONS: Assuming Bloomberg’s reporting is accurate, has 7-Eleven has gone too far in “policing” its franchisees? How do you see the relationship between 7-Eleven and its franchisees compared to others engaged in franchised businesses?

Please practice The RetailWire Golden Rule when submitting your comments.
Braintrust
"To use selective contract enforcement as a tool for disciplining 'problem franchisees' while letting 'good' franchisees get away with the same behavior seems like a real issue"

"Given the events and publicity that surrounded the Farrukh Baig scandal in 2010 7-Eleven might have had some right to be concerned..."

"That corporate feels compelled to leverage tactics like this to push out their poor performing franchisees is quite telling about the corporate culture."

10 Comments on "Is 7-Eleven using ICE to get rid of troublesome franchisees?"

Of course, franchisees should abide by the law. However, if the reports are true, these are extremely nasty tactics by 7-Eleven. It’s not the kind of behavior I’d expect from any responsible business.

Totally wrong. However, it is a testament to how low a sizable business will go to serve its own purposes, and take revenge. I believe that fortunately, we are entering an era of increased voluntary corporate social (and moral) responsibility. I hope the trend serves as a sign for those companies that behave otherwise.

Here’s the problem. 7-Eleven has every right in the world to insist that franchisees abide by all local, state and federal laws. And, especially in this day and age, that includes making sure franchises comply with hiring standards, i.e., don’t employ undocumented individuals. But — and this is assuming Bloomberg is correct — it seems to me that there are two better options that 7-Eleven could have selected, but allegedly did not. The first is — assuming one is O.K. with them monitoring franchisee compliance to the point that they are identifying which workers are, and aren’t, documented in the first place — being uniform in terms of enforcement, i.e., “policing” all franchisees with the same rigor. The second — again assuming one is O.K. with the first — would be to notify the franchisee of an alleged infraction and then let them either make a case for keeping the worker or terminating their employment. If a franchisee was found in frequent violation one assumes their franchising agreement could be legal voided at any point.… Read more »
2
|
0
-   Share

Given the events and publicity that surrounded the Farrukh Baig scandal in 2010 7-Eleven might have had some right to be concerned that some franchises were employing illegal immigrants or otherwise violating labor laws. This may have prodded them to be more proactive in this regard. However, if it used those efforts to target franchisees who had sued them or protested their policies it is certainly a violation of the trust element in a franchisor/franchisee relationship.

Wow. Let’s hope that 7-Eleven hasn’t decided to ruin the lives of some of its employees by resorting to tactics like this. If true, this story would dampen my enthusiasm for picking up the occasional Slurpee…

If the story is true, 7-Eleven and its CEO want to mimic other foot soldiers in countries led by demagogues. You sustain your status and advantages by calling out and jeopardizing others. Publicity about this will ultimately make all the franchisees wary

What else will the CEO/management find worthy of a deceptive tactic to control their flock of franchisees? It’s not surprising that franchisees will be looking over their shoulders which is not the best approach for forward looking strategies.

If Bloomberg and others connect the dots, I trust that 7-Eleven will change its ways and make up for its bad behavior by contributing greatly to the ACLU.

They say any publicity is good publicity, but sometimes, bad publicity really is just plain bad! This isn’t the first time we’re hearing about potentially abusive behavior by 7-Eleven corporate towards their franchisees. This is definitely not the way to develop a good business relationship.

That corporate feels compelled to leverage tactics like this to push out their poor performing franchisees is quite telling about the corporate culture and doesn’t do much for recruitment purposes. You have to wonder what is the real goal here — just to eliminate franchisees seen as troublesome or poor performers? Or is corporate deciding they simply have too many stores to allow for a consistent customer experience int he future?

Convenience stores are evolving and 7-Eleven is falling behind in many ways. I can’t see how this approach is going to help them move forward in any direction but into a downward spiral. How many consumers will hear this story and now feel they no longer want to shop there!

I have no reason to believe the report is off base. But I hope 7-Eleven has not gone that far off base. These are strong accusations.

“Assuming Bloomberg’s reporting is accurate” which seems like something we should be more sure of before commenting further; that Mr. Pinto “is a West Point grad” seems more like innuendo, than a relevant remark.

All this having been noted, however, I think it’s fair to say 7-Eleven is facing challenges.

If the report is correct, yes 7-Eleven has gone too far. At this stage it appears to be a strained relationship, and the only way to gain trust and fix the problem will be to remove Mr. DePinto from 7-Eleven.

It appears that in the eyes of the franchisees, Mr. DePinto personifies all that is wrong. Without franchise buy-in, there are no corporate mandates, and this type of disfunction will only be solved by removing the head.

The issue is not that the corporation is demanding, that’s usually more the norm than the exception, the issue is leadership style and enforcement methods.

"Given the events and publicity that surrounded the Farrukh Baig scandal in 2010 7-Eleven might have had some right to be concerned..."

"That corporate feels compelled to leverage tactics like this to push out their poor performing franchisees is quite telling about the corporate culture."