Is Amazon’s speed killing the competition? 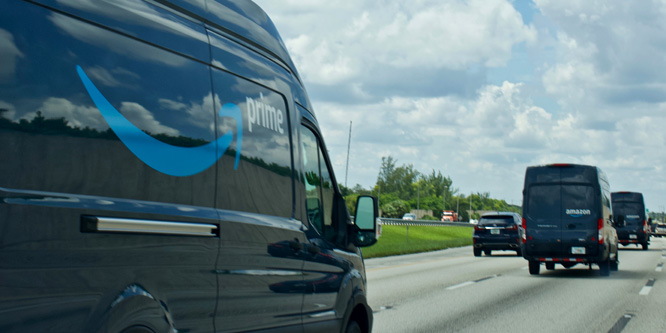 The numbers of customers using Prime’s one-day and same-day delivery more than quadrupled in the fourth quarter to help drive healthy holiday sales for Amazon.com.

“What we saw was essentially a very strong holiday performance from the middle of November on,” said Amazon’s CFO Brian Olsavsky on a conference call with analysts. “We also had a very big uptick in response to the one-day availability that’s been building through the year.”

In April, Amazon announced it was cutting its standard two-day delivery time for Prime members to a single day.

The one-day promise also supported the greatest increase in Amazon Prime members in a single quarter in the history of the program. Globally, Amazon now has over 150 million Prime members, up from 100 million last April. Member growth remains a critical metric because Prime members spend at more than twice the rate as non-members.

For analysts, a surprise was that the costs of the shift to one-day shipping were less than the $1.5 billion Amazon expected, despite the surge in activity. Mr. Olsavsky said, “We get efficiencies as we learn and grow and handle more one-day volume.”

The costs of expedited delivery had been a concern. Stifel analysts wrote in a note, “We support where Amazon’s investment dollars are focused as we believe this better positions the company for continued market share gains and opportunity for greater margin expansion once the company emerges from the current investment cycle.”

Company wide, revenues climbed 21 percent and earnings of $6.47 a share, handily topping the consensus target of $4.04. A growth uptick in Amazon Web Services (AWS), which accounted for 67 percent of Amazon’s operating profit in the period, also drove the profit beat.

Please practice The RetailWire Golden Rule when submitting your comments.
Braintrust
"The bigger question is the contradiction shown by shoppers who increasingly say that sustainability is important, considered alongside the swift uptake of one-day shopping."

"If Amazon can execute same-day and next-day delivery during the holiday season, the message is that they can certainly do it anytime."

"It is beyond environmental comprehension, the compounded climate costs of delivering millions of individual packages a day, globally."

15 Comments on "Is Amazon’s speed killing the competition?"

Walmart, arguably the #1 competitor, has also built out their one-day infrastructure. So let’s not worry, they’ll be just fine.
Smaller retailers are able to leverage third-party logistics providers that are also scaling up to provide one-day shipping. They will also be just fine.

The bigger question is the contradiction shown by shoppers who increasingly say that sustainability is important to them, when considered alongside the swift uptake of one-day shipping. I wrote about this phenomenon in a piece called “Consumers Say Sustainability Matters. So Why Are We Demanding Free One-Day Shipping?”

I wonder if its a classic case of consumers saying something is important but behaving in a different way; or if we are starting to see a bifurcation of shoppers – the younger (generally) demographic that prioritizes sustainability versus other shoppers who prize convenience and speed above all else.

Sure, speed and convenience and “free” are a significant competitive advantage. But I am reluctant to go flat out thumbs up at this point. I think all this speed and convenience is spoiling customers rotten and leading to some dangerous inefficiencies. I come to that conclusion from some very scientific research. Meaning the recapturing of a corner of my garage from the pile of cardboard boxes accumulated over several weeks of deliveries. All those boxes, all those deliveries, all those trips by Amazon and UPS trucks. Not too long ago I would have had to do about five minutes of planning and do all those errands myself. No way I would have done it in a hundred trips. I would have been much more efficient about it, just out of a selfish interest in making the best use of my time. Not sure what the answer is, but it gave me pause.

Speed kills and in this case Amazon’s speed of delivery is killing the competition. The speed of delivery may not be the only advantage of being a Prime member but it is certainly something that makes a member more likely to look to Amazon first once they use it. For many items I would much rather go to the store and see, try on, try, or touch an item than order it from Amazon and run the risk of not liking what I bought, but for known items the one-day delivery is certainly the deciding factor in my selection of Amazon for fulfillment.

With all the intense passion and fervor by presidential candidates and the media regarding the coming extinction of the world caused by human-created climate change, it is extremely interesting to observe the laissez-faire if not non-existent attitude regarding the environmental costs of Amazon executing one-day and same-day delivery services. Planes, trucks, packaging, human toil, racing delivery trucks in towns large and small. For what end? Environmentalists complain about private planes, yet one-day and same-day delivery gets a pass. It is beyond environmental comprehension, the compounded climate costs of delivering millions of individual packages a day, globally. I don’t get it. I sure would like to know.

What is the old adage – “speed kills?” While one-day and same-day delivery certainly can be a competitive edge for some customers, I believe that free returns remains a far more important competitive distinction for online shoppers. While we certainly live in a nanosecond world where we expect instant gratification – knowing you can return items (particularly shoes and apparel) for free dictates where and with whom online shoppers shop.

There is no question that speed of delivery is one of Amazon’s biggest advantages over its competitors. With its scale and hefty profits, Amazon has the ability to invest in the infrastructure to support continued compressed delivery times and most retailers can’t afford to compete at this level. It is becoming an unfair advantage for Amazon. I feel sorry for small retailers. Hopefully they can find ways to personalize their shopping experience in ways that Amazon can’t.

“If I can make it there, I’ll make it anywhere.”

If Amazon can execute same-day and next-day delivery during the holiday season, the message is that they can certainly do it anytime. Over the years, we have discussed hurdles to faster delivery that online has had to overcome. Once we found two-day delivery to be astonishing.

But as each hurdle is surpassed the expectation increases. Is the online friction of “I need it today, I must actually go to the store” now obsolete? Then ability for Amazon to execute during the holiday season now has established a new standard of service anytime during the year by which all will be measured.

I spent may years arguing that “convenience” really meant “proximity and speed.” That has changed, now it is best defined as “immediacy.” Amazon wins the game — for now.

Sure speed is important, but so is the fact that 89 percent of sales are still made in a store. It’s too early to talk about killing anything. Let’s keep focusing on the customer at all stages, and creating nimble organizations that can respond to changing realities.

Amazon has done a great job of differentiating themselves with a stellar customer experience, and their delivery options have been one of the ways they’ve done it. They set the bar higher for most, and with their large customer base have become a “standard.” And just like all organizations that raise the bar, it’s only a matter of time before others catch up. My bet is that once others do catch up, Amazon will be on to the next differentiator.

It’s the amalgamation of it all for them: selection, speed, convenience of not going anywhere, price, simplicity (kind of) … I mean, $90 billion last quarter — they’re going to pass Walmart soon.

It’s an advantage. Despite this trend towards speed, consumers have begun to understand that it affects more — such as the environment and more important, their pocketbooks. It’s still not free for the customer. Even Prime customers dish out $6 for under $35 worth of goods plus their monthly fees and non-Prime customers pay a premium of $10 for this service, always with eligible or select goods exceptions. If customers can wait a day or two, other services can deliver at lower cost. Only a subset of the market demands the immediate delivery, so the real question is, how much of an advantage?

Delivery speed is definitely a competitive advantage. There’s a new normal emerging here around fast and easy delivery. And it is becoming easier for smaller retailers to support faster delivery with 3rd party partners. But it’s not the end-all-be-all. Focusing on customer service, sustainability, loyalty or return privileges can all be alternative focus areas that make just as much of a difference for consumers.

Speed counts no question. But the entire delivery infrastructure comes with some fundamental questions. If Amazon can get my package to me later today or tomorrow, why can’t they use the same facility and save time and energy by picking up my returns (and recycle) the packaging? I don’t think this is a forever advantage — as others have pointed out … Walmart is there, and 3 PLs can get smaller retailers close enough.

Braintrust
"The bigger question is the contradiction shown by shoppers who increasingly say that sustainability is important, considered alongside the swift uptake of one-day shopping."

"If Amazon can execute same-day and next-day delivery during the holiday season, the message is that they can certainly do it anytime."

"It is beyond environmental comprehension, the compounded climate costs of delivering millions of individual packages a day, globally."