Is now the perfect time for grocers to sell imperfect food? 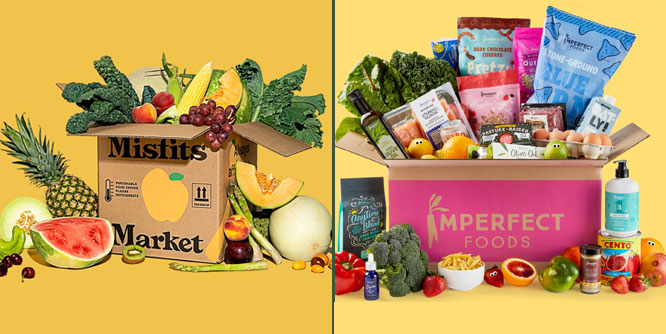 With inflation and a potentially looming recession at the forefront of the U.S. consumer’s mind, many are reining in spending and looking for ways to bring down their grocery bills. At the same time, people are more accustomed than ever to buying groceries online despite the added expense. This confluence of circumstances could be a boon for a couple of grocery delivery startups selling the kind of produce that often gets tossed out unnecessarily.

Misfits Market and Imperfect Foods are services that focus on selling and delivering surplus produce, direct-from-supplier produce or “ugly” organic produce — the type of fruits and vegetables that are high quality but often end up as food waste because of superficial imperfections, according to Healthline.

Both companies offer pantry items as well, and Imperfect Foods offers a line of snacks made from ingredients that would have been otherwise thrown away by suppliers. Misfits Market promises that members, who can join for free, will pay up to 40 percent less for groceries. Both tout reducing food waste as a prime goal of the service.

Even before the recent bout of inflation and increased price consciousness, grocers were trying to find something to do with ugly produce.

Walmart attempted a similar in-store test of its own. By 2019, however, both Whole Foods and Walmart had quietly ended their pilots of ugly produce, according to The Globe And Mail. Price Chopper, another grocer that attempted and abandoned such a pilot, cited low customer interest.

Ugly produce startups are not the only discounters offering grocery delivery.

Instacart has been trying to address consumer cost-consciousness on its own as well. Last year it added a deals section to its app specifically intended to make purchasing groceries via app more affordable.

DISCUSSION QUESTIONS: Do you think economic conditions will push people who still want grocery delivery in the direction of services like Misfit Market and Imperfect Foods? Do you see mainstream grocers following suit and adding “ugly” produce to their product mix?

Please practice The RetailWire Golden Rule when submitting your comments.
Braintrust
"Consumers’ pocketbooks are ready for this aesthetic change."

"Consumers only worry about imperfect produce because they’ve been trained to look for perfection as a competitive differentiator."

"Market it boldly and creatively. Give it its own section. Make the “imperfect” beautiful. It’s what inside that counts isn’t it?"

17 Comments on "Is now the perfect time for grocers to sell imperfect food?"

This is a personal opinion — I’m not sure how well “ugly” produce will sell. The first thing I thought of was that people probably won’t buy a bruised banana, but they would probably buy a dented can of soup. That said, in tough times it’s hard to predict certain consumer behaviors.

I was a Misfit Market customer for a while and backed off after several deliveries that didn’t work out. The irregular produce wasn’t a problem at all, yet inconsistencies with quantity and quality were. Since then, I’ve seen that they’ve changed the model to steer customers into non-fresh grocery items. I like the concept and feel bad for these companies. It’s difficult to make sustainability claims when padded packaging, cold packs, and shipping are part of the deal and I’ve seen in forums that they get a lot of flack for it. It’s also hard to ensure quality overall. Grocers would have an easier time executing ugly produce plans if only because shipping and sight-unseen variables would be mitigated.

Grocery stores should jump on this! Since many people shop today for tonight’s meal, that’s the drawback to a subscription service. If you don’t know what’s in the box, it’s hard to plan tonight’s meal. Consumers’ pocketbooks are ready for this aesthetic change.

It is just such a statement on the state of the world when entirely edible, nutritious and delicious “imperfect” foods are rejected by our wealthy society while people all around the world go hungry. The good news is, this isn’t a product problem, this is a perception problem. And savvy marketers make their living creating (or recreating) perceptions. Clever positioning, pricing and promotions should be able to increase the appeal and marketability of so-called imperfect foods and help build the category. The timing is right, as inflation pressures are forcing consumers to consider alternative options. We just have not yet hit on the right marketing strategy – and it clearly isn’t easy if even the marketing brains behind Whole Foods and Walmart didn’t get it right. The good news is that it’s a great time to invest in this legitimate and attainable opportunity to build a meaningful category that turns waste into profits.

Could not be said better Dave! The problem is imperfect marketing not imperfect produce.

The fact that the produce is referred to as ugly is indicative of the barrier there is to selling these items. “Eye appeal is buy appeal” is a mantra that all retailers have ingrained in their being. Customers have long been used to having produce trimmed, displayed, and packaged to increase its visual appeal.

The tests by Walmart and Whole Foods occurred in a different economic climate but, while I expect the result might be better today, I don’t foresee them being a large success — in the stores or delivered to the door.

Consumers are looking for the best bang for their buck in these times – if the quality delivers, despite being “ugly”, they’ll be more open to buying it as long as ugly doesn’t mean lesser quality.

I think the broader challenge, per Dave Bruno’s comment on perception, is that right now, these are separate services that require consumers to go out of their way and add another option. We need to see ugly food tables at traditional grocery stores to overcome perception and awareness problems.

The idea sounds great. A few imperfections to save money. However there is a fine line between “imperfect” and “not usable”. For grocers to make this work they would have to have some really well trained store team members who can make that determination. For the delivery services, there are issues with inventory availability. I believe that issue will force this to be a niche business for the foreseeable future.

I was a customer of Imperfect Produce for a long time, until I realized that I always ordered more than we could eat. The produce wasn’t ugly and it wasn’t necessarily imperfect, it looked a lot like what you find at a farmer’s market. Most shoppers wouldn’t even look at it sideways.

I don’t think economic times will push customers to move from where they currently order groceries to Misfit Market or Imperfect Produce, but I do think adding “ugly” produce to a grocery store’s merchandise mix is a good idea that I think eco-conscious shoppers will appreciate.

I think this is a great time to be selling imperfect foods. They’re a “perfect” alternative for consumers who want to save money and still stay sustainable. When I worked in grocery many years ago I remember the head produce buyer asking me if I knew how he determined which tomatoes to buy for the chain. He then took a tomato off his desk and threw it down on the desk and said “by how high they bounce.” This is also why most apples look photogenic but taste like nothing at all. It’s also why I’m now planning on ordering some slightly imperfect chocolate-covered snacks right now.

Let’s be honest — when it comes to nature’s produce, what we declare “imperfect” is nothing more than a mindset, a judgement with no basis, influenced by marketing. If I could get an oddly shaped avocado or mango less expensively, I’d jump at it. Dave Bruno’s comments on perception are fully on point. And heck, aren’t we all “imperfect” in some way?

Broken boxes etc. are a totally different category. Might parts be missing? Was this a returned product for some reason? At least there is some basis for that judgment.

My suggestion is that grocery stores make uniquely shaped produce a feature. Show it some love. Market it boldly and creatively. Give it its own section. Make the “imperfect” beautiful. It’s what inside that counts isn’t it?

There’s a huge need for waste reduction in grocery (and other categories).

The ugly/imperfect foods model seems to have potential, but I’m equally intrigued by the “upcycling” trend that converts food that’s traditionally wasted into more palatable products.

Consumers only worry about imperfect produce because they’ve been trained to look for perfection as a competitive differentiator. We have brand marketers to thank for that! Likewise, it’s more a marketing problem to solve than a product problem to convince consumers it’s OK to buy such produce. You can look no further than your neighborhood farmers market for examples of this that work. At my local farmers market there are many vendors offering those imperfectly shaped fruits and vegetables and no shortage of consumers buying them up. Grocers should take a serious look at this and think hard about how they will market these items. It can be done, and there is surely a market for it in the midst of rising food prices.

Depending on the customer persona, the answer is yes in that those who have respect for what is grown and brought to our table should not go to waste, and can truly save on their fruit and veggie expense — sure thing. It is a service that definitely has a place in our supply chain, regardless of economic conditions.

Supermarkets are afraid of being sued. I asked my local Stop & Shop produce manager once about getting access to their produce they were going to throw away (I wanted it for my backyard chickens) and he refused saying they couldn’t. The fear was if someone got sick from eating food that was expired it would open them up to liability. In today’s litigious world, it’s not an unreasonable fear.

Selling ugly fruits and veggies in supermarkets is not something new. For years, some grocers in Europe have had success selling these imperfect produce items — as have some US grocers who know their shoppers.

Nowadays, inflation is prompting consumers to shop differently — buying less popular name brands, buying private label goods, and so on. It makes sense that sales of ugly produce would attract some shoppers. Sales would increase as economic conditions decrease. It’s a simple as that.

Selling ugly produce could be a winner for more price oriented grocery formats, as it gives relief to customers looking for savings. The other formats who should do well with this are natural stores, which openly state their larger brand commitments to environmental sustainability.

For grocers driven by quality and variety, the challenge will be the confusing brand promises already made on higher grading, sweetness/brix levels and taste expectations with an alternate “bin” of ugly produce, at a lower price. Ultimately, they’d need to decide carefully if training customers to look for lower priced, lower quality produce in store is in their best interest.

Braintrust
"Consumers’ pocketbooks are ready for this aesthetic change."

"Consumers only worry about imperfect produce because they’ve been trained to look for perfection as a competitive differentiator."

"Market it boldly and creatively. Give it its own section. Make the “imperfect” beautiful. It’s what inside that counts isn’t it?"