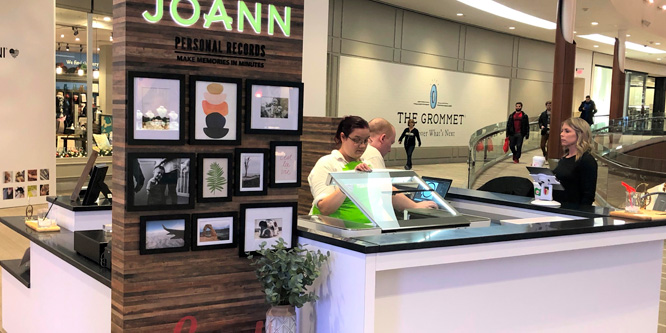 Joann, the craft and fabric specialty retailer, is investing in a startup that enables customers to experiment with 3D laser cutting and engraving on their DIY projects in-store.

In April, the Seattle-based startup, Glowforge, broke crowdfunding records, selling $27.9 million of pre-orders in 30 days in launching its line of 3D laser printers. Unlike 3D printers that use additive technology to build objects out of plastic, Glowforge uses subtractive technology to cut and engrave products from materials like wood, leather, acrylic, paper, fabric and even chocolate. Its starter price-tag is $2,500.

With the investment, Glowforge becomes Joann’s brick-and-mortar national retail partner. The technology will roll out to select stores in coming months and be made available for custom online orders. Joann doesn’t sell 3D printers.

The technology is already available at Joann’s first in-mall kiosk that just opened at Natick Mall outside of Boston as well as its recently opened Concept Store prototype in Columbus, OH that includes other rentable technologies and machines.

With Glowforge, users can start with a hand-drawn image and use software like Photoshop or clip art to 3D print a file using a cloud-based app. Users preview the results, and drag the images around on their chosen material to position them exactly as they prefer.

In a statement, Stephen Caution, VP of business development at Joann, said the partnership will give customers the first shot at experimenting with the new technologies. Applications range from custom acrylic floor lamps to leather shoulder bags.

“Joann has become much more than a place where people buy things, and we know crafters want more options like this,” said Mr. Caution. “We’re not only looking at our stores as places to sell crafts and fabrics, but also as destinations customers can come for advice, inspiration, education and sharing.”

Lowe’s and Staples have offered in-store 3D scanning and printing and Home Depot has demoed them — all three also sell 3D printers. Long hyped, 3D printers’ path to retail has been challenged by high prices, but the technology has become widely used for product prototyping and is popular with hobbyists.

DISCUSSION QUESTIONS: How much will Joann gain for bringing 3D laser cutting and engraving services to its locations, and how important was it to invest in Glowforge? Are alliances and in-store services the way 3D-printing finds its way to retail?

"Adding DIY 3D laser cutting and engraving is a bonus that crafters, makers, DIYers — whatever we are calling them this week — will love."

"I have been impressed with the innovations at Joann over the past few years — they stand out, especially compared to less innovative craft retailers..."

Unique experience — truly unique. Differentiation. Competitive advantage. Explore + Experiment = Experience. Joann’s customer is going to LOVE this! They will be making up new projects just to experiment with this. And so are all the customers they will now steal from the market. What a coup!

This is probably a calculated risk. Customers are more involved in the experience. The resulting precut is probably very accurately cut making the whole concept a potential success. We find more retailers investing in technology companies, not just technology. This is a fairly recent trend with important future implications for entrepreneurial technologists.

This is an interesting way of integrating new technology, offering a unique experience, exposing consumers to new technology, and increasing in-store traffic for Joann. For Glowforge the partnership provides more exposure for their technology. Great idea.

Brilliant. The retailer does not need to be the hardware or technology engineer. These types of hardware technologies have little utility to the consumer without the benefit of the physical retail environment to support and educate her. As 3D printing becomes more democratized, Joann reaps the benefits of investing early.

Provided you pick a winner, investing in a technology company as opposed to investing in a technology is a smart play for retailers, since it should — at least in theory — keep you current rather than marrying your offerings to dated systems and products. That said, picking a winner isn’t all that easy. So assuming Glowforge is winner — and I’m not making that assumption — the alliance should be good for Joann Fabrics. As to the second question, the answer is a partial yes. As the cost of 3D printing systems — additive and subtractive — continues to decline they become more practical for retailers to experiment with. But … and it’s a big but … that price decline also makes them more attractive to consumers who can suddenly do in their workshop what they previously had to do at Joann, so the advantage of having the technology in-store is temporary unless retailers can figure out a way to add additional value around the technology — making expert advice available, providing access to… Read more »
1
|
0
-   Share

As a long time part of the creative industries, I can tell you that this is a big deal. Craft retailers currently offer the use of die cut machines and Cricut, Silhouette and other hands-on machines for a fee or free use with purchase. Adding DIY 3D laser cutting and engraving is a bonus that crafters, makers, DIYers — whatever we are calling them this week — will love.

This is a smart idea that provides a service of value. It gives crafting consumers a reason to visit Joann over rival stores. I have been impressed with the innovations at Joann over the past few years — they stand out, especially compared to less innovative craft retailers like Michaels.

Joann is totally setting the standard for what a craft retailer can be. Hope these services and close-to-home innovation happening near their HQ can effectively roll out to all their locations, selfishly including the humdrum locations I shop at here in NC.

3D laser cutting and engraving services are a great addition to Joann. Crafters, many who are Joann customers, will appreciate the ability to further customize and personalize their projects with innovative cutting and engraving services. It will spark new ideas for crafters and may encourage them to visit Joann stores more frequently and spend more on materials. This is a great strategy for Joann to personalize the customer experience and differentiate from its competitors.

While Joann may not have had to invest in this startup, the investment may provide them greater influence over product development to design the machines to meet Joann’s specific needs.

I believe there is a future with 3D printing in retail. Custom clothing, made to measure and accessories are all in play as the technology matures. It is already making inroads in aerospace and the auto industry. Is retail next?

Kind of hard not to applaud a retailer getting better at what they do (and by “better” I’ll be inclusive and put “offer more services” under that heading).

My only concerns would be in execution — e.g. a slow-rollout thwarting raised expectations — but too early to worry about that.

Please, let’s get our terminology and our technologies straight. While 3D laser cutting and engraving does exist, what Glowforge sells is a 2D laser device (or, more appropriately, a 2.5D device). Joann’s is not offering 3D printing at this time. It remains to be seen whether this move will have any significant impact. Catch 22 — if this takes off, they’ll quickly discover that the Glowforge isn’t up to the demands of heavy commercial use.

"Adding DIY 3D laser cutting and engraving is a bonus that crafters, makers, DIYers — whatever we are calling them this week — will love."

"I have been impressed with the innovations at Joann over the past few years — they stand out, especially compared to less innovative craft retailers..."