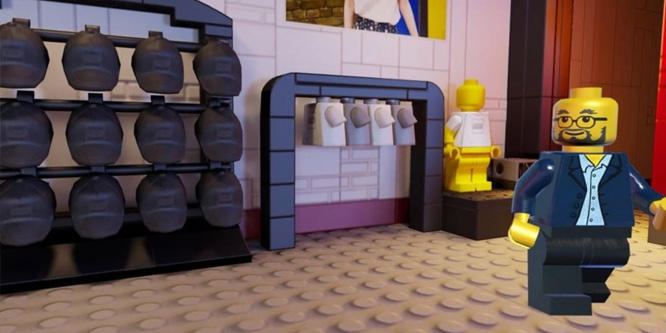 On February 13, for London Fashion Week, Lego opened a “virtually” empty pop-up store for one day to sell a limited-edition apparel range that could only be bought through Snapchat.

The only thing in “The Missing Piece” pop-up in London’s Soho district was a Snapcode, a QR code for Snapchat, displayed on a plinth. Scanning the Snapcode transported the shopper via their smartphone screens into an augmented-reality (AR) fashion boutique.

Visitors were then able to explore the AR space that featured a DJ booth, arcade machines and bouncer, all made of Legos. Lego mannequins showcased the streetwear range that could be bought online through an integrated “Shop Now” feature on Snapchat.

The AR Lens is available to Snapchat users in the U.S. and Europe online, and the overall campaign is designed to drive traffic to the wider range available from the Lego Wear e-commerce site.

Will Scougal, director EMEA creative strategy at Snap, said in a statement, “Snapchatters engage with AR naturally, on average 70 percent of them play with an AR lens every day. So, with the addition of e-commerce — to an exciting experience like this one — we’re able to drive sales, too.”

The DJ and #LEGOMinifigures staff in our #augmentedreality shop are also ready to welcome you today 🎵 . Use the link in bio to get to the #Snapchat shop 👍 . #LEGOWear #LEGOWearDrop #firstever #adultcollection #limitedcollection #exclusivecollection #AdultFanOfLEGO #afol #afols #limitededition #streetwear #LEGOaddict Everyone with a Snapchat account can enter the shop, but we only deliver to France, UK & Germany.

The Lego campaign moves AR commerce a step ahead. Several AR tools enable consumers to try-on glasses, make-up and other items before purchase.

At the store level, AR has been largely used as a novelty tactic for branding purposes. This past weekend in Charlotte for the NBA All Star Game, for instance, Nike partnered with Snapchat to let NBA fans create their own AR filters.

Writing for Women’s Wear Daily, Adriana Lee noted that AR pop-ups pack some of the advantages of online selling, such as avoiding the need for inventory or displays, as well as similar downsides, e.g., not being able to feel the fabric.

“Still, it’s an intriguing exercise, even if it works better for branding than actual transactions,” Ms. Lee  wrote. “Lego and Snapchat will have a clearer picture once the final traffic or sales numbers roll in. If either are good, then this probably won’t be the last time shoppers see a clothes-less clothing store.”

DISCUSSION QUESTIONS: What do you think of the potential to bring virtual shops via AR to physical spaces, whether through pop-ups or permanent stores? Do you see such shopper experiences working more as a branding or commerce tool?

Please practice The RetailWire Golden Rule when submitting your comments.
Braintrust
" I see AR use cases as very real for things like store planogramming, dynamic product information and branding before commerce. "

"Virtual stores are not a complete novelty, but they drive branding and interaction far more than actual transactions."

"I am sure there are many similar uses for AR but long term strategy is still a ways out IMHO and for my 2 cents."

9 Comments on "Lego brings AR to an empty store"

There’s definitely potential in this idea, but any practical uses are still a ways off. AR is just not widespread, and consumers still view it as a gimmick. So it works better as a branding tool for now and not as a commerce tool, but hopefully some new innovations come soon that can change that.

Yes, this is a fun addition for Fashion Week. People are there to be excited and this is another way to create a wow moment. I am sure there are many similar uses for AR but long term strategy is still a ways out IMHO and for my 2 cents.

This concept is a novel idea and will create short-term curiosity, but I don’t see this concept as a long-term success. Customers are busy people who will take time out when they’re curious once but, unless it’s a must-have, they’ll most likely only do it once. Stores need atmosphere; they need attractive and appealing merchandise and most of all they need humans that interact with customers. We can keep tweaking and experimenting but, in the end, these essential needs will not change. Add technology, especially technology that is fun and exciting, and you will have a real winner, but offer only technology with the complete onus on the customer and you will find you have a novelty that will come and go quickly as most fads do.

What a world we live in. This is all very cool but I think the technology has to advance further before the commerce angle can play any significant role for AR. I certainly wouldn’t buy one of the items on the Lego “store” based on what I saw. I see AR use cases as very real for things like store planogramming, dynamic product information and branding before commerce. If the 70 percent figure is true, however, certainly AR is growing towards mass adoption with the next generation and use cases will continue to grow

Virtual stores are not a complete novelty, but they drive branding and interaction far more than actual transactions. This may slowly change over time — but LEGO is a master at branding. What this does do is engage mobile tech more than before while encouraging the subset of customers that are using apps like Snapchat to become engaged in the process. For LEGO, the branding is evident in the concurrent releases of their Lego 2 movie and the enormous amount of merchandising and entertainment.

AR and VR has tremendous potential to change the definition of a store. Tying the AR application to a commerce site is a smart strategy to enable the transaction without leaving the application.

AR, VR, and voice commerce is still at its infancy and our world is becoming virtual. As consumers get more accustomed to using these technologies and retailers develop practical uses for the apps, this will evolve rapidly.

Let’s be honest. First and foremost this is a brand play, not a commerce play. The target audience for LEGO are kids, so I think there are two areas they are focusing. First, adapt to how kids engage with technology. Second, extend the length of relevance to kids (i.e. — be cool for them longer).

Julia Goldin, CMO at The LEGO Group said, “One of the big questions that I’m always asked is the question of digitalization — is that a threat to LEGO (or) is that an opportunity. We believe digitalization is a massive opportunity … Technology has been part of integration into Lego experience for a long time now.”

All I know is that no matter how old I get, I rarely turn down the chance to play with LEGOS … even if I prefer them as the real, tangible building blocks that I know and love.

A word in the article that describes this strategy: novelty. Today, AR is very new and different experience for most consumers. So, capitalize on it until it becomes normal. Then find something else that’s novel and different.

Awesome idea! Makes the possibility of a pop-up store much more flexible — a pop-up store that can pop-up much quicker than a fully physical store. Given the audience of LEGO, it makes an excellent proving ground for the technology and the very concept.

Braintrust
" I see AR use cases as very real for things like store planogramming, dynamic product information and branding before commerce. "

"Virtual stores are not a complete novelty, but they drive branding and interaction far more than actual transactions."

"I am sure there are many similar uses for AR but long term strategy is still a ways out IMHO and for my 2 cents."