Macy’s plans for a very digital Christmas with seasonal hires 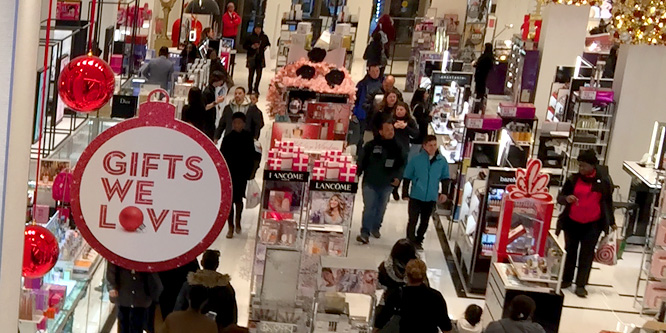 Another holiday shopping season is on the way, and Macy’s is among the retailers announcing news about the temporary talent they’re bringing on for 2018. The apparel chain is making a big investment again this year, this time pointing more resources at its e-commerce fulfillment.

Macy’s plans to hire 80,000 temporary employees for the season, according to Reuters. While that’s the same number overall that the chain began the season with in 2017, it will be deploying 5,500 more of those employees at online fulfilment centers than it did last year.

So far, 2018 has been a year of reinvention for Macy’s as it has begun to rebound from a long stint of low sales alongside an overall downturn in the department store segment. In March of this year, the chain’s CEO, Jeff Gennette, announced the introduction of such enhancements as mobile scan, pay and go to improve the in-store checkout experience, and the redesign of macys.com and the retailer’s mobile experience. At that time, he cited capitalizing on momentum from last year’s holiday season as important for the chain’s rebound.

Increasing the size of its seasonal workforce focused on digital seems to make sense for Macy’s in light of its strong pre-holiday online performance. Sales via mobile app increased more than 50 percent for Macy’s year-over-year, and its online business grew in the double digits over the second quarter, Bloomberg reported.

But the holiday hiring landscape could be different this year. A strong economy and low rate of unemployment could cut into the amount of temporary talent Macy’s is able to bring on. The situation might demand a more significant commitment from the retailer in terms of pay or longer-term opportunities.

Despite a few quarters of good news from Macy’s, Wall Street hasn’t been entirely rosy in its view of the retailer. The company reported a second quarter stock drop in August despite posting positive comps and increasing its yearly fiscal outlook.

DISCUSSION QUESTIONS: Is Macy’s right to focus on digital with its seasonal hires, or might the holiday store experience suffer due as a result? Will economic trends impact the willingness of temporary/seasonal employees to work at Macy’s?

"I do have concerns about the tight labor market and I think retailers are going to have to pull out all the stops ... offering incentives to meet their staffing needs."

"Hiring additional staff for the holidays is a smart move for Macy’s, as this is a great opportunity to “Wow” customers with great service."

This move by Macy’s makes complete sense. Their online business is growing and they dare not disappoint at the execution level for holiday e-commerce orders. The traffic surge creates the opportunity to make new friends and converts. Doesn’t have to be fancy. Just execute.

I would caution Macy’s not to put all their eggs in one basket. It’s important to have the necessary fulfillment staff, but it is equally important to have the needed in-store associates. Christmas shopping is most retailers’ key event of the year. Miss the projected numbers and the following year is gloom and doom. So with a booming economy, and store and mall traffic showing signs of increasing, Macy’s would be best served to make sure they staff their stores to handle the customers’ needs. This includes keeping the lines at the registers down because again not everyone is ready to use mobile scan, pay and go. What Macy’s needs to do is to listen to their customers. That means making sure they offer appealing merchandise both in-store and online, competitive prices and, most importantly, shopping conveniences which include having enough in-store associates. Emphasis only on their fulfillment staff will not accomplish those needs.

This is the right call for Macy’s. Digital is a key part of most shoppers’ paths to purchase today, either wholly digital or a multi-channel approach. That trend should only continue, and history shows that the traditional department store model has struggled. So why not evolve with the times?

Macy’s hiring seems about right to me. There will be a focus on the shop floor, but digital and growth is huge and ensuring that fulfillment and logistics operations are properly resourced is vital.

I do have concerns about the tight labor market and I think retailers are going to have to pull out all the stops in terms of offering incentives to meet their staffing needs over the holidays.

Clearly, Macy’s expects significant increases in digital shopping from their customers and so they have to adapt their seasonal labor to accommodate this. That said, they shouldn’t assume stores won’t be a focal point for shoppers this holiday season and need to be sure they have properly trained associates in stores for this outcome. Unfortunately, Macy’s has a reputation for not having well-staffed stores and that’s not going to help them in the holiday season. They, like other retailers, will need to fight for new hires in what may be a tighter labor market. They can’t afford to scrimp on training either! Overall, it sounds like they have the right idea so long as they are sufficiently cautious — I’m cheering for them to have a great holiday season!

As long as the market continues to reward comparative store performance these efforts on “digital” while important, won’t have the same impact that highly prepared and trained in-store associates can have during the most critical time of the year.

Good Luck Macy’s. No matter what area they focus the new hires on. The question is, where are they going to find them not only for the retail floor but, more importantly, for the distribution centers?

Look who they are competing with for those positions. UPS, Amazon and FedEx, All of them willing to pay more than retailers are used to or willing to pay. What is going to be their unique employment proposition to attract those workers?

Macy’s has a solid opportunity to reinvent itself. I am a fan. Yet in-store, there is no one around to help or ask a question of — and if you do find someone usually they are a new hire with limited knowledge. I get it that Macy’s is counting on mobile and online shopping to hit it out of the park, “flawlessly” shipping orders to happy customers. But without in-store “talent” the holiday magic of Macy’s becomes PR soundbites, training shoppers to avoid shopping in-store.

The Macy’s in-store customer experience is an overwhelming product search followed by an underwhelming ability to physically purchase the product. Possibly the strategy behind mobile scan and go purchasing? It’s a challenge for sure, in a strong economy, to hire thousands of people able to represent the Macy’s brand.

Hiring additional staff for the holidays is a smart move for Macy’s, as this is a great opportunity to “Wow” customers with great service. The holidays have notoriously been a time of poor customer service at many brands and if you can stand out by providing an outstanding experience, you will generate a lot of good will with customers. And with the continued increase in BOPIS, it puts a lot of stress on store associates’ time. More staff will help with BOPIS execution as well.

There is no doubt that finding the right people to fill the positions will be difficult. It will probably require higher pay and promises of longer term employment past the holidays.

"I do have concerns about the tight labor market and I think retailers are going to have to pull out all the stops ... offering incentives to meet their staffing needs."

"Hiring additional staff for the holidays is a smart move for Macy’s, as this is a great opportunity to “Wow” customers with great service."