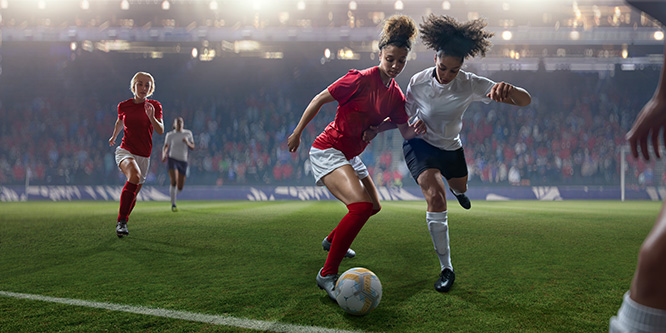 Sprouts Farmers Market has announced a major sponsorship in women’s athletics through partnerships with the Big 12 and Pac-12 Conferences timed to the 50th anniversary of Title IX.

The partnership includes becoming the first-ever presenting partner of the Pac-12 Women’s Gymnastics Championships and the title sponsor of the Big 12 Women’s Soccer Championship.

Title IX, signed into law by Richard Nixon in 1972, prohibits sex-based discrimination in any school or any other education program that receives funding from the federal government.

As a result, females now account for 43 percent of sports participants at the high school level and 44 percent of all NCAA athletes. The side benefit of playing sports is building confidence and learning leadership and teamwork skills that elevate career advancement and offer other lifetime benefits.

In recent years, sponsorships of women’s sports have seen an uptick due to empowerment movements, including the U.S. women’s soccer team’s push for equal pay.

Men’s sports, however, still earn the wide majority of sponsorship and overall sports advertising spend (outside of tennis and the Olympics). This is primarily because men’s sports draw significantly higher viewers.

Women’s slow growth in viewership, attendance and sponsorships is often traced to the notion that men — being larger, stronger and faster — provide a more entertaining product.

Proponents of women’s sports marketing claim a lack of media exposure stunts growth as studies show less than five percent of sports media content is dedicated to women’s sports. University researchers from Australia in a 2017 study attributed the skimpy coverage to male-dominated sports newsrooms, ingrained assumptions about readership and the systematic, repetitive nature of sports news.

Nielsen research from 2018 found 84 percent of global sports fans are interested in women’s sports. Fifty-one percent of those were male.

A recent Nielsen analysis found women’s sports media coverage still significantly lags behind men’s. The research firm wrote in a blog entry, “Fans around the world are telling leagues and sponsors they’re ready for more when it comes to women’s sports.”

Please practice The RetailWire Golden Rule when submitting your comments.
Braintrust
"Fifty percent of the population is women, 44 percent of collegiate athletes are women. It seems those that do not take advantage of the numbers are missing something big."

"Women represent the majority of the population in the US so it makes no sense to ignore their sporting events."

"Some BrainTrusters may remember a time when you couldn’t pay Americans to watch soccer played by men, women, or Martians."

I actually like the basketball played by the WNBA better than in the men’s NBA. And who is not inclined to watch the women’s USA soccer rather than the men?

The top athletes in the world actually earn more money “off the field” than on. My question always is, are they worth it? My answer is always “no way.”

Fifty percent of the population is women, 44 percent of collegiate athletes are women. It seems those that do not take advantage of the numbers are missing something big. They should dip their toe in the participation. It won’t be expensive and the payoff may be a lot greater than paying LeBron James $80 million annually in off-the-court earnings.

First, I’d like to take issue with the, ” … notion that men — being larger, stronger and faster — provide a more entertaining product.” Where would you put your money on U.S. Men’s or Women’s Soccer? Who doesn’t like watching Serena Williams play tennis? Now, back to the issue. Viewership is a bit like a snake swallowing its tail — increasing the sponsorship boosts media coverage, boosting media coverage creates new fans, creating new fans encourages more sponsorship — well — you get the idea. Some BrainTrusters may remember a time when you couldn’t pay Americans to watch soccer played by men, women, or Martians. And what about sports like bowling that used to have huge viewership but have all but disappeared from the mediascape? So if over half the population are women, and a high percentage of the male population prefers the nuances and/or skills of women’s teams, why is this even a question? Let’s face it, is the whole notion of “Men’s” and “Women’s” sports a little too 19th century? I mean… Read more »
5
|
0
-   Share

WOW! You are really old if you remember bowling. But at least your mind is young and modern, “the whole notion of ‘Men’s’ and ‘Women’s’ sports a little too 19th century.”

Guilty as charged. Of course I’m in Detroit where televised bowling was a huge thing.

Promoting women’s sports by investing in sponsorships is the right thing to do. The ROI will take longer to realize as there have to be some shifts in how people perceive female athletes. The key is exposure. Sponsorships fund that exposure. Given the participation rate of girls in sports today, I am optimistic that we will see growth in viewership and that the ROI for those companies investing in Women’s sports will grow significantly. Will it match the NFL or the NBA? No. Will it be lucrative enough for companies to invest there and provide more opportunities for women to earn a living in sports? I hope so.

I actually think the ROI will be better because those who initially sponsor women’s sports will pay a substantially lower fee than for the same men’s sport. The second highest paid female athlete only made $11 million in endorsements and sponsorships.

Gene, you’re a step ahead of me on that. I think you are right about that.

It is foolish to not to support Women’s sports, especially because females make up half of the population and the majority of purchasing decisions. Brands that make promotional investments will be rewarded by up-and-coming athletes and their families, friends and fans.

Women represent the majority of the population in the US so it makes no sense to ignore their sporting events.

I would like to see more sponsors take the lead and change this. Female athletes work as hard as male athletes; they should be celebrated and paid equally. But we’re talking about sports in America so I am not holding my breath that this will change anytime soon.

No one should expect that sponsorships for women’s sports will return value the same way as men’s sports.

Yes. Advertisers should invest in women’s sports. The challenge is, at what level?

There is finally growing excitement for viewing women’s sports yet viewership remains below viewing of men’s sports. From what I’ve seen, women’s sports are a passion for those who are engaged with them but the number engaged is smaller than men’s sports.

Given that, advertisers need to allocate their budgets responsibly – sometimes finding an opportunity to stand out by sponsoring these new sports and sports figures but always staying aware of the limitations which come from a culture which embraces them differently than men’s sports are embraced.

Braintrust
"Fifty percent of the population is women, 44 percent of collegiate athletes are women. It seems those that do not take advantage of the numbers are missing something big."

"Women represent the majority of the population in the US so it makes no sense to ignore their sporting events."

"Some BrainTrusters may remember a time when you couldn’t pay Americans to watch soccer played by men, women, or Martians."