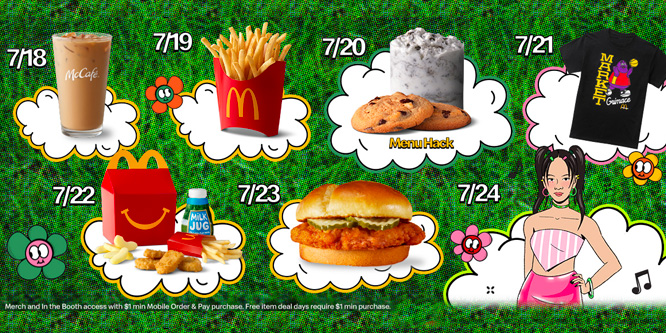 All offers — running from July 5 to July 31 — require a $1.00 purchase through the mobile app. The length of the campaign mimics the week- or month-long deals many retailers run during holiday selling.

“Mark your calendars, because McDonald’s has your pass to the event of the summer,” wrote the fast food chain in a press release that includes a 27-day calendar of deals and events.

The campaign features a Retro Grimace Pool Float while supplies last for the $1 minimal purchase on day one, while deals on many favorites, like the Chicken McNuggets ($5 for 20 on July 26), Big Macs ($2 on July 9 and July 30), and McFlurries (BOGO on July 27), are available throughout the month.

Camp McDonald’s will also play up the popularity of menu hacks, including offering a free McFlurry with an apple pie on July 6 and free cookies with any McFlurry to make a McFlurry Sandwich on July 20.

On Thursdays throughout July, Camp McDonald’s focus will be on merchandise releases, including collaborations with Free & Easy, Ma®ket, innisfree and Kid Cudi. Sundays will be dedicated to in-app performances virtually featuring artists like Kid Cudi and blackbear.

Over the last few years, McDonald’s has seen success with the introduction of limited-time meals from star musicians, including BTS, Saweetie, J Balvin and Travis Scott.

Eat this, not that! wrote, “When McDonald’s introduced the Famous Orders platform two years ago, transforming celebrity-preferred meals into menu promotions, the concept boosted sales significantly. The chain appears to be leaning into a similar strategy at a time when sales are traditionally quieter.”

Camp McDonald’s lasts longer than other events retailers run during holiday selling designed to draw traffic during the slow summer months, such as Amazon Prime Day.

DISCUSSION QUESTIONS: Do you see a month-long campaign such as Camp McDonald’s working for other food establishments and retailers trying to overcome summer traffic doldrums? Do you think the menu hacks, limited-edition merch and in-app musical performances will add enough buzz and relevancy?

Please practice The RetailWire Golden Rule when submitting your comments.
Braintrust
"This is a pretty cool idea. Definitely will drive up sales."

You know what Camp McDonald’s is? Twenty-seven consecutive days of my grandkids asking to go to McDonald’s. It’s fun and catchy and just enough time to keep people interested while creating new habits and favorite restaurants. This is a smart move to breathe new life into old favorites.

A good replacement for the long-running Monopoly game promotion – still encouraging frequent visits and highlighting different parts of the menu, but reducing frustration and likely cost.

This is a pretty cool idea. Definitely will drive up sales.

I do think Camp McDonald’s is hitting lots of the right notes, and as such can sustain a month-long promotion. And I think there are indeed opportunities for other retailers to follow suit, be it in the summer or other times of year – but the key of course will be filling 30 days with smart, meaningful and engaging offers. No easy task, to be sure. Perhaps a close tie-in with a TV series that doesn’t drop all episodes at once would be an easy way to sustain interest and energy (if the TV series has some correlation to the retailer’s brand/assortment/audience, of course). I commend the marketing team at McDonald’s for what looks like an exceptionally well-designed program, without the help of a streamer’s budget!

McDonald’s has always been innovative in their marketing. This is a great idea that will create buzz and drive traffic. I especially like the hack menu. I love that they’re embracing their customers’ creativity. Makes them seem more down to earth.

Creating engaging, easy-to-use, valuable ways to engage with the brand is a recipe that can deliver growth. While a little late to the “app party,” McDonald’s is making up for the lost time.

Fun, interesting and a great way to promote the app. Why not?

The merch drops are the key. Day one is the best and will serve the purpose of creating some hype and driving NEW app downloads. Then on every Thursday after, I am sure those will be their most active days. The full month campaign wraps in enough value along the way that existing customers will experience FOMO if they don’t have the app, and they will download it so they don’t miss a freebie next time. All in all, a good way for McDonald’s to keep the momentum of their loyalty program/app and data train flowing!

McD’s is a LTO (Mc)Master! Their ability to harness the imagination and creativity of customers, employees and franchises drives excitement, visits and frequency. They’ll learn from this campaign and deliver even more successful programs in the future.

Braintrust
"This is a pretty cool idea. Definitely will drive up sales."