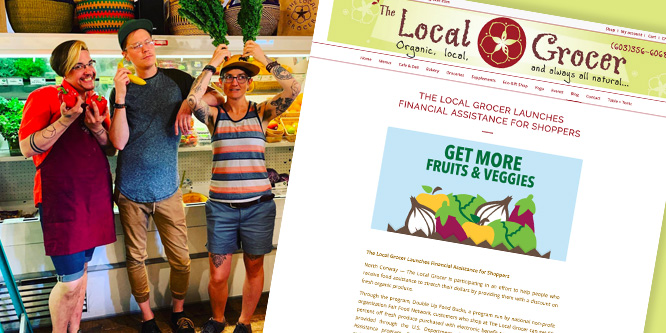 A mom-and-pop grocer in New Hampshire is making it a better deal for customers on government assistance to buy organic.

The retailer, named The Local Grocer, has partnered with national non-profit Fair Food Network on an initiative called Double Up Food Bucks, according to The Conway Daily Sun. Through the program, customers using SNAP benefits can get 50 percent off on the store’s selection of locally grown, organic produce.

While the partnership is aimed at SNAP recipients, a recent study shows that customers in general would choose organic if not for it being cost prohibitive, as reported by Consumer Reports. Organic foods are an average of 47 percent more expensive than non-organic products, though prices vary significantly by product.

Despite the high prices, interest continues to boom. The organic food market hit an all-time sales high of $47.9 billion in 2018, according to AGWeek. Fruits and vegetables account for 36.3 percent of organic food sales and 14.6 percent of all produce sold in the U.S.

Some of the biggest names in retail have also been pursuing new means of allowing SNAP recipients to shop in today’s changing retail ecosystem.

Amazon.com, for instance, began offering a discount on Amazon Prime memberships to SNAP recipients in 2017. People with valid EBT cards can sign up for a one-year membership at a rate of $5.99 a month.

Earlier this year, Walmart announced that it was accepting SNAP for online grocery order at all 2,500+ locations that allow for online pickup, giving low-income shoppers access to BOPIS, according to TechCrunch. The move comes after a successful small-scale pilot in 2017.

The question of what products SNAP benefits should be used to buy remains an ongoing point of controversy. Some argue that attempts to limit government aid recipients to healthy products is prejudicial or stigmatizing, while others promote instituting nutritional standards aimed at improving the health of lower-income customers.

DISCUSSION QUESTIONS: Should other local, or even national, grocers consider incentivizing healthier choices among people on government aid through this method? Will such moves impact how CPGs position their organic products and where they make them available?

Please practice The RetailWire Golden Rule when submitting your comments.
Braintrust
"It would be amazing if competitors matched this program — especially Whole Foods."

"Good health is good for everyone in our country. Unfortunately, those with the least, bear the burden of choice based on income rather than health."

"Of course incentives for healthier eating are a good thing. Why limit them to SNAP recipients?"

This program makes perfect sense all around. People have become more health-conscious, and eating organic foods versus non-organic is a no-brainer. All one has to do is read the news about the latest food ingredients that can cause cancer and they’re rethinking their shopping list before heading to the grocer. SNAP provides a great opportunity, and there’s no doubt that those using the program are happy to do so. Other grocers will get behind this concept because it’s an excellent way for them to make more sales while getting positive PR about the program.

Huge Kudos to The Local Grocer!

The Local Grocer is sending a message that lower-income people are not lesser than anyone else and that they deserve the same opportunities to access healthier choices as do people of higher income. Often, low-income families buy cheap (government subsidized) high carb, processed, big ag produced foods that do play havoc on their health over time. Giving an incentive to use SNAP for organic produce will hopefully create a positive impact for some people/families on their eating habits and health.

It would be amazing if competitors matched this program — especially Whole Foods.

This is about supporting the local community and understanding the demographic makeup of that community to know how best to support it as a local retailer. The Local Grocer happens to be in the town my family vacations every summer and we frequently shop there because of the quality of the organic products and because there aren’t too many grocery alternatives that offer the same products. This is a great way for the Local Grocer to support a small, local community in this region of New Hampshire – and let’s face it if given the choice, price aside, what consumer wouldn’t choose high-quality organic produce vs anything conventional? Local Grocer is simply granting additional opportunity for an expanded customer base – of which there may be a sizeable audience in the region to shop at their store for healthy choices. Kudos to a great local retailer!

Of course incentives for healthier eating are a good thing. Why limit them to SNAP recipients?

Consumers assign some value to the utility they perceive in various product benefits. Typically that is a mix of physical utility, social utility and economic means to purchase that utility. If a utility for a similar product, such as a “better for you” product, has no incremental cost people generally choose it. But if there is another trade-off (like “Cheetos still taste better than broccoli”) economic incentives don’t change behavior much.

It would be very interesting to see how much this changes actual purchase behavior — among all economic groups.

Any program or incentive that encourages healthier diet options should be seriously considered. Benefits need to accrue to the SNAP recipients through better informed purchase decisions and retailers’ investments in their communities.

This is a lovely initiative and one that is so typical of independent retailers in small towns up and down the country. It makes a real difference to families and communities and is one of the reasons good independents survive. In all honesty, however, I don’t think this will change how big grocers sell products to those on government assistance.

Good health is good for everyone in our country. Unfortunately, those with the least, bear the burden of choice based on income rather than health. Produce, especially organic has a short shelf life for the full price shopper. For those on government aid, an opportunity for grocers to share rather than toss is happening in some cities. While part of the challenge is education, more often than not grocers serving the SNAP community stock their stores with products focused on filling peoples’ stomachs as the first priority. Which leaves health in second place. Providing and incentivizing healthier choices for all is good for all Americans.

This is a great idea to encourage healthy eating and should be emulated within other programs in the U.S. Unfortunately, in our world of “supersizing” everything, the focus on healthy food choices has not always been top-of-mind. But encouraging healthy, organic, local food choices is not only good for the consumer, but also the producer and retailer. Look at the growth of Whole Foods and Trader Joe’s in the last decade, along with the growth in organic food sales – up nearly 6% in 2018 according to the Organic Trade Association – with organic fruits and vegetables now accounting for nearly 15% of all U.S. fruit and vegetable sales, this is a smart business choice and the ethical thing to do.

Braintrust
"It would be amazing if competitors matched this program — especially Whole Foods."

"Good health is good for everyone in our country. Unfortunately, those with the least, bear the burden of choice based on income rather than health."

"Of course incentives for healthier eating are a good thing. Why limit them to SNAP recipients?"