NRF: What’s the next step for omnichannel grocery? 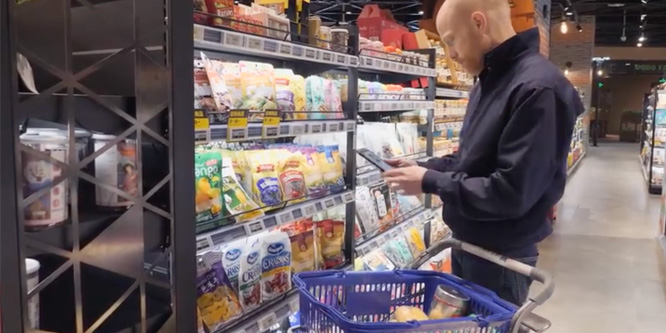 At a Sunday morning presentation at the NRF Big Show 2019, Yi Hou, VP of Alibaba and CEO of Freshippo (known as Hema in China), said omnichannel in the U.S. has too many silos dividing digital strategies. He argued that online and offline selling isn’t integrated enough for the next level of “new retail.”

The term was a reference to a statement made in 2017 by Jack Ma, executive chairman of Alibaba. In a shareholder letter, Mr. Ma wrote, “E-commerce is rapidly evolving into ‘New Retail.’ When we focus on meeting the individual needs of each customer, the boundaries between offline and online business disappear.”

Mr. Hou said this new approach is best represented in China by Freshippo, which has quickly grown to more than 100 digitally-operated stores.

Like AmazonGo, Freshippo relies heavily on the shopper’s mobile phone to connect online and offline. At the store, shoppers open their apps and scan items to see their ingredients, origin and, in some cases, ratings and reviews. With access to past purchases and browsing history, the app provides personalized suggestions as well. Supported by facial recognition, Alipay enables pay through the phone.

A big difference from AmazonGo is that each Freshippo acts like a full distribution center. Pickers roam the aisles filling online orders. Bags are carried on conveyor belts along each store’s ceiling to the packing room for final delivery. The in-store warehouse supports delivery in less than 30 minutes within a 1.9 mile radius.

Mr. Hou said that the convenience of online buying and speedy delivery leads to 60 percent of Freshippo’s revenues coming from online sales. In some stores, online is as high as 75 percent.

At a keynote session afterwards, Rodney McMullen, CEO of Kroger, which is testing some data-driven stores driven by Microsoft’s cloud platform Azure, estimated that the grocery industry is likely in the “second inning” as far as evolving e-commerce into “an experience that really makes the customers’ lives easier.”

DISCUSSION QUESTONS: Would a concept such as the Freshippo (Hema) grocery concept from Alibaba work in the U.S.? Where do you see U.S. grocery stores falling short in delivering on omnichannel expectations?

Please practice The RetailWire Golden Rule when submitting your comments.
Braintrust
"There is very little reason Amazon should be leading the way in online grocery when the retailers should have figured this out years ago. "

"Market + Food court + Warehouse + Distribution center + E-commerce hub is a lot to build into a single concept. Even its name packs it all in (fresh + ship + hippo!)."

"The concept teams appear to work in silos. The experience needs to be more than just seamless, it needs to be consistent."

9 Comments on "NRF: What’s the next step for omnichannel grocery?"

The second inning analogy for grocery by Mr. McMullen, CEO of Kroger, is most appropriate. In the first inning it was all about overlaying digital on top of existing routines in the physical store and at HQ. With pitching changes in the second inning, there are more new leaders and teams challenging long-held assumptions and ready to rethink legacy processes and ending the grafting experiment.

Think of Alibaba’s Freshippo (Hema) as Costco is to traditional supermarket — it’s about scale, quality/value, and unique assortment (treasure hunt) all wrapped up in a convenient and trusted experience.

Over the long term, the U.S. grocery industry will be just fine; but that doesn’t mean the changes ahead will be welcomed. A few leaders will make it happen and others will have to follow to stay in business. While no one can tell us how long each inning is going to be, the game is speeding up and you don’t want to miss your turn at the plate.

Not just grocery, but all of retail is separated into silos which reduces efficiency and ultimately reduces the ability to understand consumer shifts. The consumer has always had the “I have a problem and I want to solve it — Now!” attitude. This is not a future consumer. Retailers who have recognized this, have excelled.

Grocery has fallen short on the delivery to the customer, especially with perishables. There is very little reason Amazon should be leading the way in online grocery when the retailers should have figured this out years ago. But they did not take the consumer shift seriously enough and did not devote enough resources to tackling the problem. So they are behind and going to play catch up. It may be too late for many.

The challenge for all grocers is similar to what Mr. McMullen has said. 1) Being aware of the shopper’s current mission, 2) Possessing the global capability to see how to solve that mission within your organization and its ecosystem of business partners and suppliers, and 3) Having the ability to deliver that mission, wherever and whenever it requires delivery.

With all due respect to Mr. McMullen, I’d say the American supermarket industry is — to stick to his baseball metaphor — running like hell to stretch a bad bunt into a single in terms of digital thinking.

Mr. Hou’s notion of “New Retail” is much closer to what I have advocated for years — seeing the digital ecosystem through the consumer’s experience as one seamless continuum. Insisting on asserting a difference between online and offline approaches and then further asserting, as omnichannel advocates do, that there are really two digital approaches — mobile and Internet — has never made sense to me from day one. Alibaba’s New Retail approach may not be the whole answer, but it is light years ahead of how we think about the problem in the states.

As to whether a Freshippo concept could work or not in America — the devil is in the execution. As to what we could do to deliver more effectively, my vote is ban the use of the word omnichannel and start thinking like shoppers.

Love the baseball metaphors. Will offer my thoughts on the second question first. Grocery is falling short on omnichannel in places like cross-channel integration, cultural acceptance, investment resources and $ for omni, and centering on the customer. The individual customer doesn’t pull as much weight in the grocery yet, and that’s changing, but slowly. Execs, whether they know what omnichannel means or can deliver, still fail to push their teams to put a customer perspective on everything, both digital and physical. It’s like watching the outfielder throw to first base when the advance runner is rounding third. Instead of playing to stop the run, they’re playing to the guaranteed out. The game, however, is not one inning long. The Freshippo concept can possibly work, but will fall into and compete with club stores first — Costco, BJs and Sam’s Club — before affecting the rest of the grocery space. Reminds me of Service Merchandise from pre-1999 (and pre-internet) — not digital, but definitely a catalog showroom which grew to over $4B.
0
|
0
-   Share

The Alibaba concept would work in urban centers in the USA, but that is about all. It is not set up for true omnichannel fulfillment with an automotive interface, nor a fully leveraged consumer interface that creates a purchasing environment centered around the consumer. Instead, we see this coming from the Whole Foods/Amazon model that also has a distribution warehouse behind it. Much of America has a need for a customer centric interface that can also be a warehouse and omnichannel fulfillment center and we see this in the Whole Foods model, not the Alibaba model. Using what we have to correct customer needs is our greatest problem at retail.

Market + Food court + Warehouse + Distribution center + E-commerce hub is a lot to build into a single concept. Even its name packs it all in (fresh + ship + hippo!).

Freshippo tries to solve a full range of problems from home delivery to fresh food to experiential retail. I’m not sure it can be better than Costco at the “warehouse” value prop or a boutique grocery at “fresh” or Amazon at “delivery” or a mall at “food court.” And it requires a lot of real estate to fit in all of the services it promises.

Grocers can benefit by adding omnichannel services to their existing operations. And Freshippo presents features here that could be attractive to try. Costco could consider a more upscale food court. Kroger could enhance its successful app to scan products for ingredients, sourcing and consumer reviews. But the full package seems to be its own success limiter. Just because you can combine turkey, duck and chicken doesn’t mean shoppers want a Turducken.

I think the Freshippo grocery concept could absolutely work in the U.S, but it will take some time to get there. Many grocers have a huge chasm between the physical and online experiences. The concept teams appear to work in silos. The experience needs to be more than just seamless, it needs to be consistent. Grocery chains who close this gap will have huge success.

Alibaba certainly knows how to play their digital card to grab headlines. Whether they have practical suggestions which matter in the US is unlikely.

Not mentioned here is that these digital options all increase the cost of supplying groceries. Grocery is the clearest place where consumers do their OWN pick and pack portion of fulfilling. Once stores hire people to do that for customers, there should be a premium paid by the consumer.

Only by charging that premium can stores ensure that this exceptional service is used by consumers who value it. Otherwise, they will have dropped their margins another’s x% without getting customers to value what they’ve done.

Braintrust
"There is very little reason Amazon should be leading the way in online grocery when the retailers should have figured this out years ago. "

"Market + Food court + Warehouse + Distribution center + E-commerce hub is a lot to build into a single concept. Even its name packs it all in (fresh + ship + hippo!)."

"The concept teams appear to work in silos. The experience needs to be more than just seamless, it needs to be consistent."