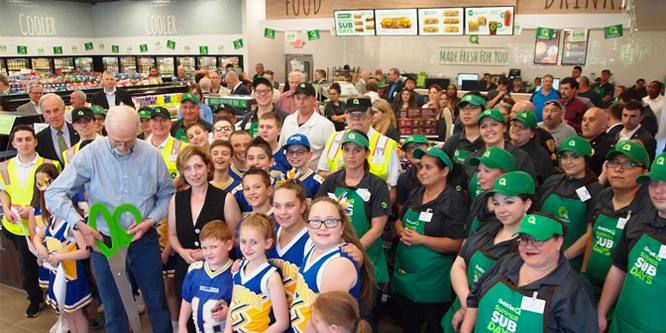 QuickChek, the Whitehouse, NJ-based convenience store chain, has begun rolling out a new concept that it claims will raise “its ability to provide fresh products and food-to-go to a whole new level.”

The chain has opened two of the concept stores in the past month, the latest in Hackensack, NJ.

“More than half the store is dedicated to food service and fresh beverages,” QuickChek CEO Dean Durling told The Record. “This store, compared to other QuickCheks, is more open. When you walk in, it’s an easier store to shop in. It’s easier to find your way to order food.”

The new concept’s store footprint is around 5,500-square-feet. The designers allowed for more space in the aisles and for standalone food displays. Grab-and-go foods and freshly baked items are featured. The stores have large standalone soup stations and new foodservice menus that focus on made-to-order sub sandwiches.

QuickChek, which is known in New Jersey for its longtime sponsorship of the largest annual ballooning and music festival in North America, has had to step up its game as competition heats up for its 150+ stores in its home state and in New York’s Hudson Valley and Long Island regions. QuickChek has begun to see the highly-respected Wawa chain make moves into parts of New Jersey where it has been the unquestioned c-store leader for years.

The convenience store chain, which was ranked among “America’s Best Employers for 2018” by Forbes, is counting on its new concept to help it differentiate no matter the competition.

DISCUSSION QUESTION: What is the difference between good and great when it comes to convenience store operators? Is QuickChek’s emphasis on fresh and prepared foods the direction that most convenience stores will be taking if they are not doing so already?

Please practice The RetailWire Golden Rule when submitting your comments.
Braintrust
"This segment is RIPE for disruption and, from my experience in this space, freshly prepared food works. "

"In the words of Picasso, “Good artists copy, great artists steal.” Dean Durling and his terrific team have learned from Picasso."

"I think more than Millennials are going to like QuickChek’s new concept store."

Historically the convenience store/petroleum industry has had a limited number of destination drivers. They included fuel, beer, cigarettes and packaged beverage. C-store companies have learned that there can be a fifth destination driver, if done right, and that is foodservice. The National Association of Convenience Stores (NACS) reported that foodservice now contributes 22.5 percent of in-store sales and 33.9 percent of gross profit dollars.

The industry’s changing emphasis has not gone unnoticed by the QSR industry which now sees c-stores as a legitimate threat to their business. This is evidenced by their focus on the thirst occasion as shown by McDonald’s coffee and fountain drink standalone promotions.

QuickChek has always been a great c-store chain but it is not alone with its attention to foodservice. Others included Wawa, Sheetz, Rutter’s, QuikTrip and many other lesser known brands. All have realized that foodservice is a key component of the industry’s future.

This segment is RIPE for disruption and, from my experience in this space, freshly prepared food works. It seems counterintuitive for certain demographics but not for others. Adding fresh foods will add additional revenue from the traditional frequent c-store visitors, as well as the “while we are here” visits. The key is the cleanliness of the overall space, the parking issues that are common to c-stores and segmenting the space into two parts for flow.

I often wonder sometimes how many CEOs actually visit their stores as a customer and not as an executive. I live in an area surrounded by QuickChek stores. Don’t get me wrong, it’s a decent C-store chain in many ways, but it strongly lacks an excellent customer experience. When ordering food at QuickChek, even though a human being is standing behind the counter, we can’t speak as the customer is forced to use a kiosk to place the order. That is convenient for those who don’t like to talk but inconvenient if you have questions, especially about the preparation of the food. Too often when I visit a QuickChek there is no one at the register, just a self-checkout, which again is excellent for some customers but not everybody. I remember the day I stopped in for a coffee refill and used my travel mug. There was no way to pay for the coffee because on my travel mug there was nothing to scan at the register. Regarding QuickChek’s newest concept: it’s okay, there are… Read more »
3
|
0
-   Share

QuickChek has always been a good c-store in the middle to northern New Jersey market. To a certain extent its competitive array to date, consisting of 7-Eleven and local bodegas, have not provided significant challenges to its market dominance.

The encroachment of Wawa and perhaps Sheetz changes the paradigm for QuickChek. Both have transitioned from traditional c-stores selling convenience grocery, snack and beverage products to a focusing on convenient meal solutions. QuickChek needs to look no further than the latest Wawa or Sheetz concept stores to see the future of the c-store business. In fact, Wawa’s current model reflects its learnings from the Florida expansion that fundamentally changed the nature of its business. The new QuickChek stores appear to mirror the Florida Wawa stores.

In the words of Picasso, “Good artists copy, great artists steal.” Dean Durling and his terrific team have learned from Picasso. Now we will see how the rest of the landscape develops.

QuickChek is known to be one of the best c-stores, especially in the tri-state area, because they’re always ahead of the curve on innovation and they have a reputation for clean, efficient stores. Every c-store chain is moving toward an emphasis on fresh and prepared food, and QuickChek is once again beating the competition to it. I think the reason is twofold — the first: consumer demand for fresh and healthier foods, especially for people on the go. Recently I was on a road trip, heading to upstate New York. We had two options, McDonald’s or QuickChek. We stopped at QuickChek. People are much more health conscious, and you can see that most reflected in the grab-and-go economy. The second? Margin. Not to be cynical, but c-stores wouldn’t be trying to meet this demand if there wasn’t some financial incentive. I think the reason is that the margin on fresh and prepared foods is much higher than other items in the store. They can cut out the middle man, get creative and add a premium… Read more »
2
|
0
-   Share

Where I live in Central New Jersey, QuickChek is aggressively competing with Wawa. Both Wawa and QuickChek stores are minutes away from my home and work, and both are usually along the way to wherever I am going. Also, I am their target customer. I visit either Wawa or QuickChek almost daily.

The differences are minimal. Therefore, the decision about where to go is based on the quality of the food and the employee interactions. The tie-breaker for me — Wawa has soft pretzels. While this may seem inconsequential to business experts, think about how many people think like I do.

Most convenience stores are more alike than they are different: cold drinks, pizza, beer, cigarettes and snacks sold in a place where you don’t tend to linger.

But a bright and open layout, fresh food, free Wi-Fi and no-fee ATMs, mobile device chargers, self-checkouts, plus a comfortable place to sit inside and out? I think more than Millennials are going to like QuickChek’s new concept store.

Fresh food service has become the number one differentiator in the convenience store industry. The leading brands have realized they can bring competition to the quick-service restaurant space. QuickChek is only the latest c-store brand to enact this level of change, following in footsteps of established brands like Wawa. Consumers have lost interest in the “old-fashioned” pre-packaged convenience foods and want to replace them with healthier and fresh options. This is a great move by QuickChek and we should expect to see them open more of these new format stores and eventually remodel existing locations to favor this new design. This trend will continue and we should see very convenience store brand move in this direction in the near future.

The difference between good and great depends on the consumer but generally speaking for “convenience” stores, customers expect quality products at reasonable prices that are convenient to find and purchase. Making the shopping process fast and frictionless is imperative.

Many convenience stores have moved into fresh and prepared foods to compete with fast food chains. Making fuel and food a one-stop shop makes sense. The challenge is to make the food better than fast food chains and streamline the checkout process. QuickCheck appear to be on the right path by offering products and services that appeal to the needs of time-starved consumers.

Braintrust
"This segment is RIPE for disruption and, from my experience in this space, freshly prepared food works. "

"In the words of Picasso, “Good artists copy, great artists steal.” Dean Durling and his terrific team have learned from Picasso."

"I think more than Millennials are going to like QuickChek’s new concept store."