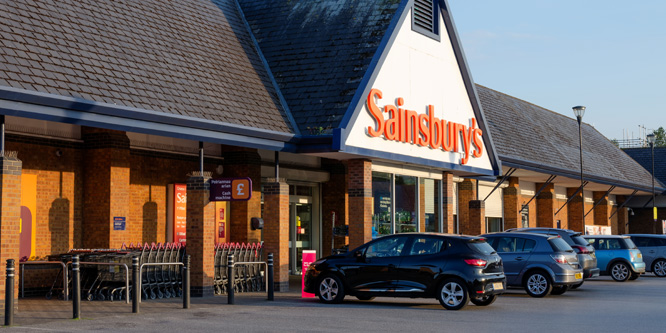 U.K. grocer Sainsbury’s has observed Amazon.com’s success with a third-party marketplace and plans to launch one of its own aimed at grocery shoppers.

Sainsbury’s intends to use its web presence to host products and offer services from third-party partners, according to MarketWatch. The marketplace, which is still in the planning stages, would offer options like home delivery of products or pickup through the store network and would recommend potential add-on sales to customers purchasing from third parties. The announcement comes as Sainsbury’s, the second biggest grocer in the U.K., faces both enhanced brick-and-mortar competition and increased interest in online shopping from customers.

Other big-name retailers have begun exploring the online marketplace model to profit off of third-party sellers, as well.

In February, Target announced the launch of an online marketplace called Target+, which offers a curated selection of products from third-party brands solicited specifically to participate, according to CNBC.

Walmart, for its part, has had an online third-party seller marketplace competitive with Amazon since 2009, even before the brick-and-mortar chain began its big push into tech with a spate of e-commerce acquisitions.

There has also been a recent stateside attempt at a grocery-centric third-party marketplace, launched by regional grocer Albertsons in October 2018 as part of its digital enhancement strategy. The online marketplace made 40,000 specialty items from third parties available to online customers at launch.

The effort may have had an impact, as Albertsons reported a 52 percent increase in e-commerce in Q4 of 2018, according to Supermarket News.

A third-party marketplace, however, is not a risk-free proposition. Problems with product quality and bad experiences with fulfillment can reflect poorly on the marketplace — possibly more so than the seller. Third-party marketplaces can also lead to cannibalization of sales on competing products that a marketplace-hosting retailer has available in-house.

In fact, Walmart recently began slowing the expansion of its marketplace. This move came despite posting strong quarterly gains last year due in part to the addition of a large number of SKUs from marketplace sellers.

DISCUSSION QUESTIONS: Will grocers including Sainsbury’s and Albertsons be helped or hurt over time as a result of operating online marketplaces? What do you see as the biggest challenges and opportunities in operating a marketplace?

Please practice The RetailWire Golden Rule when submitting your comments.
Braintrust
"For Sainsbury’s, the marketplace could provide an opportunity to promote its well-developed private brands in the digital space."

"Determining best practices and continuing to change as best practices evolve along with excellent administration of supply chain and product quality issues is key. "

"There are now several traditional retailers looking at a marketplace approach. This could start to really impact Amazon and start the fight back from other retailers."

As marketplaces continue to proliferate, I’ve been warning of the coming “marketplace mayhem,” mainly because marketplaces inherently involve handing off control. Even though Amazon has emboldened retailers to try their hands at marketplace management, they aren’t just passive plays. As pointed out in the article, when third-party sellers pull shenanigans – everything from pushing political buttons to poor quality and pricing games, their retailer hosts tend to get the blame. Grocery adds complexity to the proposition but I can’t imagine that Sainsbury’s isn’t taking this into consideration. For Sainsbury’s, the marketplace could provide an opportunity to promote its well-developed private brands in the digital space.

Wow — co-opetition and ecosystems rule. But they require a seamless exchange of data. I feel like a broken record and keep saying this – I even recorded a video on this last week…

While there is nothing wrong with marketplaces in general, this is an unwanted distraction for Sainsbury’s and is emblematic of a company flailing around for growth – especially after the failed deal with Asda. Management and corporate focus should be solely on getting the core business into shape from its current state of disarray. Availability is terrible, store standards are abysmal, service is lousy. These things need to improve forthwith as the company is losing share in grocery and, on the current trajectory, does not have a bright future.

As discussed in several RetailWire articles, many brick-and-mortar retailers are attempting to emulate the success of Amazon. This effort by Sainsbury’s is more of the same. The key for Sainsbury’s success in this endeavor is to make third-party products available that appeal to its target market. Sainsbury’s and others need to put down the shotguns and pick up the rifles.

The opportunity is to create a profitable niche in the online marketplace. Potential downsides have been highlighted, namely problems with product quality and bad experiences with fulfillment. Thus the need to choose partners wisely.

Retailing isn’t like Highlander. In the end there can be more than just one, but I think the marketplace market is starting to get a little crowded and there is sure to be a day of reckoning somewhere down the line. My guess? Over time we will see best practice operators emerge, but not before lots of companies make large and very public mistakes.

Determining best practices and continuing to change as best practices evolve along with excellent administration of supply chain and product quality issues is key. Those who can do both will excel and leaders will change as the marketplace changes.

There are now several traditional retailers looking at a marketplace approach. This could start to really impact Amazon and start the fight back from other retailers. The advantage for traditional retailers is that they already have the brick and mortar presence to offer easy collections and returns, and they have a quality brand presence, particularly in the case of Sainsbury’s.

It’s funny that people assume that they will struggle against Amazon. We could start to see a change that will challenge Amazon and start to hurt it. However, many retailers will not be able to move in this direction as it takes scale and resources, but the larger ones can certainly fight back.

I believe there is a limit to the number of exchanges that the market can support. This looks like a Plan B after the Asda deal went south.

Braintrust
"For Sainsbury’s, the marketplace could provide an opportunity to promote its well-developed private brands in the digital space."

"Determining best practices and continuing to change as best practices evolve along with excellent administration of supply chain and product quality issues is key. "

"There are now several traditional retailers looking at a marketplace approach. This could start to really impact Amazon and start the fight back from other retailers."