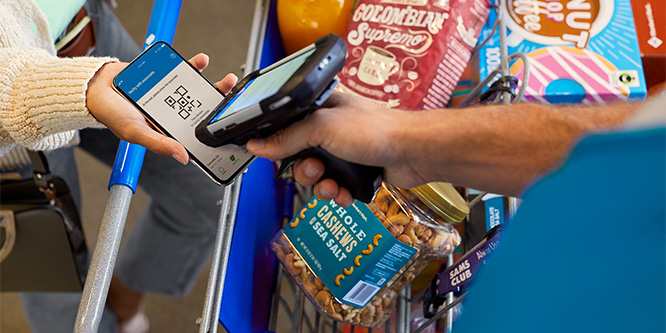 Sam’s Club learned some fast lessons after the novel coronavirus pandemic hit the U.S. last year. Much of that knowledge is now enabling the warehouse club chain to double-down on customer-focused steps that helped it increase its new member numbers and retain a higher percentage of existing ones during that time.

Curbside pickup was among the initiatives that Sam’s members gravitated to as social distancing and occupancy measures were put in place to reduce the spread of COVID-19. Kathryn McLay, Sam’s president and CEO, said at last week’s NRF Retail Converge conference that the chain had been “playing” with the concept at about 16 clubs before the pandemic hit.

“We decided going into the pandemic, boy, we better escalate this and we rolled it out to the nation in about seven weeks,” said Ms. McLay, who added that the option helped grow Sam’s business last year as members were able to shop in a secure and contactless manner.

Sam’s CEO also pointed to its Scan and Go technology as another contactless confidence builder for members shopping its clubs. She said her company saw “extraordinary growth” in usage of the technology that allows members to use their phones to purchase items while shopping in the club and then bypass the checkout.

Ms. McLay said Sam’s was also focused on expanding the capabilities of Scan and Go to process electronic balance transfer payments and SNAP transactions. Conducting alcohol sales through the technology is another capability that Sam’s is trying to work out.

Sam’s is committed to expanding members’ use of the technology and has reached out to those who do not use Scan and Go to determine why not. One of the main barriers was that members did not want to download another app on their phones. Sam’s team developed a “digital demo” in response whereby members could test the technology by using a QR code. “It’s all of these like little micro innovations that all build into actually creating this delightful environment where you’re growing your relationship with members,” said Ms. McLay.

“If you put profit as the primary goal, you fail. You always have to start with how am I creating value.” Ms. McLay said that means offering great items at disruptive prices for Sam’s members.

DISCUSSION QUESTIONS: How likely are most consumers who became new members of warehouse clubs during the pandemic to remain so as disruption concerns ease? How do you see Sam’s merchandising and operational capabilities stacking up against its warehouse club competition?

"If the consumer – in his/her opinion – picked the right club of which to become a member, it is almost a given that the consumer will remain one."

"Of course it is impossible to say for certain, but my bet is Sam’s — and Costco — and BJ’s will hold a large percentage of their “new” COVID-19-stimulated customers."

Convenience remains king. While some membership might fade away from wholesale clubs as people find they don’t need as much food/supplies in bulk, many will stick to the clubs now that they are used to the selection, service and for that treasure hunt experience. The value of a membership was pretty well established before the pandemic and was heightened during the crisis. Sam’s Club has been a leader in technology such as scan and go. Curbside has been a big deal for both Sam’s and BJ’s. Costco is still testing curbside in a handful of locations, but has traditionally been slower to embrace some of the services that Sam’s and BJ’s are offering.

I think very few will cross-shop or even switch loyalty between Costco and Sam’s. Most have one or the other.
I don’t see specific references to new customers they acquired, but it is possible that existing customers are buying a lot more using contactless options. COVID-19 is a unique event could have attracted new subscribers who would not have otherwise joined. Generally speaking, the stickiness of warehouse club subscriptions is pretty high.

One of the few good things coming out of the pandemic is that so many retailers discovered just how much they can accomplish in a hurry when the chips are down. Many big box and warehouse retailers, previously burdened with departmental silos and bureaucracy, found ways to move fast on major operational changes. And as things slowly return to normal, these retailers are unwilling to lose this momentum to return to their old ways, which is a good thing because now that consumers have been exposed to more choices and greater integration of online and offline, they aren’t going to give it up. Consumers love having more choices such as curbside or BOPIS, but view retailers negatively if those options are taken away, even if the usage rate is low.

If the consumer – in his/her opinion – picked the right club of which to become a member, it is almost a given that the consumer will remain one.

Club stores operate on the principle of a limited but curated assortment with a focus on quality and value for money. The biggest benefit of that is making the customer decision-making process easy. All they need to focus on is making the purchasing process friction-free. The customers will stay longer if they can do that.

Of course it is impossible to say for certain, but my bet is Sam’s — and Costco — and BJ’s will hold a large percentage of their “new” COVID-19-stimulated customers. As to how Sam’s stacks up against the competition, adopting new technologies isn’t a sustainable strategy in and of itself since any of those services and technologies can be cloned by the competition.

Few things cut through the fog of retail bureaucracies better than crisis. It’s good to see that some businesses are looking to see how they could do better in the future without crisis by taking some of the lessons from the pandemic.

Will it work? Bureaucracy at all times ends up desiring its own existence more than the outcome the business desires. Executives must always, and at all times, be wary of this truth and use their wariness to create situations where important things happen by shifting outside of the bureaucracy.

"If the consumer – in his/her opinion – picked the right club of which to become a member, it is almost a given that the consumer will remain one."

"Of course it is impossible to say for certain, but my bet is Sam’s — and Costco — and BJ’s will hold a large percentage of their “new” COVID-19-stimulated customers."