Should Amazon be charging for ‘curated’ toy guide placements? 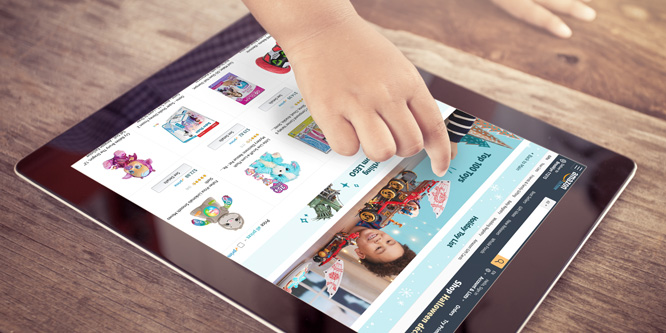 Amazon.com charged as much as $2 million for brands to be featured in its just-released Holiday Toy List guide. While less than a Super Bowl ad (estimated at $5.25 million for a 30-second spot), the payments underscore Amazon’s increasing clout in advertising and also some inherent conflicts.

According to documents obtained by Bloomberg, the more companies pay, the better placement and the more products they can showcase. Amazon’s goal was to sell at least $20 million in sponsorships for this year’s list.

One potential conflict is transparency. On its Holiday Toy List page, Amazon says the list is “thoughtfully curated to help shoppers quickly tackle even the lengthiest holiday shopping lists” and makes no mention that some items showcased may be backed by advertising funds. Parents may be thinking they’re viewing independent recommendations. Reports indicate it’s hard to define legally when paid advertising has to be called out.

Amazon said in a statement to the media, “Every product on our annual Holiday Toy List, which features family gift ideas from new releases to customer favorites, is independently curated by a team of in-house experts based on a high bar for quality, design, innovation and play experience. We source product ideas from many places, including our selling partners who have an opportunity to nominate their best toys for the season and increase visibility of those toys.”

Further, Amazon infers that the vendor payments are similar to co-op dollars, slotting fees and other vendor contributions that help brands gain space in Sunday circulars or on selling floors. Critics of such payments, however, have said they bias merchandising decisions by favoring large over small brands. Cameron Albert-Deitch wrote for Inc., “The hefty price tag creates a near-impassable barrier for small vendors on Amazon’s platform.”

Amazon has already become the third-largest online advertising platform behind Facebook and Google. Walmart, Target and Best Buy are also touting their ability to use digital footprints to connect purchase to advertising data and help brands target specific audiences.

DISCUSSION QUESTIONS: Is paying up to $2 million for a toy circular sponsorship in line with how co-op dollars have traditionally been used or is it a reflection of retail’s new advertising might? How do you think paid advertising affects merchandising decisions in product guides such as Amazon’s?

Please practice The RetailWire Golden Rule when submitting your comments.
Braintrust
"Unfortunately, these types of opportunities favor those that can afford to participate. But there are so many other ways smaller brands can compete."

"Sometimes products can be both thoughtfully curated AND sponsored. It doesn’t have to be one or the other. It’s up to Amazon in this case to keep those lines clear."

"Every now and then it’s nice to pick up a version of “Consumer Reports” in the quest for a little objectivity."

15 Comments on "Should Amazon be charging for ‘curated’ toy guide placements?"

There’s no question that size of business and depth of pockets has always been, and will always be, an advantage in reaching customers. But the ability to pay big bucks and then have your product referred to as “curated” strikes me as not being in the spirit of what “curated” is supposed to stand for. Legal definitions about paid advertising need not be debated. When in doubt, just call it out. Isn’t that why the “fine print” was invented?

This is no different than any other type of co-op advertising or marketing campaign. The article has a concern that small independent brands may not be able to afford to participate. When is the last time one of those small independent brands paid $5 million for a Super Bowl ad? Unfortunately, these types of opportunities favor those that can afford to participate. But there are so many other ways smaller brands can compete. Paid advertising is nothing new. This is just another way to get more product views.

For years I helped place products in “buying guides.” It was almost always co-op with the exceptions being when the retailer was trying to look unique/hip and when the market demand was explosive (think Furby, Cabbage Patch, Hatchimals…). Consumers should understand that they are always being marketed to.

It’s hard to fault Amazon for taking $2 million for placement, but in the interest of transparency, I think they should identify the items as sponsored. Amazon currently enjoys being the #1 search site for products partially because they are a great starting point for research. If customers begin to believe that Amazon is creating “fake reviews” or prioritizing big companies, it could undermine their credibility.

Amazon’s success has come from their unwavering focus on serving the customer and making it easy for the customer to find and get what they want. If they shift too aggressively toward manipulating customers to serve their own goals or those of their vendors and advertisers, it might damage the trust they have built.

As someone who has studied and worked in publishing, this is both upsetting and not at all surprising. Gift guides are generally meant to be editorially independent. If that is not the case, they should be clearly labeled as sponsored. Unfortunately, as we see here, that doesn’t always happen. I suspect that ad dollars have a significant impact on what products make the cut for gift guides of many major retailers. However, small businesses and independent retailers have an opportunity to create truly curated guides that shoppers can trust.

Thank you. Let’s have “curated” mean that the offering was … curated! NOT affected by co-op $$$ muscle. A level playing field based on product attributes, not marketing budgets. Big-budget brands have plenty of opportunities to flex their marketing muscle. Every now and then it’s nice to pick up a version of “Consumer Reports” in the quest for a little objectivity.

I don’t see how this is much different from what brick-and-mortar retailers have been doing since the dawn of print. The only variables are scale, reach, and cost. And while there may be examples of product or buying guides unaffected by filthy lucre, they are precious few and far between. You can fault Amazon for many things, but humming Retail Revenues’ Golden Oldies all the way to the bank isn’t one of them. After all, how many of those “independent and fully transparent” guides feature products not offered by the retailer that distributes them? And of the items that are featured in other channels, how many make it to prominence without co-op dollars walking them down the aisle to their pride of placement positions?

There is a long tradition of retailers charging brands for placements in their catalogs, advertisements, etc. When I was in retail some years ago now, we always charged brands for features and, yes, the better the feature the more you paid. However, I should also add that the sums were considerably smaller then – paying millions of dollars is prohibitive to the smaller players. There is also one very significant difference from what we are seeing now. We would always select the range first and then offer everyone a deal in the promotions. We did not sell to the highest bidder. How can you say you are selective if you simply take money from anyone willing to pay a very high price? That is a danger to the brand – if they sell rubbish because that company is happy to pay, customers will soon show their feelings by shopping elsewhere. So in essence, it is standard practice but it seems as with all things Amazon that they are doing it in a bigger way and… Read more »
1
|
0
-   Share

The approach of Amazon in charging large amounts of money for placement in their curated holiday guide is absolutely in keeping with traditional grocery and retailer practices. The question to ask is whether that approach, which is tried and true, is the best approach to use solely in developing their holiday circular.

In this time when consumers are seeking authenticity from the companies where they choose to purchase, a “carefully curated” holiday guide that in fact is determined more by dollars than value of the item, would seem to be a practice that would break down the trust between Amazon and customers who might otherwise use that catalog to determine their holiday purchases.

The $2 million dollar price tag for the ad on Amazon certainly reflects its strength in the toy category. For many brands, Amazon may represent more than two-thirds of total online sales. I think that this use of co-op advertising is in line with how these ad dollars have been used in the past. The only difference is that the co-op dollars will be spent for an online retailer for a digital circular.

This is no different from traditional grocery, retail and even print catalog channels. The brands with the bucks get the best placements. What is new is the fact that due to the 24 hour media cycle and social media channels, customers are becoming aware of this practice, albeit selectively since Amazon is under more scrutiny than a Kroger’s. As for calling the toy selection “thoughtfully curated,” in my opinion this is just not ethical as it does intend to lead customers to believe that some independent, unbiased party selected what they thought would be the best toys for holiday.

Approaches like this are seriously degrading the Amazon customer experience — rather than going to Amazon and finding what we want, we now go to Amazon and are given what Amazon has been paid to give us.

A good friend recently searched for a power tool. He got two pages with only a single copy of the tool he wanted — and the rest of the listings were those Amazon was paid to present him or were Amazon’s own unrelated products.

I understand why companies like Amazon feel they can’t turn down these revenue opportunities, but they’d be far better off to focus on customers than to prove to customers how hungry they are for revenue.

Sometimes products can be both thoughtfully curated AND sponsored. It doesn’t have to be one or the other. It’s up to Amazon in this case to keep those lines clear. If they’re totally driven by advertising dollars, consumers will catch on pretty quickly — whether it’s called out directly as advertising or not.

Amazon potentially has the data in order to help these adverts reach the optimal audience — so even if there is paid placement going on, one would hope that the element of context is still in use. Consequently this could become a win-win for Amazon (monetizing data) and the toy company.

What will be interesting will be if we start to hear calls for Amazon to make the payments made much clearer to consumers in the way that Google highlights sponsored search results.

Paying for advertising space is common. The Amazon claims of a catalog curated for consumers and implying impartial expert evaluations when placement is based on advertising dollars is a problem. This type of misleading claim is why consumers, especially younger ones, distrust advertising. In this age of transparency, Amazon’s claims are not appropriate.

Braintrust
"Unfortunately, these types of opportunities favor those that can afford to participate. But there are so many other ways smaller brands can compete."

"Sometimes products can be both thoughtfully curated AND sponsored. It doesn’t have to be one or the other. It’s up to Amazon in this case to keep those lines clear."

"Every now and then it’s nice to pick up a version of “Consumer Reports” in the quest for a little objectivity."