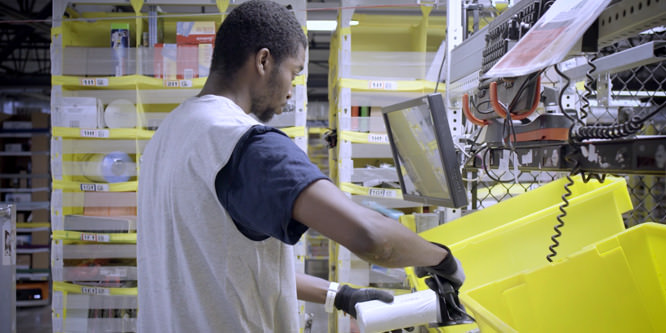 Many sellers on Amazon Marketplace are heavily reliant on the platform and yet their top-three fears all concern the e-tail giant.

According to a survey of 1,600  third-party sellers on Amazon.com from Feedvisor, the biggest worry was of the e-tailer taking away their privileges, 52 percent. That’s followed by high fees on the platform, 50 percent, and Amazon competing directly with them, 45 percent.

Coming closely behind in fourth was negative feedback/reviews from customers, 42 percent. The vast majority of Amazon merchants sold less than $250,000 annually and had just one to five employees.

The heavy concentration for third-party sellers isn’t so surprising given that Amazon has for many consumers become the first site to search when looking to make a purchase.

Amazon Marketplace also appears to be an easy place for sellers to find success:

Still, sixty percent indicated they planned to expand into other marketplaces in 2017.

Outside of Amazon, 65 percent said they sell on eBay and 60 percent from their own site. E-commerce channels such as Rakuten, Walmart and Jet ranked less than 10 percent. Asked where they want to expand, the top answer was Walmart and “my own website,” both 29 percent; followed by Shopify, 28 percent; eBay, 23 percent; Jet 22 percent; and etsy, 13 percent.

DISCUSSION QUESTIONS:  Should third-party sellers simply try to ride Amazon’s success or be more aggressive about diversifying? Are their Amazon fears rational? What are the best options for diversifying?

Please practice The RetailWire Golden Rule when submitting your comments.
Braintrust
"Amazon can be a great tool to build your business. But you cannot rely on it 100 percent. That is where the danger lies."

"This is not likely to slow down, maybe ever. So if the third-party seller is a rogue then yes, they should worry."

"In the grand scheme of things, Amazon Marketplace is a strategy to keep consumers coming to Amazon.com no matter what it is they’re looking for..."

14 Comments on "Should Amazon’s third-party sellers worry about Amazon?"

The great thing about Amazon Marketplace is that it offers an incredible “turn key” solution for integrated marketing, selling and distribution. Very few if any third-party sellers could come close to matching Amazon’s service levels.

The danger is that the “turn key” belongs to Amazon, not the marketplace seller. The third parties’ fears of changes in pricing and Amazon’s own aggressive expansion of marketplace categories are very real. Diversification is one answer, but it is not easy or inexpensive.

The most important thing that third-party sellers can do is to establish a relationship with their customers who purchased a product. A modern, efficient CRM is one of the best investments any seller or retailer can make. It’s a whole lot easier and more efficient to sell to a satisfied existing customer than to acquire a new one.

Most third-party sellers are not big enough, nor financially well off enough, to succeed, let alone exist, without Amazon. While they may have fears about Amazon, they can’t live without it. Amazon offers the biggest marketplace and the highest levels of consumer trust, something most small merchants can’t buy.

As an expert Amazon seller, I can tell you that brands need to do two things to survive. First, figure out how to use Amazon to build your brand and awareness. Make sure you are using all other marketplaces as well as your own e-commerce website in addition to Amazon to sell to consumers.

Second, sell brands you can control or that are exclusive. Online arbitragers who are competing for the buy box with hundreds of other sellers for the same item are the most at risk.

Amazon can be a great tool to build your business. But you cannot rely on it 100 percent. That is where the danger lies.

Third-party sellers must diversify. I know several who have seen their sales at Amazon drop dramatically as Amazon shifts policies without warning. To depend too much on Amazon remaining the same is a recipe for disaster.

For example, Amazon is now asking for advertising fees in order for these sellers to rank high in unbranded search results. We can figure those fees are essentially slotting allowances with a different name.

Amazon is, after all, another digital culture. Like Facebook, Google and LinkedIn, that means it feels free to pivot policies without warning — and only the very largest sellers can gain the traction needed to stay on top of what’s happening.

For any business, it makes sense to understand the potential threats in the marketplace. Typically, we talk about it in terms of conducting a SWOT analysis: Strengths, Weaknesses, Opportunities and Threats. Understanding where Amazon fits into that analysis (maybe in all four sectors) will help the business plan for the future (duh).

Third-party sellers have an obligation to themselves to understand what barriers they face now and in the future. Diversification may be an answer in the long term, but it should not be an initiative without a plan.

Diversification of retail channels may be an important solution. But how will it impact the business overall? It may very well be that a small business does not have the financial fortitude for major initiatives, and so it must prepare other “for now” and “just in case” plans. Returning to the SWOT analysis and adjusting from time to time as the marketplace/Amazon changes will help the plan and process be more effective.

As with most things in life, extremes tend to lead to bad things. Leveraging Amazon to have an opportunity to compete is essential but make certain to diversify and augment Amazon with other marketing and merchandising channels and/or vehicles that make sense for the brand and business. Ask any agency or business that is forced to rely on a single client — it always leads to difficult times.

I personally think the sellers are getting way too greedy and out of hand with their pricing and are going to price themselves right out of the market. Just this week my mom made two purchases from Target online and Walmart because not one Amazon seller had a normal price, they are price-jacking us to death and will lose.

There are too many other options to go to and all are delivering in two days and some with free shipping. Also just like most markets like Shop Rite and Wegmans, Amazon created their own brand “Wickedly Prime” and are going to promote that before everyone else! So you third parties should watch your backs.

Jeff Bezos created Amazon to lift one boat — his own. The marketplace exists for many reasons, none of which are to make other’s businesses/incomes viable.

Marketplace selling is one arrow in a quiver that needs to be full of multiple points of attack, or else changes to the marketplace and/or its policies and/or Amazon’s tactics will inevitably be disruptive or deadly to a merchant’s business.

While using the Amazon Marketplace as a sales outlet for your business is a great source of revenue and Amazon (especially FBA) makes it truly easy, this can’t be the only source of sales. The risk is too high if you are completely dependent on Amazon for your business. Should businesses be worried that Amazon could change the playing field any time? Sure, but a smart business will also leverage other outlets such as their own websites, eBay or potentially other retail marketplaces to balance their revenue streams.

Amazon has proven to be the go-to place for an increasingly large share of shopping “trips,” even though the fluidity of this marketplace causes issues for both sides of the buy/sell event. So far this doesn’t seem to matter much. Although, some suppliers have implemented tighter buying contracts and Amazon has made a number of changes to cull out troublesome third-party sellers.

This is not likely to slow down, maybe ever. So if the third-party seller is a rogue then yes, they should worry. Unfortunately, even legitimate vendors can get caught up in Amazon’s monitoring processes. Vigilance is the key.

There are reasons that retailers like Birkenstock, Adidas, and many others have made tracks away from Amazon (including competition from cheap knockoffs that can’t be controlled even by Amazon and competition from Amazon itself on many products). In the case of smaller retailers, it’s so hard to leave Amazon to make their own way.

All-in-all, tremendous advice for retailers, and the cost for that savvy, succinct advice is priceless!

No business wants to be 100% reliant on things out of their control so yes, 3rd party sellers should diversify and at the least get their products on all of the other main marketplaces with a focus on Alibaba, as well as build their own brands and websites if applicable. However, I don’t see Amazon changing course radically on this any time soon as they are pretty much quadruple dipping on high margin profits through these sales. Amazon gets: Fee from each sale Advertising dollars from most successful sellers and this area is only going to grow and be more competitive with more vendors entering this space. They have not even started to tinker with new ad units and placements. Fulfillment for the large majority If the retailer has their own site, pretty sure they are using AWS The one curve ball will be how Alexa presents marketplace sellers over time. As voice grows, people are not going to want to hear Alexa rattle off dozes of other sellers for a product. She will most… Read more »
0
|
0
-   Share

Neither diversifying or further investing in Amazon will protect Marketplace sellers — they need to get in the mindset that their business window is limited and focus on having liquidity when that window comes to an end.

In the grand scheme of things, Amazon Marketplace is just a strategy to keep consumers coming to Amazon.com no matter what it is they’re looking for — a strategy that compounds and compounds over time. If all the marketplace sellers moved to eBay/Alibaba/Craigslist or whatever tomorrow, it might hurt Amazon a little, but it would destroy the marketplace sellers. Jet.com could maybe make a pass at them — but it remains to be seen how long Jet.com can sustain its current push before settling into place.

I’m no particular fan of Amazon, but unless they actively screw up, again and again, with a lack of foresight equivalent to Kodak, Blackberry, Nokia etc, they’re going to stay #1 online.

Is paranoia paranoia when it’s well-grounded in reality? Of course Amazon third-party sellers should worry — sitting on a stool with one leg is always a bad. Omnichannel transcends technology platforms and marketing as a retail essential.

Third-party sellers must explore diversification with the same vigor with which they leverage Amazon.

Braintrust
"Amazon can be a great tool to build your business. But you cannot rely on it 100 percent. That is where the danger lies."

"This is not likely to slow down, maybe ever. So if the third-party seller is a rogue then yes, they should worry."

"In the grand scheme of things, Amazon Marketplace is a strategy to keep consumers coming to Amazon.com no matter what it is they’re looking for..."