Should American Apparel bring its sexy image marketing back? 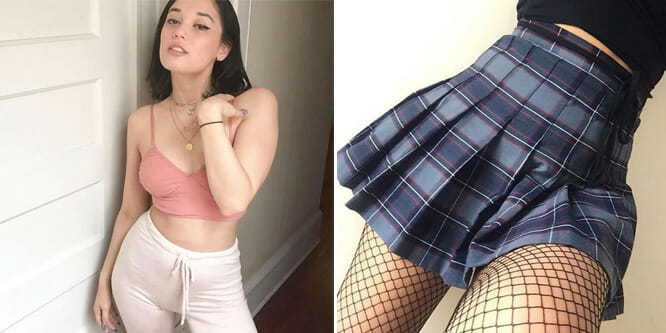 American Apparel, long criticized for ads featuring women in provocative poses, is being relaunched by a new owner, Gildan Apparel, and many are surprised that its comeback campaign is still somewhat risqué.

While the highly suggestive, often topless poses of prepubescent models that American Apparel had been accused of using in the past are gone, many scantily dressed models and the occasional “crotch shot or the come-hither look” remains, according to Retail Dive. The return stands out even more given the “Me Too” movement and the current scrutiny over sexual assault and harassment in society.

“We don’t believe in covering up,” Sabina Weber, American Apparel’s head of brand marketing told Adweek. “Women feel so conflicted about being sexual right now, but we’re taking a position to still be sexy, unapologetically so, but from an empowered female perspective.”

The brand’s first all-female executive team claims to be making other changes:

The “Back to Basics” campaign started running in the fall with billboards, bus shelters and other outdoor ads in major cities.

“The goal of the new campaign is to appeal to female sexuality from a position outside of the male gaze,” writes Tom Higgins for Promo Marketing. “While this is in stark contrast to the brand’s advertising under the supervision of Charney, it is important to realize that the goal of ‘Back to Basics’ is not to distort or conceal the past.”

DISCUSSION QUESTIONS: What do you think of American Apparel’s toned-down yet “sexy, unapologetically so” marketing approach? Should American Apparel have abandoned the suggestive imagery that had defined its past marketing campaigns with its relaunch?

Please practice The RetailWire Golden Rule when submitting your comments.
Braintrust
"For Amercian Apparel, any publicity at this stage is good publicity."

"This approach is smart and shows that Gildan might have the chops to make American Apparel back into a solid operation."

"Why not keep it real and ask us why we like your clothes, and then base your campaign on the clothing, not lack thereof!"

18 Comments on "Should American Apparel bring its sexy image marketing back?"

It’s really a matter of opinion. What one person feels is sexy another may find offensive. American Apparel has built an audience and only they can determine if their new marketing strategy is working. The old phrase that “sex sells” is still true today. Using real people is a good marketing technique because it supports the brand showing that “you” can look like this rather than a model getting paid to pose. So give it time, but I think they’ll be successful.

Controversy and sexuality sells. They are simply going after our primal emotions. Certainly you must use models over 18, but they don’t have to look their age. Does it really matter if the photos are touched up? It’s just a segment of the business, like Victoria’s Secret which has a certain customer base.

“they don’t have to look their age” — wow. There may be a legal difference, but in my view not an ethical difference between using an under-18 model and one who looks underage. In either case, the brand is sexualizing youth in pursuit of profits.

I personally am nonplussed by the notion that AA’s leadership approved this brand position “from an empowered female perspective,” but I’m neither female nor particularly empowered so I’ll have to defer to others on that.

I agree. It’s hard to believe that this direction is coming from an all female executive team.

Our “primal emotions” also include killing each other for food, but just because one believes certain behaviors are “human nature” doesn’t mean that they, in fact, are or, if they really are imprinted deep in the folds of our reptilian brains, that they should be encouraged and/or acted on. This is the kind of logic that argues that women who are dressed in a way that excites certain men — which presumable could be a hazmat suit in some cases — are “asking for it” if they are assaulted. As to the notion that models “don’t have to look their age,” what exactly does that mean? Are you arguing that it is O.K. to sexualize women who appear to be underage, but aren’t? Put another way, is the sexualization of a child alright if — in the end — it’s “just” an illusion? And, yes, it does matter if the photos are touched up, or what body type the models are, or how old they are/or are made up to look. As the “#MeToo” movement… Read more »
0
|
0
-   Share

As we all could agree, provocative advertising and sexy images sell. Controversy seemed to work well for the American Apparel brand in the past, and may still resonate well today. For Amercian Apparel, any publicity at this stage is good publicity.

However, the American Apparel brand upon its relaunch has significant challenges ahead, as they face an uphill battle to reestablish the brand, become a relevant brand with Generation Z and compete in an ever congested, hyper-competitive fashion apparel space.

I think it’s a disgrace! They say they will use different “body types”, yea right, they aren’t going to use the chubby girl or guy body type. Just variations of skinny. No one looks the way their models’ bodies look and it only makes the rest of us feel badly about our unairbrushed bodies! No need to have inappropriate half naked people in ads. We do not want to see that! Just promote the clothes in a tasteful way. These aren’t pics you would post on your social media as your potential boss might see it. They just went backwards 10 years. Pretty sure they didn’t hear about the “Me Too” movement or obviously don’t care about it.

Some football icon once said, “go with what brung you here.” The same applies for American Apparel in my book. Abercrombie & Fitch for the most part too. Besides, once you’ve removed the head of the snake (both CEOs), you’ll probably be OK. That was the problem more than the marketing.

What’s challenging is changing to a much softer approach and then trying to get that original irreverence back. In other words, brand consistency. Or in both of their cases; stop being so confused. Stick with what brung you here.

You mention football. In Asia we watch NFL sports shows. When the men host they sit behind a desk. But when women analysts host the show, the desk is gone and all we see are women with model bodies in short skirts showing off their shapely legs. Sky Rota makes a good point that they will only use various varieties of skinny. Mr. Lucas below mentions fitness models which are becoming more popular, women who are both thin and muscular.

Yes, it is their DNA. Unfortunately highlighting its “made in the USA” heritage isn’t going to generate buzz. They could try and focus more on fitness models which are driving social media or work to sign social media influencers, and avoid traditional celebrities or the malnourished models of their past.

The #MeToo movement is largely a reflection of problematic male behavior, and suggesting that females should “cover up” as a solution or response to the sexual assault and harassment in our society frankly misses the point (to put it mildly).

Meaghan, I agree that #MeToo highlights a male problem that has problematic consequences for women. I also agree that anyone should be free to wear anything they like. No one is suggesting mass adoption of burqas as a counter to misogyny or poor male impulse control. The question here though is whether it is ethical for a company to exploit underaged sexual imagery in order to sell overpriced sportswear. That’s a lot different than suggesting that women “cover up” because many men insist on thinking like pubescent boys.

You’re totally right. The roots of sexual assault and harassment have their base in antiquated cultural notions of male privilege, sexism and chauvinism that have been used to suppress women’s collective right to self-expression, economic, social and political autonomy, etc. for centuries.

A brand can’t simply become something different because a new owner wants it to be. It always leads to failure. A brand must evolve from that starting point where it sits in the minds of the shoppers and buyers.

Unfortunately, marketers too often believe they are masters of the universe and by merely changing their advertising become something different. It doesn’t happen that way — and never will. Shopper minds change slowly and only along paths that make sense to the shoppers — no matter what analysts want.

This approach is smart and shows that Gildan might have the chops to make American Apparel back into a solid operation.

We’re all talking about how sex sells and if it works, keep doing it. And yet Sky, speaking for Gen Z, says something we hear a lot in our focus groups: “We do not want to see that! Just promote the clothes in a tasteful way.”

I’m still a big believer in the retail adage, “Listen to your customers, they’re smarter than you.”

I’m with you as I don’t get the “goal to appeal to female sexuality.” What? And if this is the best an “all female executive team” can come up with, we are in trouble!

I personally have ALL my “merch” (logo merchandise) on American Apparel shirts. I tried lots of clothing out before choosing them for all my merch. You know why I chose them? Because they are Made in the USA and because the tag doesn’t scratch your neck and make you have to cut it out. But most of all, the shirts never ever shrink or fade no matter how many times you wash them! Why not keep it real and ask us why we like your clothes, and then base your campaign on the clothing, not lack thereof!

I get what you are saying, Sky. It’s a conflicting message for a lot of us. I do love and support that their products are made in the USA. The ads, not so much.

What do I think of it? Very little.

Advertisements could be attractive to the viewers and yet not too risque. I think the advertisements have been overdoing the sexy aspect, such that they look pornographic. I think a civic minded advertiser should bear a responsibility to the public to upkeep a moral ethic.

Braintrust
"For Amercian Apparel, any publicity at this stage is good publicity."

"This approach is smart and shows that Gildan might have the chops to make American Apparel back into a solid operation."

"Why not keep it real and ask us why we like your clothes, and then base your campaign on the clothing, not lack thereof!"