Should Santa be modernized? 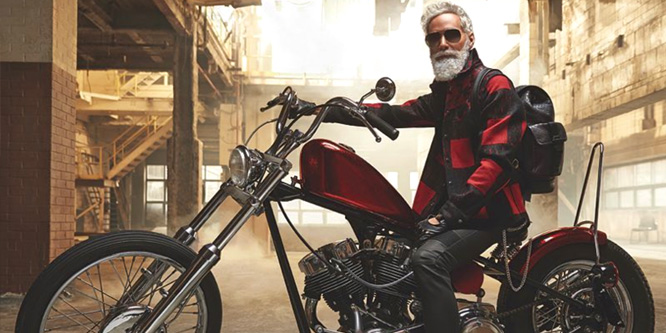 A survey catching some attention last week explored how Santa should be rebranded to become more modern. Two updated Santas — Fashion Santa and Hipster Santa — in fact already have legions of fans.

The more famous is Fashion Santa, who made his first appearance at Toronto’s Yorkdale Shopping Centre in 2015. Played by professional model, Paul Mason, the svelte Fashion Santa went viral after starring in Yorkdale’s holiday campaign decked out in designs from Burberry, John Varvatos and other top designers. Soon came fashion magazine spreads and 21,000 Instagram followers.

Mr. Mason recently told 7 News in Miami, “It went local, then it went national and it just blew up.”

#YorkdaleFashionSanta wants you to be the first to know about #BlackFriday offers! Sign up now! • link in bio • #YorkdaleBlackFriday #YorkdaleCheer

At the mall, scores of guests, including many adults, over the years have taken selfies with Mr. Mason, who often wears a red leather jacket in meet and greets.

Also in 2105, Hipster Santa — sporting a man bun, heavy-rimmed glasses, knit zip-up sweater and ”Naughty” and “Nice” tattoos on his forearms — began appearing at Pioneer Place in Portland, OR. Devotees encountered ninety-minute waits to see him, and he has become a local celebrity. Heralding his return this year, Pioneer Place wrote on Facebook, “Visit the big guy himself for a unique Portland experience!”

Guess who’s back?! Hipster Santa (and his man bun) will be making appearances at @ShopAtPioneer on Thursdays starting TONIGHT. Who’s taking advantage of this photo op? 🎅🏽 pic.twitter.com/87ASQWolSu

Some ads over the years have featured skinnier or otherwise different versions of the fictional character, but not many have veered from the classic Santa that originated from a Coca-Cola advertising campaign in 1933.

Last week’s survey from UK-based GraphicSprings, however, offered some suggestions by asking U.S. and U.K. consumers “how they would modernize Santa.” Many were reluctant to change Santa’s image. But among those who wanted an update, suggestions earning more support were that he should go on a diet, should get a new hairstyle and have tattoos. Other popular suggestions were that he should be in a flying car, “be more hipster, have an iPhone and use Amazon Prime.”

DISCUSSIONS: How would you modernize Santa? Does the stir created around Fashion Santa and Hipster Santa speak to an opportunity for retailers and brands to experiment with the fictional character in campaigns?

Please practice The RetailWire Golden Rule when submitting your comments.
Braintrust
"Santa can be whatever people want him, her or it to be. And there is no harm in anyone having fun with the concept. But for me, Santa will always be the traditional version."

"What? Santa with tattoos? Santa on a motorcycle? I think there are better ways to infuse creativity into Christmas campaigns..."

"Where to start with modernizing Santa, a white old dude in cosplay hanging around malls and kids. I’m fascinated that in today’s woke society he's still a vehicle for brands."

18 Comments on "Should Santa be modernized?"

It’s okay to have a little fun but some things are best left alone, and Santa is one of them. With all the confusion in the world today, Santa remains one icon that little children everywhere recognize, respect and adore. Let’s not confuse them any more than we are already are, as in today’s world; political correctness matters more to most than what is right or wrong. Let Santa be Santa the way we all know him, think of him and appreciate him.

This may work in pockets on the East and West Coasts, but tweaking Santa will be at brands’ and retailers’ own peril. Some things just should not be played with. Perhaps making Santa less commercial may be just the tweak Christmas needs.

I guess Santa can be whatever people want him, her or it to be. And there is no harm in retailers or others having fun with the concept. However, for me, Santa will always be the traditional version.

As to what Santa really is, the lines from Mr. Kringle on Miracle on 34th Street say it best…

“I’m not just a whimsical figure who wears a charming suit and affects a jolly demeanor. You know, I’m a symbol. I’m a symbol of the human ability to be able to suppress the selfish and hateful tendencies that rule the major part of our lives.”

Where to start with modernizing Santa… a white old dude in cos play hanging around malls and kids. I’m fascinated that in today’s woke society he is still a vehicle for brands at all.

It’s one thing to have fun, as adults, to play with rebranding what Santa is. I believe that a lot of it is a tongue-in-cheek exercise. I really think we should never forget for whom the magic of Santa Claus is intended. Hipster Santa? Good marketing tool for brands and image, and that’s not really new. But to throw the old, rotund and jolly Santa to the back of the sled? Big mistake.

Yes Virginia — there is a Biker Santa, with his reindeer harnessed together with a Harley primary drive chain — no belt drive for St. Nick — the new fallen snow gleaming off his shiny black leathers, his motorcycle boots giving him great purchase as he slides down the chimney and his elves sporting their colors with the distinctive and hard-fought-for “North Pole” bottom rocker … And a Hipster Santa — his artisan-crafted, sustainable-energy fueled sleigh powered by a team of AI-led free-range, reindeer raised on a diet of Finnish probiotic yogurt and organic kale, his Featherbird slippers gliding silently across the floor toward the quinoa salad you left out for him … And the OGS himself, the Original Gansta Santa, his sleigh blasting mad beats through the night as he chugs his bottomless bottle of Dom and sucks on his bong, his Glock ready to mow down all those who have been naughty and bust a rhyme for those that have been nice. Come on — it’s Christmas. It’s bad enough that there is… Read more »
2
|
0
-   Share

Ryan, this is so well written that I believe you can have a second career as a comedy writer. Could not agree with you more.

Of course people take selfies with modern Santas, we’ll take photos with anything. We live in an Instagram world.

You can have fun with “modern Santas” but they are not Santa. Santa is well-loved and he doesn’t need a makeover. It would be a mistake to try to make him anything other than the chubby, plump, right jolly old elf that he is.

Should we not forget that the “traditional” Santa that my colleagues seem to lamenting is a figment of none other than Coca Cola, if not The Night Before Christmas? Check out the images of Santa through the ages or the current images of Santa around the world.

These “modern” Santas are cool and I doubt they will scramble any kid’s brain.

Gene, you are right, but let’s remember that Clement Clark Moore’s poem “A Visit From St. Nicholas,” perhaps better known today as “‘Twas the Night Before Christmas,” first appeared in the early 1880s and Haddon Sundblom’s “traditional” image of Santa, inspired by the poem, which you correctly identified as a Coca-Cola marketing ploy, debuted back in 1931, so the visual meme has been with us — in one form or another — for over 130 years.

This is a great example of the fragmented consumer market. Of course Santa Claus can have different personas – Santa already has lots of variations around the world. Now Santa may vary based upon consumer groups with different world views — bikers, hipsters, traditionalists! etc. — this is beginning to sound like a marketing research project report. With different Santas appealing to different consumer groups, brands can pick and choose which Santa appeals to which target segment and we continue to be more divided.

Don’t mess with Santa! While these are clever attempts to make Santa hip and increase brand awareness for these retailers, I hope children don’t see these images or live Santas, as it will confuse them. What? Santa with tattoos? Santa on a motorcycle? I think there are better ways to infuse creativity into Christmas campaigns than recreating Santa.

Our modern image of Santa Claus is actually not based on the Coca-Cola marketing campaign version, but rather of political cartoonist Thomas Nast who drew several versions over the years, but captured ol’ Saint Nick in all his cherubic glory in 1881 for Harper’s Weekly (his illustrations for Clement Moore’s classic poem “A Visit from St. Nicholas” came close but had not got all the way there). Interestingly, The Smithsonian indicates this iconic picture of Santa Claus is actually pointed propaganda based on the government waffling over paying the army higher wages. He’s wearing an army backpack, not a bag of toys; an army dress sword; is carrying a toy horse to symbolize the Trojan horse that represents the government’s duplicity; and is carrying a pocket watch with the time set at 11:50 to represent the late hour for passing the pay raise. As for changing him, I think it’s fine for a company to offer their own versions on occasion — the various descriptions by Ryan Matthews above are inspired — so long as… Read more »
0
|
0
-   Share

These are great marketing opportunities for whomever thinks them up. Why not have the Santa of your dreams or whatever? Sort of like Barbie. But the bottom line: there is just enough of the original Santa to recognize him and let’s hope he still serves the same purpose. For my 2 cents.

Around the world, Santa (or whatever they call the icon locally) takes on various forms, as has been the case for years. Therefore, local evolution of the appearance of him (umm, BTW, why is “he” always a “he”?!) is only natural.

The iconic images of Santa Claus have thrilled children for ages. Sometimes it’s best to leave things alone. These newfangled versions of Santa might amuse those too old and busy to remember the joys of their own childhood, but such images surely would confuse today’s youngsters. As a traditionalist, I believe Christmas marketing should stress wholesome values and seasonal images. We have the rest of the year to be cool and hip.

You’re treading on dangerous territory here. “Modernizing” Santa is age old — think of ’50s promos where he arrived in a helicopter — but it’s usually centered around his …. uh, gear; depiction of the figure himself has tended to remain static.

And as far as national/major brands go, I think that’s the right approach. If a local strip club wants to have an X-rated Santa or whatever, I don’t see any harm. But I wouldn’t want, say, Target to have one dressed in surfer garb. As the saying goes “think of the children!”

And with that, I’ll play Santa myself: the Merriest of Christmases to all in RetailWireLand!

Braintrust
"Santa can be whatever people want him, her or it to be. And there is no harm in anyone having fun with the concept. But for me, Santa will always be the traditional version."

"What? Santa with tattoos? Santa on a motorcycle? I think there are better ways to infuse creativity into Christmas campaigns..."

"Where to start with modernizing Santa, a white old dude in cosplay hanging around malls and kids. I’m fascinated that in today’s woke society he's still a vehicle for brands."