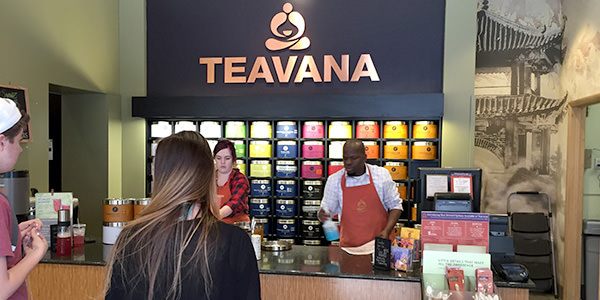 Starbucks has been instrumental in creating what we now know as “coffee culture” in the U.S. over the past few decades. But its attempts to create a similar space for coffee’s less bold cousin, tea, have been less successful. The company recently announced that it was closing the majority of its Teavana “tea bars.”

According to ABC News, Starbucks is converting the three Teavana locations in New York into Starbucks coffee shops and closing down the location in Beverly Hills. The remaining Teavana in Seattle will stay open as a place to experiment with new ideas. The 350 Teavana retail stores, which sell CPG tea and tea-related accessories and have no foodservice element, will not be affected.

Starbucks began exploring the tea-only store concept in 2012. With talk of customized tea blends and immersion in all things tea, it was clear at the time that Starbucks was looking at pioneering a “tea culture.”

Around the time of the Teavana acquisition, Starbucks had planned to convert more Teavana retail outlets into tea bars, according to ABC News.

The Teavana closures echo Starbucks’ actions with another of its acquisitions, La Boulange, the Bay Area-based pastry chain picked up in 2012. The company indicated it planned to roll the chain out nationwide. In mid-2015, Starbucks announced it would close all 23 of the La Boulange locations, but would continue to serve La Boulange products in regular Starbucks stores.

According to a SFGate article from the time of that announcement, Starbucks’ year-over-year food sales were up 16 percent and breakfast items were up 35 percent.

Similarly, while Starbucks is turning away from the “tea bar” concept, Teavana tea itself has actually proven to be quite popular. The product recently saw a jump in sales according to the Puget Sound Business Journal. The Journal said that there has been a 12 percent spike in sales year-over-year for Teavana products, bringing in sales of nearly $1 billion.

Was it the right choice from a branding standpoint for Starbucks to jettison Teavana tea bars even as packaged tea products continue to become more popular in Starbucks locations? What other foodservice area could Starbucks expand into that would make for a “third space” similar to the Starbucks coffee chain?

Please practice The RetailWire Golden Rule when submitting your comments.
Braintrust
"Having been in the coffee business for many years I can tell you the tea bar concept was always the "next big thing.""

"I am not sure that the tea standalone concept is strong enough for a retail concept. Many people purchase tea, and many people order tea to be consumed at Starbucks."

I think Starbucks is smart to expand their offerings under their Starbucks brand and stores. Adding other food and beverages (including wine and beer) would add additional customers and higher average checks in more parts of the day. This makes more sense to me than building and staffing single-purpose stores.

Yes. Move the tea stuff to its own store and ramp up the pre-packed stuff. Tea drinkers are not the same as coffee people. The environment needs to be different and different foods map with team.

Tea stores as a separate location can help The ‘Bucks kill the overflow of Starbucks stores. Re-configure some stores to be 90 percent tea with coffee still available but in limited forms (Cold Brew is a seller), basic coffee, no lattes or sugar-piled kiddie drinks like Sugar-Packed Latte Forte with whipped cream and a cherry.

Having been in the coffee business for many years I can tell you the tea bar concept was always the “next big thing.” Lipton tried it in trendy Oldtown Pasadena in the ’80s and many people since have tried but it just isn’t the same socially as drinking coffee.

Teavana was never a social gathering, come have some tea and listen to music while surfing the net place. It was really a retail outlet, selling bulk tea and “tea ware.”

Starbucks already services the come sit and drink tea crowd who want to do that within the Starbucks “restaurant.” No surprise that tea bars as a separate restaurant didn’t take off.

I am not sure that the tea standalone concept is strong enough for a retail concept. Many people purchase tea, and many people order tea to be consumed at Starbucks. But those on-site tea consumers tend to associate with coffee lovers, I am guessing. An analysis of tea consumers at Starbucks can tell you what percent of purchasers also order coffee in the same order, and some on-site research can help identify consumers who are drinking tea and sitting with coffee drinkers.

A pure tea concept, or a tea concept with “ordinary” coffee, would fail these purchasers.

The logical next area, which Starbucks is already exploring, is evening drinks. It will be interesting to see if the Starbucks brand can extend beyond coffee-drinking hours.

While Teavana tea might be popular in and of itself, this move seems to make sense to separate the brands from a retail store perspective. Two different experiences and drinkers.

Yes. Starbucks needs to stick to coffee, community and chat (its core goals). There are still many areas for Starbucks to grow, ways to expand, and markets to appeal to. Continue to master these in light of their core competencies and Starbucks will continue to be successful.

I’m not surprised by these closings at all. Coffee drinkers outnumber tea drinkers 3-1 in the US, and as a result tea drinkers are use to going to Starbucks but not vice versa.

Yes. Tea is a reflective, personal item. It’s a wind-down-your-day item. It’s not like coffee, where it helps you get going and socialize. I’ve never said, “Let’s meet for tea”!

Closing the Teavana tea bars was not a commentary on the brand but rather on the concept.

350 Teavana retail stores selling packaged teas do well enough. Overall Starbucks tea sales are growing double digits in US and Canada. But the bar concept didn’t stick. Social tea consumption per capita is insufficiently high in North America, though it may be suitably large in Asian countries, where Starbucks continues to expand Teavana stores

As far as other categories, Starbucks may look to juice, which attracts an audience looking for more healthful choices. But again, looking at per capita consumption, juice may represent added selection in existing Starbucks rather than a viable standalone “bar” concept.

Braintrust
"Having been in the coffee business for many years I can tell you the tea bar concept was always the "next big thing.""

"I am not sure that the tea standalone concept is strong enough for a retail concept. Many people purchase tea, and many people order tea to be consumed at Starbucks."