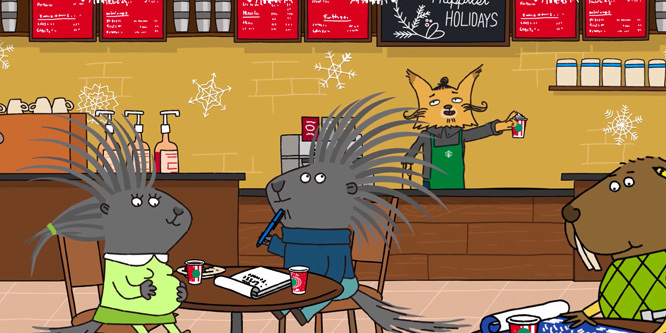 With its latest promotional/entertainment hybrid, Starbucks is debuting a cartoon web series aimed at younger Millennials by writers whose names Generation Xers will also recognize from credits of The Simpsons.

The series, 1st & Main, is set inside a Starbucks, as reported by TechCrunch. Episodes are based around the lives of a cast of anthropomorphic animals. Characters include a “hipster barista cat,” a “beagle working on her first novel” and other struggling artist tropes. Storylines are based on observations about the coffee vibe and culture that the three series writers experienced while working in their local Starbucks location. Each episode clocks in at 90 seconds or less.

The involvement of writers from The Simpsons indicates that 1st & Main is aiming for edgy wit. But how far Starbucks will allow them to go in a cartoon that has the Starbucks brand front and center remains to be seen. And viewers might be skeptical of a cartoon that is meant to double as an advertisement.

While struggling artists and other coffee shop regulars may be the Millennials that Starbucks hopes to court with 1st & Main, other recent moves by Starbucks aim at a different segment of the demographic.

Co-founder Howard Schultz, who is stepping out of his CEO role and into the executive chairman position in April, plans to oversee the launch of 1,000 Reserve brand stores, also designed to reach Millennials. The Reserve concept offers upscale items such as $10 cups of coffee and exotic packaged blends that run $50 for an eight-ounce bag. In a Reuters article, Ric Rhinehart, executive director of the Specialty Coffee Association of America, notes that Starbucks is “acutely aware” of its reputation as “the Millennials’ parents’ coffee house.”

Please practice The RetailWire Golden Rule when submitting your comments.
Braintrust
"Truth be told I’m not a Starbucks drinker, but I do get culture and I think this is spot on."

15 Comments on "Starbucks launches its own branded web cartoon"

Starbucks is not just any retailer, and 1st & Main does a great job of reinforcing that brand message. Unlike Starbucks, many retailers don’t have a core story. Starbucks is willing to have fun with its story, using these short videos to highlight its offerings and the interesting mix of characters that frequent its locations.

1st & Main probably wont take enough risks to appeal to Millennials. The branded element feels too eerie to me, and Starbucks will be too image-cautious to create a lot of value. The Simpsons is funny because it takes risks and addresses real topics, both of which 1st & Main won’t be able to replicate.

I feel like Starbucks should be paying me for watching that clip. Maybe some Millennials will play the series for their children, although I fail to see how that will dispense with the “your parents’ coffee shop” vibe.

Branded entertainment works when it feels authentic. Think Urban Decay’s Snapchat filter, which blew kisses in Vice lipstick colors. Evidently Starbucks is struggling to hit their stride with the hipster demographic, but this show is not the answer.

Truth be told I’m not a Starbucks drinker, but I do get culture and I think this is spot on. I hope the brand lets this web series get a little (or a lot) edgy and, what’s more, figure out a way to involve the intended audience in a few story lines. They will get closer to true engagement and building relationships if they get beyond the “broadcasting” mentality.

Whether or not it works is not ours to debate. Starbucks will know the answer earlier than any of us, which is the prize of intrepid innovators. Retailers who sit and wait to see are by definition already behind the curve — whether it works or not.

Well, first of all, listening to the video caused my Amazon Echo to add an ice coffee to my shopping list, so I wish they hadn’t used the name Alexa. Now, on to the question at hand. The web series is actually mocking Starbucks’ patronizing accommodation of Millennials’ pretentious behavior. So the question is, will the Millennials like to be the butt of the joke (with self-deprecation being SO hip) or will they bite the hand that pours that 137.623 degree half-caf, coconut water, almond milk Frappadappa with extra caramel sauce (and don’t forget to pass the cup in the air as an homage to Mother Gaia)? The fact is Starbucks is the craft beer of the coffee bean set, i.e., it allows those with a lack of knowledge a place to appear to be in-the-know. How many real coffee aficionados would add ingredients to their brew more generally applied to ice cream? Not too many. But Starbucks is full of hipsters asking for special blends of syrup to the bean of the season. So… Read more »
6
|
0
-   Share

Ryan, your comment is as hilarious as it is true. Perhaps Starbucks can recruit you to write more astutely hipster-deprecating content for their next venture.

It’s all about relevance and, in the case of Starbucks, they are trying to be more relevant to Millennials. I would not be surprised if some episodes take a swipe at the narrative offered by Ric Rhinehart, but in this case to try and change that perception.

I think the promotion of the brand is too blatant and the length is too long to appeal to young Millennials.

The retail infotainment media channel has too many branding possibilities to be overlooked. There is a reason that many retailers have put their online social media channels in place, with many taking the early steps with in-store digital media.

People love stories and animated content can deliver a moment of joy, add character to a brand, build aspirations, inform and entertain while adding ambiance and vitality to the brand. Reducing perceived waiting and dwell times are the icing on the branding and merchandising cakes. Marketing meets selling with in-store media.

Consumers generally appreciate it when a brand is brought to life and given some personality. This series may achieve that, however it may also appeal more to Generation Z (Post-Millennials born since 1995), which is possibly what Starbucks need to be as focused on, if not more focused on, anyway. Anyway, it’s fun and if Starbucks allows the writers to go where they need to go with this and not be too protective, it may just work.

The goal is to connect with customers at a level that fosters some emotion and a sense of inclusion. They need to connect with a new generation of coffee drinkers. If it works, I’m sure we’ll see more of the same. Starbucks is not just a successful brand, they are now woven into the fabric of our culture. To sustain that, they must remain relevant to up-and-coming loyal customers.

What is this? Is it a pre-program for the toys you can soon buy at Starbucks? Really — the target market is younger than Generation Z. My read is that it is a stupid hit on a strong brand. Why animals? This makes no sense.

Having watched companies fall in love with the idea that entertaining content was important, I’m highly skeptical of the value of this effort. Sounds like someone sold a concept to make this and I fully expect it to disappear after about 6 months.

It won’t damage Starbucks because they are well off enough to dabble in a lot of experimental efforts even if they are extremely unlikely to drive any value. The danger is that other companies, lacking the deep pockets, might come to believe these are good commercial efforts. In my experience, they aren’t effective at driving anything other than a small brand addition (that Starbucks wouldn’t notice if they hadn’t done it).

So my advice? Good for Starbucks. But don’t copy them.

The clip did nothing for me. But the idea of Starbucks going out of their comfort zone is appealing. They will know soon enough how to tweak the characters and message to focus on how to make it as appealing as they can to the vast audience. No matter what happens Starbucks will lose no business from this. The question remains, will it attract new customers?

Maybe I am slouching toward being a grumpy old man, but … this “entertainment” is for people with too much time on their hands.

Braintrust
"Truth be told I’m not a Starbucks drinker, but I do get culture and I think this is spot on."