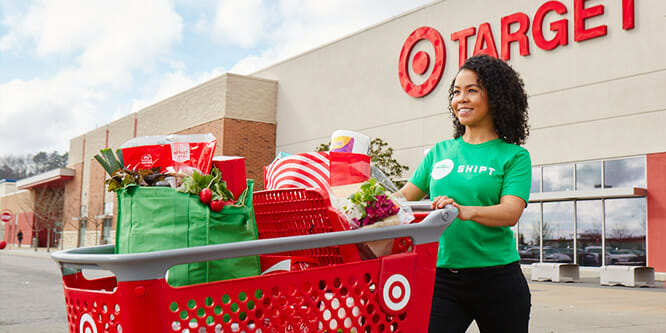 Target CEO Brian Cornell headed into the 2017 Christmas selling season confident that the company’s stores were “better prepared” to meet the demands of consumers than ever before. Target as it turns out posted a 3.4 percent increase in same-store sales during the holidays and continued a trend of improving comps for the year, and so it appears Mr. Cornell’s optimism was not misplaced.

On the company’s third quarter earnings call in November, which was ahead of Target’s announced acquisition of Shipt, Mr. Cornell pointed to a number of steps Target has taken to build traffic and sales momentum in its stores and online. Among these were the introduction of popular new private labels, lower everyday prices, store remodels, the rollout of new smaller stores, expansion of ship-from-store services, employee pay and training initiatives, curbside and in-store pickup as well as same-day delivery. Mr. Cornell also pointed to the efforts the company has made to revamp its supply chain as key to its performance.

Target’s CEO visited CNBC’s “Squawk Box” ahead of next week’s earnings report. Mr. Cornell pointed to positive growth in all the chain’s major categories and across all geographies as reasons for continued optimism. While a lot of attention has been paid to Target’s online performance — the retailer has had four years of positive comps — Mr. Cornell pointed out that the combination of physical stores and digital operations is driving the chain’s recent success.

“We continue to see great traction in both our physical and digital performance. It’s a blend of both and I think the winning retailers in the future are going to combine a great physical asset and physical experience with the ease that comes along with that digital interaction. … We want to make it really easy to shop at Target,” he said.

Asked about the Shipt same-day delivery acquisition, Mr. Cornell said it was “only one of the tools” that Target is employing to upgrade its consumer fulfillment capabilities. He pointed to standard home delivery of online orders, a planned expansion to other markets of a drive-up service test conducted in Minneapolis and the use of the transportation tech company, Grand Junction, in New York City to enable shoppers buying in stores to have their purchases delivered.

DISCUSSION QUESTIONS: What elements of Target’s strategy give you the greatest cause for hope or concern about the retailer’s prospects going forward? Do you see the chain’s best opportunities for growth being organic or should Target make further acquisitions in light of moves being made by Amazon, Walmart and others?

Please practice The RetailWire Golden Rule when submitting your comments.
Braintrust
"Target’s new stores and their refurbishments are a solid step forward."

"Target’s strength is in its positioning with the focus on selection of great private labels and exclusive brands they collaborate with."

"What gives me hope is the holistic approach of Target. They are moving the business forward on many fronts, keeping in step with the market."

Target’s results speak for themselves. As noted, Target is advancing their business on many fronts. I don’t think it’s any one or even a few that are giving me hope, but rather the overall, balanced approach management is taking to applying strategies across all parts of their business more holistically. In an enterprise the size of Target, growth will not be an either/or proposition – organic and acquisition will both be important as it finds its place among the leaders driving the industry.

I have been and remain very impressed with Brian Cornell’s leadership and vision for Target. His strategy is working. The solution for brick-and-mortar is finding the balance between digital conveniences and the in-store experience. Mr. Cornell sees that, understands it and has developed a plan that is building a successful all-around customer experience. He has addressed all the customer demands including same-day delivery buy online and pick up in-store along with more private label products. He is keeping Target stores on track with today’s needs, remodeling old stores and continues to create new store designs and concepts. So I see Target remaining successful and look forward to what Mr. Cornell introduces next. Many of today’s retailers could learn a lot from Target’s leadership.

There’s no magic bullet to retail success. Target is doing the right thing by combining tactics and not betting too heavily on any one factor to determine its future. Going forward it will need a smattering of continuous improvement, innovation, listening to customer wants/needs, and if applicable, acquisitions that move them forward faster than homegrown efforts–just like every other retailer.

Given his CPG background, I give Mr. Cornell credit for recognizing at the outset that Target’s real niche is “cheap chic” apparel and home goods. This is what the brand was built on, not groceries and commodities. While these categories will continue to be important in-store and online, Target’s destiny doesn’t depend on them. The new brands’ product development didn’t happen overnight, but the strategy is beginning to pay off.

I wholeheartedly agree with Brian Cornell.

Target’s new stores and their refurbishments are a solid step forward and the same-store sales numbers from these shops are very positive.

However, Target doesn’t entirely practice what Mr. Cornell preaches. For example, even in new shops, in-store merchandising is poor and uninspirational. Online prices for products collected from Target’s small stores are cheaper than buying the product in that same store. Out-of-stocks remain a massive issue across the entire estate. And so the list goes on.

Target is definitely going in the right direction, but it still has a lot of work to do!

Yes, Neil, out-of-stocks have been and continue to be a big issue for Target. They are moving in the right direction with a greater focus, once again, on cheap chic and home goods but the out-of-stocks do get in the way of success. I am certain Mr. Cornell has his finger on that so we will have to wait and see. For my 2 cents.

Target fulfilled 70 percent of its holiday orders from store inventory in 2017 — a period during which sales grew more than 50 percent. If Target can build upon that and couple it with Shipt’s ability to pick orders up in-store and deliver the same day, Target could have a clear differentiator over the rest of retail. Execution will be extremely difficult and will require perseverance, but if immediacy matters to consumers (it’s still unclear if this is indeed the case) Target could be poised to make a mark in the omnichannel landscape.

The strongest elements of Target’s growth have been smaller stores and online. Target finally developed an e-commerce strategy that could compete with Amazon and Walmart. At the same time that Walmart’s same-store sales were slipping, Target’s were growing. While all of this was happening, the overall economy was improving and cheap chic was in vogue again.

Target’s strength is in its positioning with the focus on selection of great private labels and exclusive brands they collaborate with. They deliver unique product offerings that are not found elsewhere at another retailer. Additionally, their continued investment in online is allowing them to stay in competition with other retailers like Amazon and Walmart.

What gives me hope is the holistic approach of Target. They are moving the business forward on many fronts, keeping in step with the market requirements. This positions them well should they choose to go for more acquisitions. Organic is also performing nicely. A lot of mature retailers run the business as cash cows, investing only in short-term patches and to plug revenue or margin short falls. The Target approach is a lesson for many — it shows there is another way.

At the front doors of Target stores, in just the past few weeks signs have appeared offering new low prices. Merchandise mix is shifting back to why Target became successful in the first place. Target is the new place for great apparel for women, teens and girls! Talk about cute clothes. Reminds me of the early days of Nordstrom when trend and fashion resulted in “fun fashion” and the thrill of shopping. How often today does this happen? Finding something you love! Target associates say they can’t keep the merchandise in, it sells so fast. Apply this to home, men’s, housewares, etc. Target is and will continue killing it if they continue with their rapid response, stunning execution and great fashion! Shoppers are hungry for Target.

Success in retail today is to have multiple initiatives going on addressing various parts of the consumer buying journey. The combination of refreshing the stores, online and mobile initiatives and improved fulfillment is what it takes in combination to compete in the future.

Target is doing a lot of smart things to remain competitive in one of the toughest segments of retail. However, they are faced with serious competition from Amazon and Walmart for every commodity product they sell – and winning isn’t easy. For commodity products, available at many other chains, the best approach is to keep prices competitive and outperform the competition on customer service and convenience. Making the buying process easy and frictionless is key, including finding the right product, fast checkout, and flexible and fast delivery or pick-up options. Target stores have a more appealing look to shoppers so they have that advantage, if they can match price on commodity items and delivery options they are perfectly positioned.

My biggest hope — really cause for optimism — is that the comments indicate Target is working on “getting the little things right,” like out-of-stocks, pricing, cyber security, etc. (Although of course they really aren’t so little), rather than embarking on grandiose strategies that end up being poorly executed disasters (Canada).

Ultimately, though, that’s also my cause for concern as well: you can’t avoid “big ideas” forever … you just have to find the right one. “Cheap chic” was their initial road to success. We’ll have to see what the next one will be.

Brian Cornell is building out a solid foundation for Target’s continued growth. Instead of just rushing to compete with the likes of Walmart and Amazon, they are developing their own bread and butter offerings. With hit clothing lines and releases, small format stores in urban areas, and a focus on boosting customer experience across channels — Cornell is really on to something here.

Braintrust
"Target’s new stores and their refurbishments are a solid step forward."

"Target’s strength is in its positioning with the focus on selection of great private labels and exclusive brands they collaborate with."

"What gives me hope is the holistic approach of Target. They are moving the business forward on many fronts, keeping in step with the market."