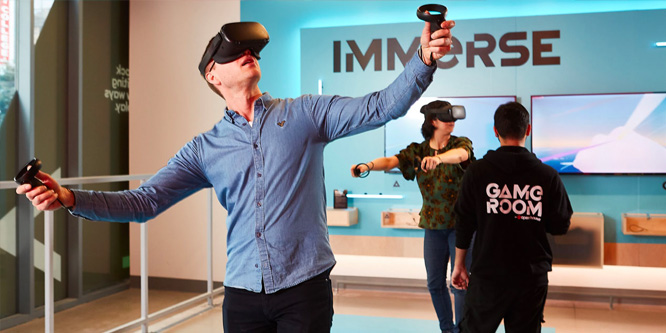 A few years ago, Target launched a store specifically to showcase its connected home offerings. Now, it has converted the IoT-focused Target Open House into a new concept store specifically for techies of a different type — the next generation of video game fanatics.

The new concept, called The Game Room, had its soft launch last week in San Francisco, according to the gaming website, Protocol. The store features areas to try out PC gaming consoles, virtual reality and augmented reality headsets, and connectivity to Google and Apple’s cloud-based gaming services on in-store devices, as well as guidance on how to utilize those services. The current offerings on display in the location, situated in one of the nation’s tech industry hubs, are distinct from what is currently available at Target stores nationwide, which tend to stock traditional physical gaming media.

That could change as Target learns from the way customers take advantage of what’s offered at The Game Room and expands some of its features into the chain’s mainline concepts. The retailer could potentially spin out more locations of The Game Room nationwide (though the IoT Open House remained a one-store flagship).

The Target Open House website has been revamped to promote “Game Room at Target Open House.” The site currently features images of people using the gaming hardware, promises upcoming events and solicits partnerships from established vendors and startups in the space.

The new concept comes as the video gaming space continues to change. As console gamers are increasingly able to download full physical games or subscribe to online gaming services rather than buying cartridges or discs, sales of physical media have experienced a downturn.

Niche brick-and-mortar retailers more directly tied to the video game world than Target have likewise been trying to appeal to the evolving gamer lifestyle in order to remain relevant.

Struggling retailer GameStop, for instance, announced the pilot of a store concept focused on providing a place for taking part in e-sports competitions, trying out games in-store and, in some iterations of the new concept, playing classic “retro” arcade and console games.

DISCUSSION QUESTIONS: Does it make sense for Target to launch a video gaming-oriented concept in the Open House location? Can you see Target expanding this concept beyond a single store or should it be used solely as a testing ground for existing Target locations?

Please practice The RetailWire Golden Rule when submitting your comments.
Braintrust
"Target is embracing the desire for consumers to have hands-on, entertaining experiences when they shop while 'targeting' a lucrative demographic – sounds like a win."

"Target’s concept store may be the only way for it to make a statement in the gaming space, yet it will be difficult to scale any positive impressions from one location."

"Target has the resources to be successful with this as long as they keep it separate from their current business. It is a new and vibrant opportunity."

Target is embracing the desire for consumers to have hands-on, entertaining experiences when they shop while “targeting” a lucrative demographic – sounds like a win.

Target’s concept store may be the only way for it to make a statement in the gaming space, yet it will be difficult to scale any positive impressions from one location. The coronavirus scare further limits the very scenarios that would make this concept successful (shared public experiences — and surfaces). Headwinds are at gale force on this one, at least for now.

I see this as Target trying out a few things – which is good. It is positioned as well as anyone else to be the go-to gaming destination. GameStop and Best Buy are the competition that come to mind first. But GameStop has very small footprint stores, and Best Buy could be doing this as well. These are the kind of retail experiences that make a visit to the store worth the time and effort.

The emergence of e-sports should be taken seriously. Creating a destination to serve this enthusiastic community is compelling. Creating an environment where people are sharing headsets, visors, and gaming controllers in the face of the COVID-19 pandemic may not be the best time to explore this concept. Everything may be virtual, except your health.

Innovation and experimentation is the name of the game, and Target is spot on for driving outstanding customer experiences within their new concept store. However there is caution in the air with the coronavirus, as it will impact all customer-facing and service-oriented businesses for the foreseeable future. Regardless, the lines between our digital and physical worlds have been blurring for years, and Target is taking a very wise and strategic move to address what could be a very lucrative long term opportunity.

Why isn’t GameStop testing this? They need something to get people into their stores.

It makes sense in terms of studying how customers interact with AR., VR, etc. and building “street cred” with younger shoppers. Past that, not much. If I were Target I would maybe add a second or third test store to evaluate different demographics (say urban/suburban/rural), but that would be it. Having lots of gamers loitering about isn’t really all that brand compliant of you think about it.

I really like this. That is, if it is a test and possibly an eventual roll-out of Game Room. E-sports are a huge trend.

But please, Target, do not see it as an adjunct to the Target stores or the “target” brand. That will kill it. Target has the resources to be successful with this as long as they keep it separate from their current business. It is a new and vibrant opportunity.

This looks to be another smart move by Target. They should take care not to expand this idea everywhere — there will be many stores where it doesn’t return enough for the cost.

On the other hand, to learn how to better sell games? Absolutely worth the investment. Good to see.

It’s a great test and concept for Target to experiment with. I don’t see this as something that will find its way into every Target store any more than the original Target Open House did with IoT (although I am surprised we didn’t see some aspects of that spread to Target’s electronics dept in a way that would compete more directly with Best Buy). It’s a great expression of experiential retail for gamers, but with the coronavirus headwinds looming larger, it could be a risky proposition to expand. For now, I expect Target to learn from this single location and determine later how to apply it. One thing I am seeing from this and everything else we’ve heard recently from Target is that they have fully embraced the idea that Target the brand can represent many things to different customer segments and not every Target location has to provide everything. It’s a refreshing take on the “Everything Store” concept that is quite different from Amazon or Walmart. Now if they would just test their own… Read more »
0
|
0
-   Share

Braintrust
"Target is embracing the desire for consumers to have hands-on, entertaining experiences when they shop while 'targeting' a lucrative demographic – sounds like a win."

"Target’s concept store may be the only way for it to make a statement in the gaming space, yet it will be difficult to scale any positive impressions from one location."

"Target has the resources to be successful with this as long as they keep it separate from their current business. It is a new and vibrant opportunity."