Can GameStop become the go-to place for the gaming lifestyle? 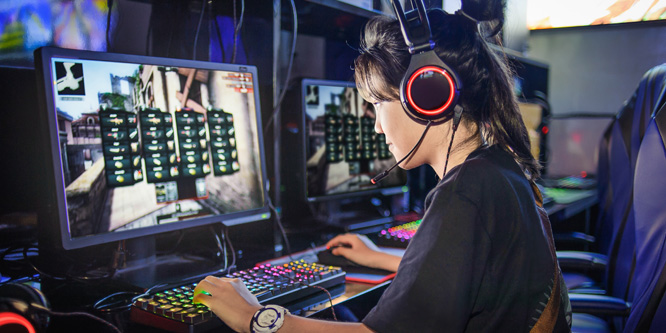 Video games are the latest form of once-exclusively physical media being disrupted by digital downloads. In efforts to adapt, GameStop, a brick-and-mortar chain largely reliant on physical game sales, is now piloting a store redesign to make the in-store experience as much about the gaming lifestyle as the games themselves.

The pilot stores will offer new ways for visitors to try out games, in-store e-sports competitions and a special separate store concept catering entirely to retro gaming and classic consoles, according to Engadget.

GameStop’s performance is currently in the doldrums due to a combination of slowing physical game purchases and a current gap in the release of popular physical consoles. Stores that specialize in physical media were some of the earliest and hardest hit by the advent of e-commerce, but recent trends have begun to demonstrate a path forward for this type of retail, if perhaps on a smaller scale.

For instance, as mass retail record and CD stores largely disappeared from the U.S. retail landscape, mom-and-pops remained and even experienced enhanced interest since the mid-’00s with industry-supported events such as Record Store Day catering to the collector market.

Likewise, the one-two punch of Amazon in its initial incarnation as a low-priced online bookseller and the advent of e-readers put most of the dominant big box booksellers of the late-’90s out of business. A rebound in interest in physical books since the 2009 low point, however, has led to the proliferation of experience-focused indie booksellers, with Barnes & Noble left as the big remaining chain struggling to find its place.

Rethinking brick-and-mortar stores as lifestyle destinations for serious fans and collectors hasn’t been restricted to mom-and-pops, though. In the sneaker world, Nike and Foot Locker have both launched stores focused on cultural activities that fit the lifestyle of fanatical “sneakerheads.”

GameStop’s attempt at brick-and-mortar reinvention comes at the same time when it is closing ThinkGeek.com, which sells fandom-focused licensed products, according to TechCrunch. ThinkGeek’s 40 standalone brick-and-mortar stores, however, will remain open and the brand will have a new presence in GameStop stores.

ThinkGeek was originally an e-tail only outfit acquired by GameStop in 2015. GameStop gave the chain a brick-and-mortar presence shortly after the acquisition.

DISCUSSION QUESTIONS: Will a rethinking of its brick-and-mortar stores allow GameStop to remain relevant as customers increasingly download games than buy physical copies? How might the chain make this initiative a success?

Please practice The RetailWire Golden Rule when submitting your comments.
Braintrust
"Imagine the publicity when tournaments take place -- it's GameStop's own version of Prime Days."

"While GameStop certainly should be trying new approaches with their brick-and-mortar stores, they would be unwise to only focus on their distribution..."

"In my view, GameStop is on a slippery slope and I only see a downward slide for the business, even if it does manage to survive in some form."

7 Comments on "Can GameStop become the go-to place for the gaming lifestyle?"

Re-thinking their physical stores is a good starting point, but it’s only a start. The bigger systemic change and threat to GameStop is publishers selling games online direct to consumers. Cutting out the need for a visit to the store entirely is very problematic, and potentially poses an existential threat to GameStop.

But here’s why I still have hope: 1.) GameStop has a significant physical store footprint, ~4,000 stores in north America; 2.) the used game market is still active and GameStop is the clear leader and, finally, 3.) the gaming community is strong and growing, especially is terms of organized gaming competitions, including at the collegiate level. The fact is, GameStop is in a very tough spot. And while the deck is stacked against them, there’s still a chance they can turn this around – focusing on their stores is a good start.

Mark, your third point is critical – “the community is strong and growing.” And if I may add, “and changing.” While GameStop certainly should be trying new approaches with their brick-and-mortar stores, they would be unwise to only focus on their distribution as a means to sustain business. If they are to exist in five years, there will need to be a more fundamental evolution to the services they provide.

Good point, Evan. I agree. The physical stores are just one piece of the puzzle. Online is where the gaming industry is going – streaming is the future and the recent launch of Google’s Stadia gaming platform is evidence of that. First and foremost, GameStop must find a way to lead in online gaming and then find new ways to utilize their considerable store footprint to enhance their position through new services and offerings that online only competitors cannot. This will not be easy to do.

Yes! Physical store locations are the key to retail success going forward. Leveraging them in exciting ways is the best road forward to burnishing the brand and driving sales. Imagine the publicity when tournaments take place — it’s GameStop’s own version of Prime Days.

With faster connection speeds, especially with the rollout of 5G, downloading games or the direct streaming of games is going to become much more common. That’s a major threat to GameStop and completely disrupts its core business in the same way Blockbuster was disrupted by the advent of online movies.

There is a gaming community and making stores a focal point for them may work, especially if there are social aspects and game-related merchandise they can buy. However, I still have my doubts: many in the gaming community prefer interacting virtually rather than in person. That makes the business very reliant on game-related merchandise and I wonder if there is enough demand here to sustain a chain like GameStop.

In my view, GameStop is on a slippery slope and I only see a downward slide for the business, even if it does manage to survive in some form.

GameStop may want to explore some outside-the-box ideas like targeting Baby Boomers who played video games when they were young. Boomers are looking for fun ways to maintain their cognitive ability with mental exercise games. Most that I’ve tried are OK, but not very entertaining. But playing video games is fun and has been shown to promote brain functioning. Choosing to demo games that are easy to learn or even throwbacks like Centipede, Donkey Kong or Battle Tanks may entice a whole new and large demographic into their stores.

Braintrust
"Imagine the publicity when tournaments take place -- it's GameStop's own version of Prime Days."

"While GameStop certainly should be trying new approaches with their brick-and-mortar stores, they would be unwise to only focus on their distribution..."

"In my view, GameStop is on a slippery slope and I only see a downward slide for the business, even if it does manage to survive in some form."