The ‘McDonald’s of the Future’ leans fast-casual 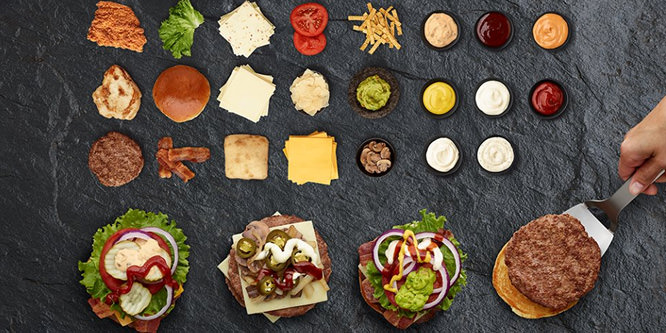 Since last year’s announcement of a turnaround plan, McDonald’s changes and upgrades seem to have grown in scope with each subsequent move. The initiatives started with organizational restructuring and small tweaks. Then the chain made its breakfast menu available all day. Now the biggest change of all may be on its way, if McDonald’s follows the lead of one of its U.S. franchisees.

Earlier in the month, a concept being billed as the “McDonald’s of the Future” opened in St. Joseph, Mo. The Kansas City Star reported that the location features touchscreen kiosk ordering, customizable burgers with toppings available such a guacamole and maple bacon, a dessert bar and table service. The location also features a digitally-enhanced interactive play area with a three-story play place. For a limited time, the restaurant is offering unlimited French fries with orders.

With this new McDonald’s concept, the chain appears to be dipping its toe in the water of the rapidly growing fast-casual dining space.

The company has also experimented with upscale burgers in a limited number of U.S. locations. According to BurgerBusiness, McDonald’s tested a line of “Signature Crafted” burgers with a selection of premium topping bundles in some locations in western Washington State. The chain has also courted audiences with regionalized products. In June, McDonald’s ran a “McBurger Showdown” contest in Texas soliciting ideas for a burger that would represent the Lone Star State, Delish reported. The winner, named a Lone Star Stack, is a double cheeseburger served on Texas Toast.

At the same time, the chain is making moves to cater to more health-conscious consumers. Reuters reported that McDonald’s will be replacing high-fructose corn syrup in their buns with real sugar this month, and has removed antibiotics from its chicken.

DISCUSSION QUESTIONS: Can McDonald’s succeed in reinventing itself as a fast-casual restaurant in the U.S.? Should McDonald’s keep its traditional fast food restaurant alongside a broader rollout of the fast-casual concept?

Please practice The RetailWire Golden Rule when submitting your comments.
Braintrust
"Fast-casual is considered a foodservice category but, more importantly, it is a consumer experience."

"They are giving their customers what they want."

McDonald’s has done a wonderful job of listening to their customers in the past. The all-day breakfast proves that. They are giving their customers what they want. Today’s customer is different from the one 10 years ago — or even from last century (which wasn’t that long ago) when McDonald’s had much of its growth. There will most likely always be a place for a Big Mac and those delicious fries, and I doubt they will eliminate those and other savory items from the menu. Yet McDonald’s knows their offering of healthy choices will appeal to a broader base of customers.

Fast-casual is considered a foodservice category but, more importantly, it is a consumer experience.

Beyond the fuel and fluid, sustenance can and should be fun, recuperative and restorative.

If the needs of a consumer at any given time, be they fast, convenient or casual can be met by good establishment design and layout, a wider range of patron needs can be met and the brand also benefits.

Lounge areas in a mall or co-shopper seating in fashion retail offer big lessons to all customer-facing categories. Serve the customer — make visitors want to be visitors. Foot traffic, revisit frequency and conversion depend on it.

I think McDonald’s doing this will be fun to try once but I don’t go there for $6 hamburgers. I want to get the $1 cheeseburger and be on my way. A fast-casual atmosphere it will never be. It’s fine for 80-year-old people nursing their coffee for three hours. Or teenagers sitting around all day and everyday only for the free Wi-Fi, lost in their headphones. The filthy store conditions, minimum wage employees and the loiterers make this not the place you want to eat a $6 hamburger.

Too little, too late. After spending more than 30 years value engineering every “P” of that brand and focusing primarily on price vs. quality, so much damage has been done that it’s an impossible dream in my opinion. Sure, you can have great PR pieces and gussy up a market or two, but we’re talking about thousands and thousands of units and millions and millions of impressions that have already been made. This is a massive rocket ship that’s been headed pell-mell in the same direction for a long time and trying to take a 90 degree turn is going to take a lot more than a few cool prototypes.

A sub-brand has a shot, but that’s not going to move the billion dollar needle. Would’ve been great if the McDonald’s execs in the ’80s would’ve listened to Warren Buffett when he said, “price is what you pay, value is what you get.”

I think McDonald’s is trying to become more mainstream, and for some, it will be well received. My problem, as well as many of my friends, is that their food simply isn’t very good, or healthy, and the menu is limited. If I want a great burger, this isn’t the place as other chains have upped the ante with much better burgers, and yes I’m willing to pay more for something I will enjoy eating.

Aside from my generation, McDonald’s is heading in the right direction, as they have been pushed into making their food with healthier ingredients. The kiosks are going to trim down their labor factor, as the $15 hour group will not stop until they get what they want. The future of fast food is not as bright as it once was, but McDonald’s is trying to keep their core audience, and this is a good start for them.

As Lyle stated, the move to fast casual is more than seeking a new foodservice classification, it is a fundamental change in the business model.

Some examples: McDonald’s has been shrinking its stores as the shift to drive-thru lessened the need for table space. This concept requires more space. The ability to customize the order, i.e. MTO, means a slower ordering and longer prep times. This impacts queuing as customers pay and/or wait for their items to be delivered. The list of changes required is long.

None of this means McDonald’s should not pursue changes in its business model, but it does mean that making these types of changes to its existing network would be a long, slow, and costly process, and one that its franchisees may resists.

It will be interesting to follow whether McDonald’s will manage to make the change from a $1 burger-cost strategy to $6 customized burger-differentiation strategy. It would be sad so see if it fails hard while trying to chase after both!

I wish them well, but how many changes can a format undergo before it’s no longer that format? Maybe McD’s will eventually morph into a yogurt shop or something similar, but at some point along the way it will no longer be relevant to whatever niche — in this case I guess it’s “fast food restaurant” — it once was.

Braintrust
"Fast-casual is considered a foodservice category but, more importantly, it is a consumer experience."

"They are giving their customers what they want."