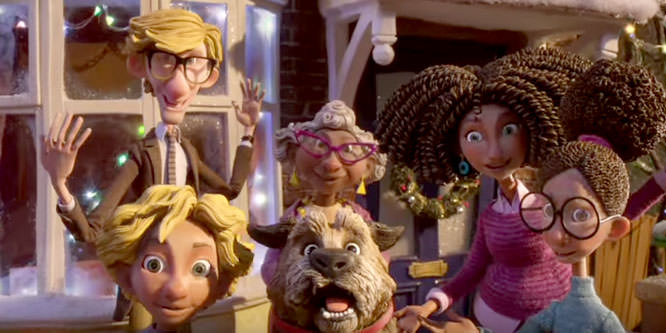 The Super Bowl marks the biggest annual advertising event in the U.S. In the U.K. and some other countries, that distinction goes to Christmas. That has long been given as the reason why retailers in places like England and Germany produce some of the best spots advertising has to offer at this time of year.

In year two of RetailWire’s Christmas Commercial Challenge Global Edition, we’ll share with you some of the best spots produced outside of the U.S. and give you the opportunity to choose a winner. We begin this year’s contest with commercials from two of Britain’s most well known chains — Marks & Spencer and Sainsbury’s — that together have generated more than 19.5 million views and 45,000 likes on YouTube since being uploaded last month.

The Marks & Spencer ad contains a modern portrayal of Mrs. Claus. No longer the dowdy matron whose primary responsibility is to keep Santa supplied with a steady stream of cookies and milk, the Marks & Spencer version is a full partner with her husband. In the spot, it is Mrs. Claus who rescues Christmas for a young boy who demonstrates an understanding of the adage that it is better to give than to receive.

The Sainsbury’s spot is an animated musical featuring vocals by James Corden, actor and host of The Late Late Show, in which the main character, Dave, comes to understand that the greatest gift he can give his family for Christmas is himself.

DISCUSSION QUESTIONS: What is your critique of Marks & Spencer’s “Mrs. Claus” and Sainsbury’s “Greatest Gift”? Which do you think is the more effective of the two? Would these spots work for a U.S. retailer if presented to a U.S. audience?

"I found it interesting that the Sainsbury’s spot stressed what a hassle in-store holiday shopping is."

Both spots were very entertaining and well done, however I am not sure what the Sainsbury’s ad said about Sainsbury’s. The Marks & Spencer ad didn’t have a lot more to say about them either but the ad was great and certainly left a good feeling about the brand.

So my 2 cents goes to Marks & Spencer!

The British are sentimental and never more so than when it comes to Christmas. The festive season evokes warmth, family, kids, times gone by, innocence … and spending lots of money. That’s why we love the videos and why retailers spend so much money on them — because they get us in the mood for this season and prepare us for this annual fest of buying. In no other country is there any similar phenomenon — our closest neighbor in terms of consumerism is the U.S. and the Macy’s Christmas advert is currently showing 67,000 views compared to the 20+ million for Buster the Boxer, the leading advertisement by John Lewis. Retailers run the risk of a PR backfire — this year John Lewis has received a flurry of criticism from parents who say that this year’s advertisement will stop children from believing in Father Christmas (“why does the father put up the trampoline and not Father Christmas?”) and wildlife charities (“we rescue hundreds of wild animals caught in netting in people’s gardens”). The number… Read more »
3
|
0
-   Share

Marks & Spencer juxtaposed a heartwarming story with an absolutely stunning rotating wardrobe. It was genius how Mrs. Claus had a bright red wardrobe, both matching Santa and grabbing the eye. I am interested in Marks & Spencer as a brand after watching this.

The resolution in Sainsbury’s spot was confusing. Did the gentleman succeed in creating a miniature dog clone of himself? I’m not sure what they’re selling based on the commercial. What can I purchase to get the magic here?

I found it interesting that the Sainsbury’s spot stressed what a hassle in-store holiday shopping is. It probably correctly enumerated all the frustrations associated with the holiday period and, of course, ends with a positive — if oddly egocentric — message. The Marks & Spencer spot on the other hand was entertaining, poked fun at paternalism and was clever in subtle ways — like Ms. Claus reading “Fifty Shades of Red.” So while they both worked — and worked better than many U.S. spots — I’d go with Marks & Spencer.

Both are excellent storytelling. So they are fundamentally a decent starting point for making an impact. Yet neither offers much reason to care about the store they advertise. The Sainsbury’s ad is a bit better at offering something that matters. Fundamentally, though, I would need to know more about the campaigns to evaluate them. These are each roughly three minutes in length. If that is targeting web video then I’d suggest they’re entirely ineffective. So there must be shorter cut downs. Only a very tiny number of people will spend three minutes on an ad on the web. But shortened and put in a linear TV campaign, what impact would they have? Hard to know. While both have great storytelling and spirit, I didn’t see enough brand connection in either to expect either to be a good foundation for a holiday campaign. My concern is that consultants have pitched us far too heavily on storytelling and these seem to be there. But the only storytelling that matters isn’t a general story — but the human… Read more »
1
|
0
-   Share

These spots could work anywhere. I prefer the Marks & Spencer spot for conveying the spirit of the holiday. While the message of the Sainsbury’s ad rings true, I don’t see how it ties into the store’s brand.

I love them both — but Marks & Spencer wins. I always knew that there was a great woman (not to mention elves) behind Santa Claus!

Without a doubt, these are two great commercials. The story line and production are top shelf. Americans must understand that Europeans are not as direct as Americans. In the United Kingdom, much of television is commercial free and consumers pay a fee. Commercial television is relatively new like our cable television, and there’s satellite.

Knowing both companies the choice is difficult. Both only name their sponsorship at the end so no direct selling. Personally I liked Mrs. Clause by Marks & Spencer.

These aren’t commercials, they’re miniseries … a point I bring up not just for levity, but also to point out the shortcoming (in both of them): they make little or no connection to the brand despite — or is it because of? — their length.

On points, M&S probably communicates better the idea of “get something here and give it to someone,” while I personally like the animation of the Sainsbury spot. But as with the election last month, my ballot will be unmarked.

Well, the Marks & Spencer ad is the best ad ever, so it’s not really a contest. But other than that, the Sainsbury ad takes way too long to get the point across and even though the point is excellent, I’m not sure I could ever tie a retailer in with that notion. Sorry, but I know you’re trying to sell me something so, get on with it please.

I have seen “Mrs. Claus” several times before. I like the simplicity of the way it is delivered. It gave me the holiday spirit. I did notice these two are longer than the ones we usually watch.

The second ad did little for me. If I did not have to watch it for this, I would have cut it off minutes before it ended.

Marks & Spencer’s ad, a highly entertaining journey, only troubles me because delightful Mrs. Claus has to be secretive about her abilities (so as not to threaten Mr. Claus’ alpha position?). It also doesn’t really lead you to Marks & Spencer for your Christmas shopping, unless you are interested in buying or replacing some sneakers.

I love both spots- British adverts are never really direct (price point and item) but more to evoke emotion and tell a story about the holiday. This round I would pick M&S. I would also give credit to a few other British adverts that are very good this year — Lidl and John Lewis (I love this one!).

"I found it interesting that the Sainsbury’s spot stressed what a hassle in-store holiday shopping is."