Tim Hortons cooks up a test for plant-based eggs 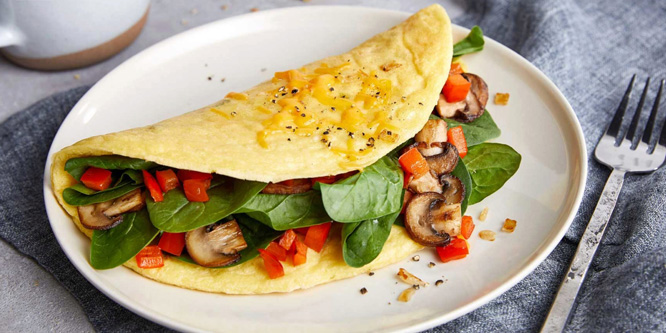 Meatless, or plant-based, burgers and chicken substitutes have grabbed a lot of headline space lately. Non-animal sources for other sources of protein are also making in-roads in retail and foodservice. The latest case in point is the announced pilot of a plant-based egg alternative at Tim Hortons’ locations in Canada.

The chain is testing a product made by JUST, which incorporates among other non-animal ingredients mung bean protein and turmeric to approximate the look, feel and taste of real eggs.

The test is not the first plant-based foray for Tim Hortons. The chain previously added the Beyond Burger and Beyond BBQ Burger to its menu. Those items are made by Beyond Meat, which has seen its stock price rise over 700 percent since it launched its initial public offering in May.

In a press statement, Tim Hortons spokesperson Jane Almeida told CNBC that the chain is always testing new products to meet the needs of its customers. “As we continue to test and get feedback, we will consider expanding plant-based options into other menu items,” she said.

While only about seven percent of the U.S. population identifies as vegetarian or vegan, there is a belief that more consumers will continue to transition to non-animal forms of protein for health, environmental and/or economic reasons. Barclays, Business Insider reports, believes that plant-based meat alternatives will grow from its current size, $14 billion, to $140 billion over the next decade.

Please practice The RetailWire Golden Rule when submitting your comments.
Braintrust
"The selection of amazing plant-based products available in the market is truly exciting. "

"The hottest trend these days are plant-based products that are developed in a laboratory."

"If the taste is right, people will turn to plant-based alternatives for at least a portion of their protein needs both at home and at restaurants."

There is an explosion in the number of plant-based products. This is no bad thing as it increases choice for vegans and vegetarians and others wanting to cut back on animal products. In that sense, it helps restaurants expand their audiences and sales. That said, it does add to menu complexity. I also wonder how great some of these products are. Some plant-based products are highly processed and are nowhere near as “natural” as their animal-based alternatives.

With respect, how “natural” is it to artificially create sentient beings in the millions for our consumption when kind and planet-friendly alternatives are readily available? You hear the “franken-food” push back on plant-based products (which have to be labeled unlike those packages of raw meat/chicken/fish), inviting scrutiny that isn’t applied to the
meat industry. The standard is franken-animals that have been modified to fatten up at an accelerated pace, in horrible conditions, separated from their families then cruelly killed. Such a baffling argument (that I’m not assigning to you, Neil – your comment just provided the opening). No one is afraid to watch footage of how green beans are grown and canned. Can you say the same about meat and dairy?

Plant-based burgers and chicken have been wildly successful and there is no reason to believe alternatives for eggs and other dairy products will be different. The fascination with these products is inspiring a lot of consumers to try them. The question that remains is, will they continue to be compelled to pay the extra up-charge of $2-$4 for these alternative proteins? The plant-based burgers I have tried are quite good, but if I don’t eat a lot of meat on a regular basis, will I want to pay extra for this option?

Well, since I don’t eat meat or chicken (and don’t like fish much), and haven’t for most of my life, this is a real boon for me.

I think the impact can be pretty large overall, because the meat industry seems to be pushing all kinds of articles about how “Beef is really healthier,” etc. The whole notion of “look how highly processed they are” came from that industry ultimately, I think.

Since label reading is a good idea, I can say that Beyond’s products have fewer unpronounceable ingredients and also don’t contain soy. That’s a big deal for some people. And it’s pretty indisputably not very processed and has no genetically modified ingredients.

Overall, it’s a great solution for home and for eat-in. If the taste is right, people will turn to plant-based alternatives for at least a portion of their protein needs both at home and at restaurants.

If it tastes good, and consumers are willing to pay more, then why not? I love real meat, eggs, etc., but as a diabetic, I am glad the industry created the new healthy sweeteners which are great for me and many others. Give consumers choices if you can and see if they respond favorably, and it is a win-win for everyone.

Plant-based proteins are the future. The oft-cited “who identify as…” stats are misleading. Plenty of people don’t “identify” as vegan or vegetarian yet are deliberately avoiding various animal-based products for various reasons. I am literally eating a JUST egg omelette right now. It is a truly revolutionary product that removes any taste or texture-focused reasons for continuing to buy eggs for scrambling purposes (and for anyone who says “what’s the matter with eggs?” a Google search will answer for you). I had to be that specific because invariably, naysayers (not necessarily in this forum!) will come back with the fact that it is more expensive, doesn’t have a real yolk, etc. JUST egg, Beyond sausage, Impossible burgers, Chao cheese (available at Walmart for goodness sakes) … the selection of amazing plant-based products available in the market is truly exciting. If you want to talk about the money side, who invested in BYND a couple of months ago? I’m smiling 🙂

The hottest trend these days are plant-based products that are developed in a laboratory. Beyond Meat, and Impossible Foods are riding a wave of success that is unprecedented in the veggie-based “fake meats” category. It’s clear that grocery chains such as Whole Foods, and fast food companies such as Burger King and Dunkin’ Donuts are riding the wave of momentum, as it represents another revenue stream. Tim Hortons is wise to jump aboard this moving train.

However anything that is laboratory-based clearly has to be highly processed to replicate how actual meat products smell, taste and look. Although they are veggie-based, consumers should be aware of how these products are made, and what exactly the process is that makes the fake meat magic work. As Neil Saunders indicated, nothing replaces actual fruits, vegetables and beans, etc. in terms of nutrition and health benefits.

Based upon Beyond Meat’s meteoric rise in market value since its IPO, I’d say this is very top-of-mind, at least for the moment.

While I’m a big fan (well, “all talk, little” action … but enthusiastic talk!) of meat substitutes, I just don’t see it for eggs (the dairy alternatives are somewhere in between).

And (apparently) like most people here, I see the future more for retail: dining out is still seen by most as something of a luxury, and an occasional purchase, and so there’s less incentive to switch to “good for you” foods.

Braintrust
"The selection of amazing plant-based products available in the market is truly exciting. "

"The hottest trend these days are plant-based products that are developed in a laboratory."

"If the taste is right, people will turn to plant-based alternatives for at least a portion of their protein needs both at home and at restaurants."