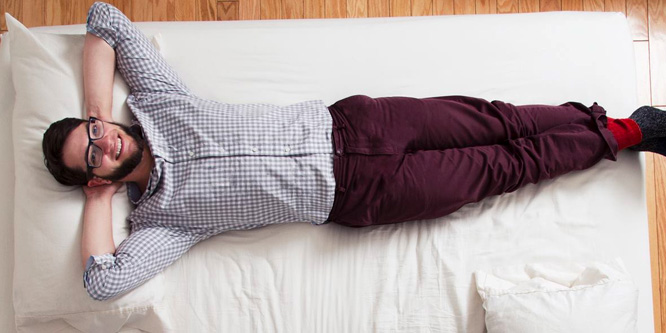 Failing fast is considered a business virtue if not an outright imperative today. But that doesn’t eliminate “Huh, what?” moments when you hear the founders of well-known direct-to-consumer brands admit that they knew that the products they first went to market with weren’t all that good.

“We launched with a pretty mediocre product,” said Moiz Ali, founder and CEO of Native, at the Recode Code Commerce event in New York this week. “We quickly realized there was a need for a better-for-you deodorant and customers were willing to pay a higher price for it, but we also realized we didn’t have that product — so the first year of business was just us trying to figure out how to make a better product.”

Native, which promotes its deodorant and soap lines for men and women as being made in the U.S. without aluminum or parabens while eschewing animal testing, recently announced that it was making the transition from an online-only brand to shelves of Target’s stores. Mr. Ali, who told The Wall Street Journal that the company’s plan was always to move into brick and mortar retail, sold Native to Procter & Gamble earlier this year.

Mr. Ali was joined at the Recode conference by JT Marino, co-founder of the mattress-in-a-box company, Tuft & Needle.

“That was never our expectation, that our first version would be the one,” said Mr. Marino. “Our background is in technology, and what you learn in software and technology production is ‘release early and release often’ and iterate based on customer feedback as fast as you can.”

Mr. Marino and Tuft & Needle co-founder Daehee Park recently sold the company to Serta Simmons Bedding. The two co-founders will continue to lead Tuft & Needle while adding their expertise to their parent company’s omnichannel efforts. Serta Simmons, which is the largest manufacturer of mattresses in the world, will add Tuft & Needle’s mattresses to the list of products that can be sold through its retail partner network.

DISCUSSION QUESTIONS: What is your takeaway from Moiz Ali and JT Marino’s comments at the Recode Code Commerce event? What are the implications for direct-to-consumer startups and established brands and retailers?

Please practice The RetailWire Golden Rule when submitting your comments.
Braintrust
"Never think that your first product is your best product. "

"Product quality and shopping experience are the two most important factors for consumers — you need both for longer-term loyalty."

"One thing is clear, don’t be an early adopter or expect your shiny new product not to be all that shiny!"

As an entrepreneur who has founded several consumer product brands, you always launch with the best product you can develop and work fast to improve it based upon consumer feedback. Never think that your first product is your best product.

But you have to be careful. If your launch product is so bad that the consumers lose faith in the brand right away, then you are sunk.

Their message is correct. Continuous improvement and looking paying attention to the customer is key to building a long-term and profitable brand. Any brand, whether it is a startup or established brand, need to continually look for unmet consumer needs and unmet expectations to improve the brand. Startups are innovating and being acquired by larger brands because the larger established brands are taking too long to innovate. They are not nimble enough. They are not paying enough attention to the consumer.

I think the point missing here is, what happened to true entrepreneurial spirit? Knowingly putting out an inferior product is not smart. Customers aren’t stupid, and they’re not going to trust a company going forward after they have had a bad experience. Sure, it’s great for the bean counters having the customers pay for the company to iron out its kinks. It’s true this has become somewhat of the norm for software, but I would caution companies selling other products not to adopt this policy. Competition today is higher than ever, and all new companies have a quick moment of opportunity to make it or not. Putting out something which is not putting your best foot forward is dangerous and will not lead to great success no matter how excellent your improved products are because you’ve made one colossal mistake — you infuriated the customer. Don’t expect them to come back.

I think the message is: get on with it and dive right in! That said, it is clear that while both of these brands had products that were not perfect, neither were they completely defective – they just weren’t as good as they wanted them to be.

It is probably easier for Native to follow this kind of strategy – mainly because deodorant is regularly purchased. So if people try and don’t like it, it is no big deal. You just need to persuade them to try again when you reformulate.

For Tuft & Needle it is probably different: mattresses are expensive and infrequent purchases. So something that’s less than great can cause serious brand issues. That’s presumably why Tuft & Needle offered a good return policy. In that way, I don’t think they were being dishonest or ripping off the customer.

One thing is clear, don’t be an early adopter or expect your shiny new product not to be all that shiny!

While these companies survived their initial missteps in initial inferior product quality, I wouldn’t consider them role models for entrepreneurs. And Tuft & Needle sold to survive, which is a win for their investors but not necessarily a glowing model of success.

It is very risky to launch a new product with mediocre quality, as first impressions matter. Once you lose a customer on an unsatisfactory experience, it is difficult to win them back.

I’m surprised anyone launched with a less-than-optimum product in the direct-to-consumer distribution channel. DTC consumers have different expectations than brick-and-mortar consumers — a higher quality product at a better price, and they are also more willing to provide feedback to the manufacturer.

The immediate communications with consumers allowed them to address deficiencies in products that would not have been possible in brick-and-mortar channels and communicate the improvements to their consumers.

Look, I get it. Product development is hard. Rarely do we get things right on the first try, and we should not build business plans that expect it to be right the first time. But neither should we go to market knowing the products are inferior, collecting money from consumers while we “perfect” the product based upon their feedback. Especially in the mattress business. People buy mattresses expecting them to help them sleep well for a decade! I have to wonder if they may have adversely affected not only the brand satisfaction but also the health and well being of the buyers of those “early release” mattresses.

I just don’t buy it. Literally. I won’t be buying products I know are not best efforts at whatever they’re building. Companies like Apple introduced innovative new products, but the whole concept with iteration is not about creating junk and making it better. It’s about making cool, effective products and then making it amazing. If it’s just designed to be good enough for an investor’s exit strategy, there’s no real added value to the public or industry.

This story raises a provocative question for me. Where was the real “innovation” for each of these companies: in the attributes of the products themselves or in the alternative ways they were brought to market?

In the case of Native, the positioning of its products as free of unwanted ingredients tapped into a desire of a certain customer segment who desire a chemical-free lifestyle.

In the case of Tuft & Needle, the purchasing and direct delivery mechanism is novel, and it appeals to a shopper segment who hoped to avoid the conventional mattress store experience.

In both these instances, the efficacy of the products may be considered secondary to something else — positioning or purchase experience.

As start-ups, both Native and Tuft & Needle faced big challenges in establishing proprietary manufacturing methods for their products. Initial product quality, by their own admissions, were not ideal. Now that they have survived long enough to become acquisition targets, they can each tap into the production expertise of their new parent companies.

If you wait for a new product to be perfect before launching it, you might never launch it! The important thing is not to release a known bad product — your brand’s reputation might not survive the backlash, especially if you’re a startup. Larger brands have more built-in tolerance for mistakes like that — remember Samsung’s exploding Galaxy Note phone? Brands like Tuft & Needle and Native knew they were filling a need with their first product but also knew they would have to continue to improve it to survive. Had they waited to get the perfect product, we might not recognize these brands today!

Modesty is nice, but honestly I don’t think THIS much candor is helpful: would anyone really buy something that the maker (themself) described as “mediocre”? And I’m curious how they described it when it was actually released.

When launching a new product it’s imperative to listen to what the market says, but at the same time stay true to your brand. We see companies rush products to the shelf and not adequately test them and other companies that spend too long testing and miss their opportunity. The concept of failing fast is one that is quickly being adopted in the tech industry and for good reason: with limited resources companies don’t have time to waste.

Product quality and shopping experience are the two most important factors for consumers — you need both for longer-term loyalty.

Braintrust
"Never think that your first product is your best product. "

"Product quality and shopping experience are the two most important factors for consumers — you need both for longer-term loyalty."

"One thing is clear, don’t be an early adopter or expect your shiny new product not to be all that shiny!"