Wegmans lands in the Smithsonian 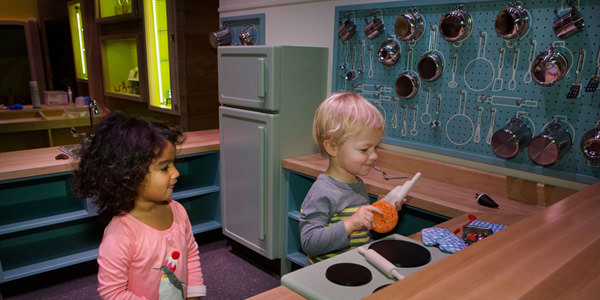 Wegmans has funded the first National Mall exhibit tailored for children 6 and younger at the Smithsonian’s National Museum of American History in Washington, D.C.

The exhibit, measuring 1,700-square-feet, features six sections, each with hands-on, play-based interdisciplinary activities. The sections include: the Farm, the Kitchen, the Port, the Construction Site, the Gallery and the Smithsonian Castle.

Portions of the exhibit embrace a farm-to-table theme, including the Kitchen section where a miniature model of Julia Child’s kitchen encourages kids to cook with pint-sized pots and pans. In the Farm section, kids "find the animals" among the weathervanes, milk bottles, farm toys and lunch boxes while planting and harvesting pretend vegetables.

The more than 100 objects displayed around "Wonderplace" are also designed to stimulate early learners’ interest in museums and American history to support the Smithsonian’s mission. It’s the only exhibit at the National Mall aimed at those six and under and the only one where individuals can touch the items. Wegmans Wonderplace is designed to demonstrate the importance of physical interaction in early learning and brain development. John Grey, director of the National Museum of American History, told the Democrat & Chronicle, "Here they play, they touch, they learn.’

Wegmans underwrote the $1.5 million cost of the exhibit as part of an overall 20-year commitment and will usher in the supermarket chain’s 100th-year anniversary in 2016, as well. Wegmans has been opening stores in the Washington D.C. area.

"Wegmans’ mission is to help our customers live healthier, better lives, and that begins with children," said Wegmans CEO Danny Wegman in a statement. "Having fun through play is the best way to inspire children to learn."

Does Wegmans gain much of a business benefit from the opening of Wegmans Wonderplace? Do you see the benefit as largely consumer goodwill, or is it more beneficial to branding, employee morale or other areas?

Please practice The RetailWire Golden Rule when submitting your comments.
Braintrust
"I have known Danny Wegman for over 40 years. His values have not changed. This is a reflection of those values. It is not coincidence or chance that this is such an admired company."

6 Comments on "Wegmans lands in the Smithsonian"

Like HEB and a few scant other regional grocery chains, Wegmans has already extended its brand beyond its physical store trading areas through word of mouth, social media, etc.

Certainly Washington D.C. is within its boundaries and the Smithsonian exhibit will provide some cachet and a platform for marketing to local shoppers.

More importantly, powerhouse regional grocers like Wegmans have a great opportunity via e-commerce to extend certain items, departments and offerings to shoppers outside their traditional trading areas. To that end perhaps Wegmans is also thinking about positioning itself as a national brand for an upcoming expanded online presence, when investments in the Smithsonian and other national venues will be positioned to provide financial return.

Looking for motive when a person or business does a good thing kind of ruins the story for me. This is especially true when all the suggested motives are at least somewhat mercenary and selfish.

Look, no Saint Teresa is writing this. I’ve done a lot of “good things” for selfish reasons – business benefits, goodwill, branding, etc. When doing so involves some level of deliberation or even scheming, however, I get a little ashamed of myself. We’re seeing a lot of that lately with politicians visiting hospitalized veterans or stooping to help a homeless person … all with the cameras running.

Wish more companies would do good things to make the world a better and let the karma look after itself.

At this Christmas season of giving, I just think it’s really cool that Wegmans did something that brings wonder to children. Wish I could take the grandkids. Thanks Wegmans!

I can see long-term benefits for Wegmans associated with encouraging very young children to engage in the world, to learn about where food comes from and how its prepared, and to grow up to be intellectually curious, museum-going adults. If today’s non-GMO/local/organic trends are here to stay then a well-informed customer base is going to be important to higher-end grocery stores in the future.

I have known Danny Wegman for over 40 years. His values have not changed. This is a reflection of those values. It is not coincidence or chance that this is such an admired company.

Sometimes smart businesses do things because they are the right thing to do. I have to wonder why we always have to wonder if there is an alternative motive. Yes maybe they get some great PR, but it is better than spending your money putting your name on a football stadium.

Wegmans has taken out ads all over the DC area touting the new space. It’s an interesting branding move; the people who visit the Smithsonian museums fit the profile of the Legman’s customer — comfortably fixed and adventurous. It’s a symbiotic mix.

Braintrust
"I have known Danny Wegman for over 40 years. His values have not changed. This is a reflection of those values. It is not coincidence or chance that this is such an admired company."