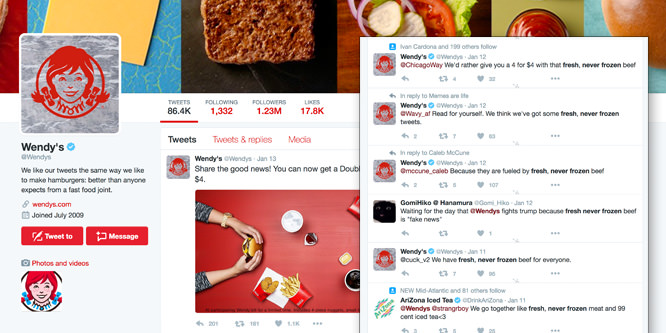 Social media has changed how brands communicate with their customers, not just in terms of where and how they interact with them, but in the voice they use. While this might be conventional wisdom, retailers don’t always have the opportunity to see it in practice as clearly as with Wendy’s recent Twitter gamble — which was a big win.

The Twitter interaction, as reported in The Washington Post, began with a user mockingly questioning the brand’s claim that it uses burgers that are “fresh, never frozen” by asking how a non-frozen burger could be shipped on a truck which is, presumably, warm. Wendy’s tweeted back, “Where do you store cold things that aren’t frozen?” And as the trolling Twitter user tried to return fire, Wendy’s kept up the zings, continuing to call into question the aggressor’s knowledge of refrigeration.

The move brought applause from Twitter followers (and a closed Twitter account from the user). And this high-profile case of reverse-heckling is not, according to The Washington Post, Wendy’s first social media melee. The social media manager at Wendy’s, Amy Brown, is well-known for amusing the fast food chain’s fans and eviscerating its critics. In fact, she got the position after trolling the Wendy’s vice president of advertising on Twitter.

But Ms. Brown’s success as what one might call a “white hat troll” doesn’t necessarily mean that retailers should approach every social media interaction with such moxie. In a world where the tiniest social media gaffe can go out of control, there are many recent examples of brands suffering for not knowing where to draw the line.

Cheerios, for instance, attempted to join the wave of internet mourning in the wake of rock star Prince’s death with a purple “rest in peace” graphic done in the brand’s iconic lettering (and with a Cheerio dotting the “i.”). The tweeted graphic struck internet audiences as being shallow, opportunistic and trying too hard to be hip.

DISCUSSION QUESTIONS: How should otherwise buttoned-down brands use humor and sarcasm with followers on outlets like Twitter? What makes Wendy’s use of a sarcastic voice on Twitter a “win” while other brands might fail doing the same thing?

Please practice The RetailWire Golden Rule when submitting your comments.
Braintrust
"The question we MUST begin to ask ourselves is, how on earth are we measuring success? "

"Don’t we already have enough cyberbullies? Do we need to have competitions to see which brands can do the best job of digitally snuffing critics?"

"If the brand is going to use that, it needs to do so in a genuine manner and pick the battles and be careful not to cross the lines."

11 Comments on "What made Wendy’s Twitter zing a win?"

Humor is one of the biggest drivers of advertising. Many of the best ads ever produced have been humorous ads. Consumers respond to funny and they comment on and share funny. So using humor on social media to engage people is intelligent and is generally going to get a response. However, you have to have the correct person handling the process.

Wendy’s social media responder used humor and sarcasm in a way as not to be insulting or personal. Rather than directly respond to the obvious flaw in the directive from the Twitter user, Wendy’s responded with a question to which any reader would go “duh.” Hence the funny.

Let me answer the question sarcastically.

How are you judging that the tweets are a WIN?

Are they selling more hamburgers or are you judging it based upon social media responses, which any researcher will tell you is a self-selected universe?

Let’s try to get real here. Because retailers are seeing everything else they try fail, we are pandering to the market by over-emphasizing social media.

What really matters here is not the tone of voice in the marketing. Every brand has permission to be real.

The question we MUST begin to ask ourselves is, how on earth are we measuring success?

If retail is going to thrive in the future. (And it is a big IF) We need to stop navel gazing and enact REAL changes.

“Every brand has permission to be real.”

Love that line, Tom. So how about the corollary — “every brand has a requirement to be real”? Knowing a bit about cereal brands (hey, I was on the Wheaties box — no, for real!) Cheerios does not have permission to praise Prince in any way shape or form. I’m sure the current stewards of that brand were sincere in expressing their own feelings and personalities — but the problem is that it does not fit the brand’s personality, and that’s what counts.

Branding is more about what you have to leave out than what you can add in. I didn’t say that first. In fact, I seem to recall that it was the creative head at an agency that once handled Cheerios’ advertising. But that was long ago in a time when a young marketing guy could get paid a dollar to “model” the windbreaker promotion for the photo on the BACK of the Wheaties box. 😉

Ben, if I could rewrite it again I would use your bent. Every brand IS required to be real. Nice catch.

But almost no one in the category understands what a brand really is. They think it is all about them (the retailers). It’s not.

Brand is a self-reflection of the prospect/customer. It defines who they believe they are when they actively choose that brand. Because, when defined correctly, it is impossible to resist by those that covet what the brand promises — BRAND is a persuasive argument

But even that idea is lost. Retailers define brand as selection, quality, price, customer service and accessibility. Maybe they include identity in the mix. But all of those are category benefits. Where is the customer? Where is the prospect? It’s akin to bad salespeople who only talk about themselves.

No wonder the category is spiraling down the toilet.

I love when brands use humor to try to get readers/fans to feel something. But they really need to stay true to what they stand for in the mind of the audience. It’s a fine line, but nudging it forward is part of the marketer’s job. Nudge on! We can all use more humor and more “feel something, do something” in this crazy world.

I support Cheerios for the Prince effort as well. There are a TON of ’80s moms making cereal decisions, and the humans who wrote that were likely authentically feeling sad.

Depending on the brand, humor is good, but sarcasm and attack never are. Don’t we already have enough cyberbullies? Do we need to have competitions to see which brands can do the best job of digitally snuffing their critics? Where do the lines get drawn and who draws them? Branded trolls are still trolls and trolling is a hateful practice. I’m not sure that the ability to silence critics is necessarily a “win,” but it says something about both us and our world that we are entertaining the question.

Using humor in a way that is not personal or insulting is not easy but great to see. While the honor is appreciated, its effectiveness is another matter. Just like “Where’s the beef” commercials, there can be a long debate about the effectiveness of social media humor for Wendy’s. The company needs to decide what needs to be accomplished and how that will be measured before the activity, then measure results and evaluate. Without that information we can not evaluate the effectiveness of the social media activity.

It is a very fine-line tactic for brands to engage with customers with sarcasm and humor. You can get great kudos sometimes like this one, or the other example I think of is the Smart Car “bird crap” discussion on social media (Google that one, complete with infographics, it was hilarious) back in 2012. If the brand is going to use that, it needs to do so in a genuine manner and pick the battles and be careful not to cross the lines. It is as much of an art as a science.

Q: How should otherwise buttoned-down brands use humor and sarcasm with followers on outlets like Twitter?
A: Very carefully. Sarcasm may not be interpreted the same way by all who see it.

Sorry, I see neither sarcasm nor success here, just juvenile time wasting between two people the world knows little about and will quickly forget.

Clara Peller turns in her grave.

Braintrust
"The question we MUST begin to ask ourselves is, how on earth are we measuring success? "

"Don’t we already have enough cyberbullies? Do we need to have competitions to see which brands can do the best job of digitally snuffing critics?"

"If the brand is going to use that, it needs to do so in a genuine manner and pick the battles and be careful not to cross the lines."