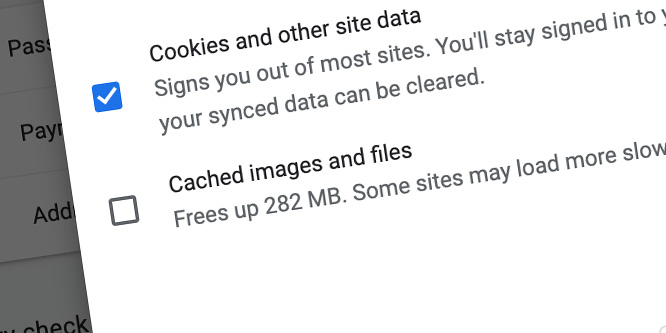 Google announced last week that it is pushing back the timeline of its plans to phase out third-party cookies in the Chrome browser until 2023. The delay provides more time to come up with an alternative method to help advertisers make money online off targeted ads amid pleas for stronger user-privacy protections.

Google previously said it would support cookies — small bits of code stored in web browsers to track users’ activities across the web so that they can be served targeted ads — through the end of 2021.

“We need to move at a responsible pace, allowing sufficient time for public discussion on the right solutions and for publishers and the advertising industry to migrate their services,” Chrome engineering director Vinay Goel said in a blog post. “This is important to avoid jeopardizing the business models of many web publishers which support freely available content.”

Other browsers, like Apple’s Safari and Mozilla Firefox, already block all third-party cookies. As the most-used desktop browser and dominant player in search and ads, however, Google’s steps to move past cookies face intense scrutiny, both from advertisers wanting easier tracking and privacy advocates wanting less.

Google earlier this year launched Federated Learning of Cohorts, or FLoC, a solution by which the web browser categorizes users with similar interests, rather than individuals, in order to protect users’ privacy. The group identifier is used to personalize/target advertisements. The delay was due in part to some negative feedback FLoC has received on its likely effectiveness and privacy risks.

Paul Bannister, chief strategy officer at blog network CafeMedia, told The Wall Street Journal that since the vast majority of digital advertising is powered by cookies, “it’s critical that the replacement technologies get things right. It’s also critical to make sure that even more money doesn’t go to the tech giants in the process.”

Some major brands told Advertising Age that they had hoped the arrival of a cookie replacement plan would have helped the advertising industry move past legitimate privacy and data security concerns. Jonathan Halvorson, VP, consumer experience, Mondeléz, told the publication, “I want cookies to deprecate because it will advance other proposals and get things moving. Rolling it back to a later time will keep us in a purgatory of mediocrity.”

DISCUSSION QUESTIONS: Should Google’s delay be seen as a positive or negative for retail marketing teams? Do you think the industry can find an ideal replacement for third-party cookies that would balance privacy concerns and online targeting opportunities?

Please practice The RetailWire Golden Rule when submitting your comments.
Braintrust
"Without a clear target date, there is less incentive for new technology to be fully developed to replace cookies and for advertisers to adopt it."

While there is some merit in Google’s delay to allow more time for replacement solutions to be implemented, if you keep moving the finish line, then no one will ever finish the race. And while it may be admirable for Google to claim they are helping the advertising industry cope with the end of cookies, let’s be honest here, Google stands to lose just as much as the advertisers in their own business. From a consumer perspective, this creates an incentive for consumers to move away from Chrome to other browsers where cookies are already being blocked. If you’re in the Apple ecosystem, you’re probably shaking your head at this because you’ve likely already opted out of every current tracking tech. How many consumers will choose to migrate to other browsers now because they favor privacy over tracking? The bottom line is without a clear target date, there is less incentive for new technology to be fully developed to replace cookies and for advertisers to adopt it. Sure, you need time to fully bake the… Read more »
2
|
0
-   Share

I very much agree. While I appreciate that they’re being transparent about wanting to get it right, there are clear motives for Google in delaying this transition.

Privacy and targeting are inherently contradictory forces. Google’s delay should be seen as a negative for retail marketing teams because it buys Google time to find new ways to monopolize — and therefore monetize — consumer data.The race is to see which entity or entities can gain control of data flow and analytics, and I don’t see Big Tech backing off anytime soon.

If there is anything we have learned from the pandemic experience it is that a real sense of urgency serves as a key motivator for driving innovation. While Google’s desire to discuss and deliberate a fully baked solution may make sense to them for their own reasons, the extended deadline may slow innovation.

Cookies are wired into the HTTP protocol itself between a client (the browser in most cases) and server. The only alternative would be some new industry-wide standard of data exchange – likely wired into Chromium (the largest codebase) and forced on HTTP servers to support.

From the advertising world, the people I talk with observe that the mythology of the online behavior-based targeted ad is the problem — not the cookies. So many of my colleagues are celebrating the demise of cookies yet increasingly frustrated by the refusal of clients to hear the mistake they’ve been sold by digital sources.

“…frustrated by the refusal of clients to hear the mistake they’ve been sold by digital sources” Can you unpack that a bit more?

Ultimately, I think Google’s delay is a positive for retail marketing teams. The shift away from third-party cookies is a natural evolution of adtech, moving consumers towards the next phase of permission-based marketing in which advertisers and retailers offer a clear, fair value exchange to convince consumers to opt in.

For retail marketing teams, this means providing value to consumers through promotional programs in which the consumer decides if the incentive offered is fair value for their data. Google’s decision to delay shows how difficult it can be to curate the right relationship with consumers. And yet, it’s crucial that retail marketing teams do so.

If done right, consumers should welcome the personalization that comes with deciding which brands and retailers to engage with. Retail marketing teams are in a unique position, and we can’t overestimate the value of the direct relationships they build with their customers for the future of marketing.

Google’s delay is a positive. Retailers are constantly bombarded with the latest and greatest shiny new techy thing and expected to keep up with every bit of it. As a retailer, the most important decisions in tech are what not to do. In this case, the delay will give time for a pragmatic replacement of traditional cookies to be deployed.

Moving away from third party cookie data can actually be a great opportunity for companies as this means they would need to rely more on first party data and keyword contextual-based advertising which can offer better personalization and marketing efficacy.

Cookie matching and unifying data were challenging to begin with, often resulting in irrelevant ads and viewer dismay along the customer journey. Much of cookie tracking is also now rejected by leading browsers.

Furthermore, first party data is more accurate since you collect information about your customers and normally generates higher revenue from a single ad. Using first party data affords you the opportunity to stand out because you have differentiated data from your competitors and can drive personalization because of the quality of the data. Here it will become increasingly key to have a solid strategy around collecting first party data.

Google’s delay is a positive for retail and other online marketing teams because it offers more time for testing of cookie replacement solutions. These solutions have garnered a tepid response thus far despite the early 2022 deadline that had been in place.

Several models are vying to assume the mantle, such as traditional data services, (data bureaus), cross-site IDs (UID 2.0), cohorts (FLoC), contextual targeting (both large and niche publishers), and even fingerprinting, which is frowned upon and prohibited

For the foreseeable future, a basket of solutions will serve in place of cookies, fulfilling different use cases. A winning technology may rise to the top of adoption, but marketers can’t afford to wait and need to test now while they can run controlled experiments with cookies still viable.

So I think you’re dealing with a couple of different questions and answers here dependent on the goal and funnel status. If you’re discussing repeat customers and maximizing LTV, then first-party checkout data is going to be critical, which is part of the reason why one one-click checkout and the network effect is having a huge moment right now. But there is of course the other issue of getting more people into the top of the funnel. Solving for that is going to be critical and difficult.

Braintrust
"Without a clear target date, there is less incentive for new technology to be fully developed to replace cookies and for advertisers to adopt it."