What would acquiring Aetna mean for CVS retail? 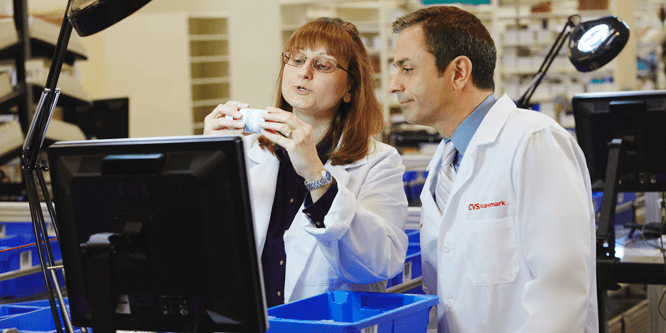 CVS’s potential blockbuster takeover of Aetna is being seen by many as a necessary guard against Amazon.com’s speculated entry into pharmacy. Some see ways Aetna could become a major traffic driver for CVS’s 9,700 drug stores.

With discounts and other incentives, Aetna members could be incentivized to fill their prescriptions at CVS’s pharmacies, as well as to visit in-store Minute Clinics. Pharmacy traffic typically brings with it sales of health and beauty care, grocery and other items at the front of CVS’s stores.

A merger of the second largest pharmacy retailer and pharmacy benefit manager (PBM) with the third largest health insurer should also provide greater leverage in negotiating drug prices to help cover those discounts and shore up CVS’s bottom line.

Still, news of the potential $66 billion deal, first reported by The Wall Street Journal, was nearly dwarfed by a report on Friday that Amazon had received approval for wholesale pharmacy licenses in nearly a dozen states. Although Amazon hasn’t commented on whether the company is entering the pharmacy business, CVS’s move is seen as a response to the threat.

“A potential combination would diversify CVS profit streams ahead of an Amazon entry and set the stage for a new healthcare/retail delivery model,” Morgan Stanley wrote in a note Friday.

CVS’s previous acquisitions of Caremark Rx and Omnicare as well as its expansion of in-store clinics and long-term care already shrank retail to 46 percent of the company’s sales, as of last year. Merging a traditional insurer with a retailer would be a first and could test whether retail might offer a solution to lowering the nation’s healthcare costs. Insights from CVS’s retail clinics and pharmacies could also help Aetna develop more valuable packages.

Adam Fein, president of Pembroke Consulting, told The Washington Post, “Depending on how it’s structured, this could potentially be of great benefit to consumers, because there will be an opportunity to offer more efficient and more effective health insurance plans.”

If completed, the deal is expected to drive M&A activity across the healthcare space.

DISCUSSION QUESTIONS: What would a merger with Aetna mean for CVS’s retail competitiveness vis-à-vis Amazon? What potential business benefits do you see in such a health care/retail combination?

"This move becomes a cost reduction story inside of an even stronger market share growth narrative."

13 Comments on "What would acquiring Aetna mean for CVS retail?"

The health care system needs disruption and the Aetna-CVS merger is an interesting combination. Connecting retail fulfillment with benefits management seem highly complementary and there’s no doubt other major pharmacy retailers will be watching closely. While Amazon’s foray into pharmacy may be part of the calculation, I think the Aetna-CVS merger stands on its own. There are many potential benefits including; lower costs, greater access, more streamlined processes and additional traffic for CVS stores — it’s compelling.

This is an interesting development to say the least. The greatest potential benefit of the potential Aetna acquisition by CVS lies in the area of centralizing, and having one singular analytical view of the consumer. This is the most powerful tool that CVS could leverage to provide a seamless cross-channel health and insurance experience, both online and in their brick-and-mortar stores.

While this may prove to be a protectionism play against any potential Amazon entry into the pharmacy arena, if this acquisition goes through CVS will have a significant competitive advantage over Walgreens and the other players in the health care/retail arena.

For the consumer, aside from the more seamless health care/retail experience, the greatest benefits will hopefully include reduced retail costs and more affordable health care.

The prospect of Amazon entering the pharmacy space and driving down prescription costs will spark insurers and pharmacy retailers to rethink their relationships in innovative ways. The CVS/Aetna talks are the first signal of potentially profound shifts coming to consumer health care.

With insurers are taking a larger role in negotiating drug prices, the combined purchasing power of joining forces with nearly 10,000 retail stores could result in lower prices at the register, creating an effective hedge against Amazon. An equally significant consumer benefit may come in Aetna driving its policyholders to CVS for its broader offering of health care services, leveraging CVS’s experience in nurturing close customer/patient relationships and care coordination.

It is interesting to note that as this merger unfolds, the early history of CVS is that it was founded by a shoe company and the first stores were HBC only without Rx. Over the course of time, it has become not only one of two major drug chains, but also one of the, if not the, largest purveyors of prescriptions in this country. Perhaps more importantly, in reality, it has made itself over the past decade or so into a multi-faceted healthcare entity. The PBM part of the business is now larger than the drug chain; it includes pharmacy benefits plan management, formularies, plan design, consulting and much more. The PBM portion of the business contributes 68 percent of sales. And of the store portion, three quarters is contributed by the pharmacy department. CVS is a healthcare colossus and Aetna will make it more so. The move to acquire Aetna, and over $60 billion in revenues (in comparison, CVS’s annual sales will likely be over $180 billion this year, so it is three times… Read more »
2
|
0
-   Share

This merger, if approved, could provide benefits to consumers. But the consumer side of me, who deals with both of these companies and sees their foibles, wonders if Aetna statements would now contain 10 feet of useless coupons, and would be as inefficient as my local CVS pharmacy counter.

While I know little about the inner workings of big insurance and pharmacy benefit management, I have read that this merger would be a positive disruption that could remove the PBM middleman. I always like removing unnecessary levels of complication. Aside from that, I see the convenience and a much smoother process with this model. What will it mean to Amazon’s entry into the market? Just getting a license does not put Amazon very far into the business so CVS together with Aetna has a clear advantage. They know the ins and outs of the existing pharmacy and drug administration business. Sounds like a winner to me, but the thing I would beware of if I were CVS is that Amazon knows delivery and the last mile. For my 2 cents.

I’m more skeptical than some. Aetna is a life insurance company, a pension benefits company and a provider of drug benefits for Medicare Part D insurance. The drug benefits direct consumers to purchase at particular retailers like CVS as well as by mail order. Walgreens and Duane Reade will no longer be a preferred (less cost) source for Aetna. Hmmm.

While there may be nothing nefarious in the change regarding 2018 sources for drugs, it raises the question of whether there could be in the future. Control like that can result in higher prices.

Amazon and Whole Foods has resulted in lower prices at Whole Foods stores. Combining CVS and Aetna is guaranteed to result in changes. We just don’t know the direction of those changes.

The CVS growth drivers according to the company revolve around key trends such as the aging population, increasing prescription usage and costs and a rising call for value-based care. With Amazon’s bold steps in multiple industries, an integrated CVS strategy that adds scale is a necessary next step. By having an integrated value and delivery model executed via their retail locations with their Minute Clinics, eliminating intermediaries like pharmacy benefit manager companies and now acquiring health insurer Aetna, CVS is making the right strategic moves to grow and compete. The move to wellness and health is not new; recall that more than three years ago CVS halted the sale of cigarettes in its strategic pivot (see my BrainTrust comment here). There are two trajectories to the move by CVS: along the top line they’re providing a valuable network of easy, locally accessible retail sites combined while amassing personal and medical data to help refine the company’s interactions with customers that are increasingly focused on wellness and health. On the bottom line, CVS can optimize operations… Read more »
9
|
0
-   Share

Decades ago I worked for the Center for Science in the Public Interest, a health advocacy group. I left after having lost a battle about direction. I ran into some of the people a couple years later, and we argued about the failure of the Dr. Koop health video series in the early to mid 1990s. They were sold at CVS I think. The guy who beat me out said they failed because “the videos were too much Koop.” I disagreed. I said “no one goes to a pharmacy like CVS for ‘health services,’ they just go to buy stuff.” Well, CVS is changing this reality, they have the potential to reposition as “health stores.” This possible hook up with Aetna allows them to redirect and reconfigure the “product-service system” in a variety of ways that could be quite innovative.

Thank you Richard for your insight. I agree with you that CVS is changing current reality with innovative repositioning to “health stores.”

What is widely overlooked is that healthcare began to be “socialized” as early as the 1950s, with employer provided medical insurance a growing phenomena. The whole concept of insurance is very socialistic. That is, the entire insured population is a “social” group for the purposes defined by their insurance policies. The medical profession acquiesced readily to this whole phenomena, because as one of my former students, now MD, said, “I don’t want anything to do with the money side of the business. I just want to practice medicine.” Or something like this. And then the medical licensing boards vigorously supported the cartelization of the practice of medicine by making the practice of medicine anywhere in the country subject to STATE licensing. The insurance companies found this convenient for the cartelization of insurance, also, so that insurance companies could not sell policies across state lines, unless they were so licensed themselves. All the while the money side of health care ballooned, with the government getting more and more involved in its management, given medicare, etc., etc.… Read more »
1
|
0
-   Share

My instinctive reaction to this is the legalistic/”good citizen” part of me kicks in and I see a lot of potential conflicts-of-interest and anti-trust problems. As a shareholder, I’d also be concerned about a retailer getting involved in a heavily regulated and contentious issue like health insurance. I think all of these concerns tend to overwhelm whatever advantages there might be on a strictly retail front.

As others have commented, I don’t see Amazon as necessarily related to this disruptive merger. The benefits to the consumer if executed well are promising. CVS can bring its customer centric mission and approach to an insurance company that not unlike many others often forgets who they serve. Perhaps CVS can bring further efficiencies into claims processing by offering in-house clinic services pre-approved by Aetna. I’ll be watching with great curiosity and fingers crossed for a positive outcome for the consumer.

"This move becomes a cost reduction story inside of an even stronger market share growth narrative."