Where is Starbucks’ NFT odyssey heading? 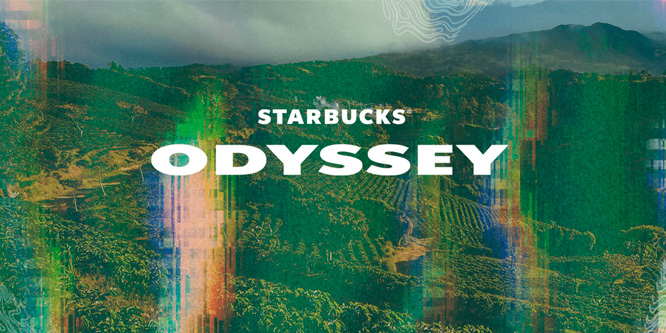 Starbucks is revamping its loyalty program and working an NFT platform into the mix, although it is not using that acronym to describe its digital art offerings.

Starbucks recently announced its new digital community called Starbucks Odyssey, which will launch later this year, according to TechCrunch. Users will be able to log in with their loyalty app credentials, then take part in games and challenges referred to in-app as “journeys.”

Visitors who successfully meet objectives and complete journeys will be rewarded with NFTs (that can also be purchased and traded on a marketplace). The digital collectibles will be referred to as “journey stamps” within the platform.

Visitors will also be able to unlock perks by accumulating stamps. Starbucks is envisioning the perks as bigger than the free drinks and food typical of loyalty programs. Anticipated rewards include access to classes or unique merchandise or, at the higher end, invitations to exclusive and even international events. The highest tier rewards are expected to go to those who purchase the most expensive NFTs, but lower tiers will be accessible to those who earn their stamps in-app.

A number of retailers and brands have begun experimenting with “Web 3” technologies like NFTs.

Pacsun late last year offered its first collection and followed that up this year with two series of “Mall Rats” NFTs, which depict cartoon rats wearing Pacsun products. One of the Mall Rats collections was done in conjunction with Reebok.

And Nike went as far as to acquire an NFT creation studio called RTFKT (pronounced “artifact”), which established itself selling virtual sneakers made in collaboration with artists for tens of thousands of dollars.

But NFTs have also proven controversial for a number of reasons. In the world of art collecting, some have grown skeptical as to whether  “owning” an NFT is truly comparable to owning an original piece of art.

The amount of energy required to mint NFTs has also raised environmental concerns. The UK branch of the World Wildlife Foundation came under fire from conservationists for launching an NFT line, which it quickly canceled due to backlash, Climate Change News reported. The cancellation created an opposite backlash from NFT collectors.

DISCUSSION QUESTIONS: Do you see Starbucks’ implementation of NFTs as being worth the company’s investment given the controversy surrounding the technology? What other ways might a retailer use “Web 3” tech to improve its loyalty program?

Please practice The RetailWire Golden Rule when submitting your comments.
Braintrust
"I would have rather seen them use 'Web3' to do some good in the communities in which their coffee is sourced."

14 Comments on "Where is Starbucks’ NFT odyssey heading?"

NFTs are definitely a danger zone for most companies given some of the hype curve issues that surround them.
Starbucks’ program is different though – the NFTs are a way to access other benefits, not a potentially appreciable asset on their own. If there are other benefits behind the program (like Starbucks is doing), it doesn’t really seem that different from loyalty points, or airline rewards levels – spend certain amounts and you get access to higher tier rewards.

I am so out of the demographic they’re aiming for. So I would say “Hell, no” but on the other hand, I have to say “What do I know?” We, here, are not the targets.

Today I go to Starbucks and know when I buy a certain amount, I can get a free coffee. I don’t want it any more complicated than that.

My Nike sneakers are on my feet. I can even customize them. Why would I want virtual sneakers?

“What other ways might a retailer use ‘Web 3’ tech to improve its loyalty program?” Just keep the programs simple.

I’ve long been an advocate for Starbucks to re-focus on how to adapt its experiences to new consumer behaviors, but this is not what I had in mind. My age may color my opinion, but I’m just not sure that digital art experiences and NFTs are going to move the needle for the vast majority of Starbucks customers. I always hesitate to question Starbucks’ marketing prowess (or the vast amount of data fueling their marketing strategies), but my gut tells me this is a long shot. I have been hoping for innovative store experiences that maximize engagement with all the shoppers who recently converted to mobile shoppers. And I was hoping for ways to expedite the drive-thru process. And new store designs that reinvigorate Starbucks’ brand as the third place. But who knows, maybe more people than I expect have been waiting for NFTs and exclusive freebies to re-engage with Starbucks. It will be interesting to see if their data is smarter than my instincts (probably a good bet!).

To address the first question, they used Polygon to address the energy use issue. So it was on their radar in terms of how audiences might react. I think most of what they are doing is a marketing gimmick. It might provide some internal learning but we are so early in this and far away from most consumers even understanding (or caring) what NFTs are, what Web3 is, and especially not from a brand like Starbucks where people are mostly thinking — I just want my drink. I would have rather seen them use “Web3” to do some good in the communities in which their coffee is sourced. Something creative whereby the works could contribute to creation of some artifacts and then share in their profits — or an entire community. There seems to be the potential for a lot of utility but brands are doing these (sorry to say) ridiculous projects that have no depth. In my view, Starbucks really missed the mark on this, I would have expected them to bring a more… Read more »
2
|
0
-   Share

Fantastic move by Starbucks to work a new digital community called Starbucks Odyssey into its loyalty program! Offering “journeys” using gamification features and rewards of “journey stamps” aka NFTs that lead to value-added perks is spot-on. Starbucks is making Web3 super user friendly here and removing the barriers of confusing acronyms. Very timely as we head into the holidays. Love it!

Given the issues surrounding the minting of NFTs, it’s odd that Starbucks would take this path. They even avoid calling them NFTs. The whole idea of “journey stamps” and elevated rewards sounds pretty good. Why muddy the waters with NFTs? What is the loyalty going to be tethered to? The coffee? The food? The new elevated rewards? The NFTs? The entirety of the experience? The NFTs sound like toys in search of a sandbox to play in.

“Users will be able to log in with their loyalty app credentials, then take part in games and challenges referred to in-app as ‘journeys’.” In simple terms, this is gamification. Already, when a loyalty program offers a user a way to accrue value with each brand interaction, those apps drive category-leading engagement. I encourage anyone skeptical about Web3 and NFTs taking off to read about the applications in fitness apps. Paceline and Sweatcoin are two examples that make the value proposition a no-brainer for even Web3 skeptics: get paid to do something you do anyway like walking, and gain more valuable and exclusive experiences the more you commit. It’s not hard to imagine the parallel for buying coffee or other goods.

Too often in retail the dominant mantra seems to be, “When in doubt refocus on offerings no consumer really wants or has ever asked for.” For Starbucks’ NFTs are a distraction, a sad attempt to jump on a trend that may have already jumped the shark rather than focusing on core operational issues such as employee relations that open the door to unionization, problems associated with trying to marry social justice initiatives and the realities of the retail experience, the perennial day-part marketing problem, and how to actually take the retail experience and the brand into the future rather than getting blinded by hype. Web3 technologies offer a potential suite of powerful tools to retailers, but Starbucks shouldn’t start with a program that – at best – will create a series of over-caffeinated digital Beanie Babies.

It is a perfect example of tactics without strategy.

Gene, I could not agree more. That’s what retailers do when they don’t know what to do.

Aren’t Loyalty and Rewards the perfect application for NFTs in retail?

Trevor, I’m not so sure. Depends on how the market (in this case Starbucks’ customers) values NFTs. My guess? Jaded as I am, I’m betting their valuation will be a little lower than Starbucks hopes.

I think the confusion is around NFTs for JPEGs vs. NFTs as a technical architecture to validate ownership and enable the safe transfer of such ownership. If you can now earn perks, validate them with little fraud, and transfer them, you have a safer, more viral marketing and loyalty system that encourages community interaction. That’s all gravy. And I love those sous vide egg bites so much, I think I would actually treasure that as an NFT. 😉

Braintrust
"I would have rather seen them use 'Web3' to do some good in the communities in which their coffee is sourced."