Why is Adidas partnering with a knockoff brand? 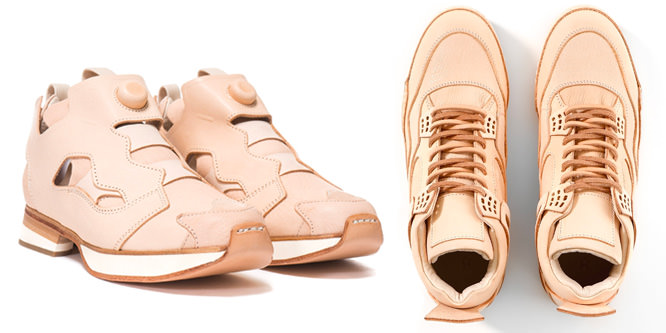 The ascendance of e-commerce has brought about a huge wave of knockoffs and bootlegs, especially when it comes to sought-after, high-price, limited-edition products like sneakers. But instead of pursuing legal action, one of the biggest global sneaker manufacturers is now doing business with a small company that has made its name, at least in technical terms, with a violation of their trademark.

Adidas announced a partnership with Japanese artisanal shoe manufacturer Hender Scheme, a company that makes small-batch, handmade reproductions of big sneaker brands, according to Quartz. Adidas has brought on Hender Scheme for a multi-season collaboration, beginning with the creation of replicas of three popular shoes, all bearing the Adidas logo.

Unlike standard sneaker knockoffs, Hender Scheme styles shoes with a natural, tanned-leather look that gives them an identity all their own. In fact it may be their difference from the original shoes as much as the similarity that gives them their appeal to customers.

But while the creator considers its artisanal sneakers “homages” to the original brand, they are intentionally patterned directly on shoes made by Adidas and other big-name brands and, as Quartz reported, they often sell for $1,000 and up. So even though it can be argued that Hender Scheme is generating profit based off of names like Adidas and Nike, big brands have not jumped in to stop the company.

It’s clear that Adidas draws a delineation between homages and knockoffs, given that the manufacturer has not been shy about protecting its trademark elsewhere. Last year the company brought suit against Sketchers over design similarities.

And outside of accusations of concept theft between manufacturers, bootlegging by independents has become such a problem that major e-tailers have been forced to step in.

Both Amazon and Alibaba have struggled with third-party sellers using their platforms as hubs to sell counterfeit goods. Late last year, Amazon announced it would begin to require that third-party sellers pay fees and provide documentation for selling certain major brands, Adidas and Nike among them, along with other non-shoe brands like Hasbro and Samsung.

DISCUSSION QUESTIONS: What do you think of Adidas’s collaboration with Hender Scheme? Where should brands draw the line between “homage” and outright bootlegging? Should brands in other areas consider partnering with independent small companies selling “homages” to their products instead of pursuing trademark action?

Please practice The RetailWire Golden Rule when submitting your comments.
Braintrust
"Get a piece of the returns instead of incurring legal fees and a sour image. The wave of things to come, no doubt."

"Sneakers that sell for $1,000 and up are NOT knockoffs. They are art based on life, so to speak."

"Repurposing is all the rage right now and it sounds like Hender Scheme is repurposing classic designs to make them new again. Great idea!"

11 Comments on "Why is Adidas partnering with a knockoff brand?"

A very smart move I would say. If Adidas has seen a very real threat from Hender Scheme and identified that their product is popular and likely to remain so, then why not bring them on the inside and work with them instead of taking a law suit against them? Given the amount of time and money it takes to take action against a company, why not put in the same — but positive — effort and make it an asset of the company? It won’t always work but in this case it does.

Sneakers that sell for $1,000 and up are NOT knockoffs. They are art based on life, so to speak. Should they partner vs. sue? That would be a no-brainer to me. Smart move on the part of Adidas. For my 2 cents.

Wow — if you can’t beat ’em, join ’em! Amazing and savvy. Get a piece of the returns instead of incurring legal fees and a sour image. The wave of things to come, no doubt.

There’s a fine line between a knockoff and repurposing. Hender Scheme is drawing from popular sneaker designs, but creating the product out of unique materials with a different feel, so it makes complete sense that an iconic shoe brand such as Adidas would want to get in on the action. Repurposing is all the rage right now and it sounds like Hender Scheme is repurposing classic designs to make them new again. Great idea!

As other BrainTrusters have suggested, this was a very smart way for Adidas to avoid actively defending a trademark infringement which is a costly exercise. But I do wonder how applicable this strategy will be for other brands who inspire less innocuous knock-offs.

I’m not a lawyer — and even if I were, I don’t know the specifics, so wouldn’t be able to say for certain — but I’m confused by the statement “(HS) at least in technical terms … violation of … trademark.” A knockoff is not a trademark violation; at least not per se, though obviously the specifics of the situation may dictate a violation has occurred.

Back to the specifics of this case: I don’t really understand what Adidas is trying to accomplish, other perhaps than some publicity (which hardly seems worth the effort, given the low profile this has); and whatever it may be, I can’t see too many other brands emulating it.

With online brand protection becoming increasingly difficult in the digital age, sometimes the reality is, if you can’t beat them, join them (or make them join you).

This is a smart move by Adidas to collaborate with Hender Scheme as they’ve already gained popularity in the high-end sneaker world. While there is a fine line between an “homage” and bootlegging, each case is unique. Hender Scheme puts its own twist on its sneaker using natural, tanned leather to create high-end sneakers. By collaborating, they are capturing revenue from a former competitor, creating a relationship that gives them more control over their brand use, and opening the door to more high-end Adidas sneakers, thereby increasing Adidas’ brand equity.

These products may have a similar look to their originals, but they certainly have a different feel to them, don’t they? This is a smart move by Adidas, assuming they’ve worked out favorable terms in their agreement with Hender Scheme. These are very upscale shoes being sold at very high prices and allows Adidas to get a piece of that segment without having to design a brand new product. What’s old is new again!

In order to effectively fight the fake markets, all products should be serialised and the customers should be empowered to check the originality and other product’s characteristics. Serialization is maybe the most powerful and cost effective anti-counterfeit solution, the [tools] are immediately available, easy to implement and at a cost near to zero.

To the question, should brands in other areas consider partnering with other small companies selling “homages” to their products … I think it’s really a case by case decision. On one hand, the shoes above are difficult, for me at least, to relate to iconic Adidas brands so there seems to be everything to gain by associating with this more expensive designer brand that’s paying tribute. On the other hand, if someone were to pay “homage” by slightly tweaking the Nike swoosh, that’s a different ball game. Overall, imitation, as they say, is the sincerest form of flattery. Look at the number of golf courses that intentionally mimic design features of a St. Andrews or Augusta National, for example.

Smart move on Adidas’s part! It’s not a knockoff in this case. The Adidas D Rose you buy for $40 vs $100; on a street or off brand website is a knockoff. This promotes cachet of the homage when it sells for $1000.

Braintrust
"Get a piece of the returns instead of incurring legal fees and a sour image. The wave of things to come, no doubt."

"Sneakers that sell for $1,000 and up are NOT knockoffs. They are art based on life, so to speak."

"Repurposing is all the rage right now and it sounds like Hender Scheme is repurposing classic designs to make them new again. Great idea!"