Will Amazon’s ‘brand gating’ put counterfeiters out of business? 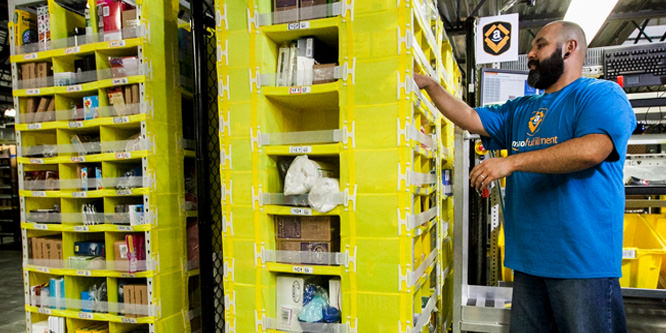 Counterfeiters and unauthorized sellers have long caused problems in Amazon.com’s relationship with brand manufacturers. Now comes news the e-tailing giant is getting tougher with new sellers on its marketplace. The company will now require proof of purchase from popular brands and one-time fees up to $1,500 per brand.

“We want customers to be able to shop with confidence on Amazon,” Erik Fairleigh, an Amazon spokesperson, told CNBC. “For certain products and categories, Amazon requires additional performance checks, other qualification requirements, and fees.”

Amazon is taking this action — called “brand gating” — less than a month after Birkenstock announced that beginning on Jan. 1st it would no longer do business with the site or any of its third-party sellers. The brand made the decision after finding a large increase in counterfeits being sold on Amazon along with a big jump in unauthorized sellers.

“The Amazon marketplace, which operates as an ‘open market,’ creates an environment where we experience unacceptable business practices which we believe jeopardize our brand,” he wrote.

“Policing this activity internally and in partnership with Amazon.com has proven impossible,” Mr. Kahan added.

Reports have identified Adidas, Funko, Hasbro, Hewlett Packard, Lego, Nike and Samsung among the brands being checked as part of Amazon’s new protocol.

DISCUSSION QUESTIONS: Will Amazon’s “brand gating” make a serious dent in the amount of counterfeits and unauthorized sellers on its site? Will the fees and process associated with the practice drive away legitimate sellers as well as those being deceptive?

Please practice The RetailWire Golden Rule when submitting your comments.
Braintrust
"Both counterfeits and low-quality items are a (small) blemish on Amazon, so the marketplace definitely needs more attention from management."

"So, in order to remedy their relationship with said brands, Amazon decides to … charge them more?"

"I believe that most Amazon merchants with legitimate access to product will benefit in the long run."

8 Comments on "Will Amazon’s ‘brand gating’ put counterfeiters out of business?"

This new policy should put a dent in the sales of counterfeit goods but, in the process, might drive away some legitimate sellers. Getting rid of counterfeits should be a top priority for Amazon. Counterfeit products hurt Amazon and tarnish its brand.

It’s a great move in the right direction, but if the fees are too steep, small legitimate sellers will be driven out of the marketplace. Both counterfeits and low-quality items are a (small) blemish on Amazon, so the marketplace definitely needs more attention from management.

I wouldn’t expect that this set of moves by Amazon will entirely fix the counterfeit problem that affects Amazon, brands and legitimate sellers, but it’s great to see Amazon making these moves. While these fees and documentation will undoubtedly be a hassle, I believe that most Amazon merchants with legitimate access to product will benefit in the long run.

Interesting development on the back of the recent criticism of Alibaba. The grey market will always be a problem for marketplaces. I guess it’s more damage limitation than anything else.

Half of this policy should have been in place since Amazon’s inception; the other half is adding offense to injury. Sure, requiring a proof of purchase makes sense, but I fail to see how charging an exorbitant one-time fee will help prevent counterfeiting. Amazon made a mistake in not initially requiring a proof of purchase from major brands. So, in order to remedy their relationship with said brands, Amazon decides to … charge them more? I’d expect a more intuitive move from such a retailing superpower.

This will put a slight dent in the illegal sellers — but they are very smart and may find a way to shift to bundling no name crap or some other unique way of doing it. I never buy motorcycle parts or Apple support products on Amazon — been taken more than once. Catching all this little vermin will require more and more feedback from shoppers to people at Amazon that are willing to listen.

Having competed in most Amazon categories, it’s my view that the counterfeit problem is overblown. Actually, a fraction of the perception. Consider the 2nd point made by David Kahn CEO of Birkenstock and in my view, the main reason for the decision. “A constant stream of unauthorized and unidentifiable sellers that display a ‘blatant disregard’ for Birkenstock’s pricing policies.” And that is the real issue. Birkenstock can’t control its supply chain. Birkenstock retailers can’t compete with the price points on Amazon, so they buy less, or push for lower prices. Every shoe store selling a Birkenstock sandal for $150, when that same sandal is on Amazon for $109, they inform their potential customer, “You don’t know what you are getting on Amazon.” Amazon has also created this beast because every buyer who wants NO PUSHBACK from Amazon on a return knows by now that simply saying “It’s a fake” is 100% guaranteed to get free return shipping and a full refund. It’s out there in the buyer psychology … You buy an item on Amazon,… Read more »
3
|
-1
-   Share

If you’re a professional counterfeiter, you need a channel that you can sell your products through—quickly and easily. Is paying $1,500 going to block me from offloading half a million dollars’ worth of counterfeit products in two weeks? Probably not.

Braintrust
"Both counterfeits and low-quality items are a (small) blemish on Amazon, so the marketplace definitely needs more attention from management."

"So, in order to remedy their relationship with said brands, Amazon decides to … charge them more?"

"I believe that most Amazon merchants with legitimate access to product will benefit in the long run."