Will acquisition of a mom and pop shop pay off big for Kroger? 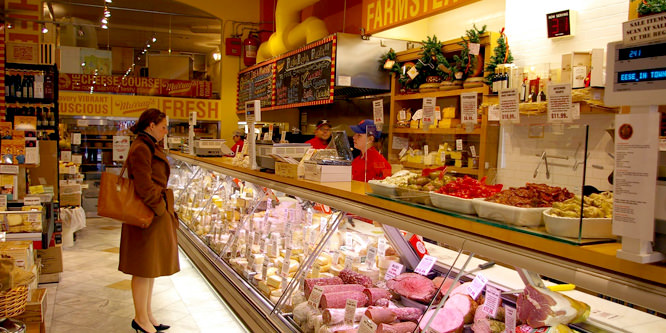 One surprise is that the acquisition of a New York institution by a national giant failed to cause an uproar. That could be because Kroger had already been partnering with the niche shop. Under a distribution deal launched in 2008, Murray’s Cheese in-store shops are now in more than 350 Kroger locations.

Murray’s former owner, Rob Kaufelt, said in a statement, “I’m proud that we’ve been able to maintain the spirit and service of a mom-and-pop neighborhood shop amidst our growth into the national market.”

Mr. Kaufelt will become a strategic adviser. Nick Tranchina will continue to lead Murray’s Cheese. Murray’s Cheese has one other stand-alone location in Grand Central Terminal.

Still, one cautionary note came from Arlene Spiegel, a restaurant and retail consultant, who told The Wall Street Journal that Murray’s Cheese faces risks preserving its reputation with foodies.

“Several craft soda brands have been purchased by large companies and sold through mainstream distribution channels,” Ms. Spiegel said. “These brands have better market penetration but lost their luster.”

DISCUSSION QUESTIONS: Are national chains such as Kroger becoming better at acquiring niche chains? If so, why? Does Kroger’s acquisition of Murray’s Cheese potentially provide bigger benefits for the buyer or seller?

"National chains have learned from experience that when they acquire a niche chain the best thing they can do is nothing."

"When Kroger introduced Murray’s Cheese it really stood out. Like an island."

16 Comments on "Will acquisition of a mom and pop shop pay off big for Kroger?"

Larger chains have to make acquisitions like this in order to remain relevant and innovate. They cannot innovate within their political corporate structure.

These acquisitions allow the buyer to offer its customers something it could not provide on its own. The benefit is clearly in the buyer’s favor if the deal is structured correctly. Certainly Murray’s benefited from the expansion of its brand.

National chains have learned from experience that when they acquire a niche chain the best thing they can do is nothing. Supporting the acquisition by adding their expertise to back-of-the-house functions can bring benefits. Changing what made it a success is definitely the wrong thing to do.

Kroger’s style of buying, focusing and driving the niche chains works. Our local Fry’s chain in Arizona is still local. It is Kroger strong, but still Fry’s to even the oldest Arizonians I know. They love the stores/brand/traditions and are not shifting. They live by their Fry’s loyalty card and Kroger makes the card even better.

Kroger knows how to do it right! Keep up the great work!

The addition of a Murray’s Cheese shop inside my local Ralph’s market meant that Kroger was finally taking cheese and olives seriously. In the few years since this happened, Ralph’s has become our go-to store for these products. Not only have we spent more at Ralph’s on this category, but special trips are made to Ralph’s to buy these goods, usually resulting in purchasing other items as well. That’s why Kroger bought Murray’s.

Talk about stores that haven’t changed in the last 20 or so years. I can walk into my neighborhood Kroger and aside from it now being a Superstore, it still looks and feels the same. In other words, it offers me the same boring experience it always has even though it is now shiny and new.

Can stores such as Kroger benefit from acquisitions such as Murray’s Cheese? You bethcha! As long as they keep the Murray’s experience alive and don’t just bring the merchandise into their existing format.

Let’s think Trader Joe’s here. Going into that store is always an adventure and one to look forward to. When was the last time you got exited about going to your local grocery store?

If acquisitions and pop-ups can help bring a difference to Kroger, they get my 2 cents!

From an acquisition point of view, the seller always benefits more than the buyer.

Ultimately the key to success will be understanding that they did not buy cheese, they bought a brand. How will they handle the brand?

This is an absolute must for large grocery organizations as they proclaim that they are sustainable, farm-to-table and environmentally conscious. This strategic move of acquiring a small yet well-known artisanal cheese company, such as Murray’s Cheese, will bring the big city experience to middle America. Having a localized, and personalized, luxury cosmopolitan experience would be a significant advantage for Kroger, and certainly there would be the added benefits of increased margins from the luxury cheese and other offerings.

A store-within-a-store concept would be a significant advantage for Kroger and, at the same time, Murray’s Cheese will reap all the benefits of having significantly more financial backing and the ability to scale, expand and sustain.

Kroger is a very smart organization. They will do what is right and, if they are really smart, let it naturally expand without overkill. Duplicating success is doable, but it cannot be rushed or be on every corner or it will lose its uniqueness, and I believe that any new standalone stores will be placed in the right high-end areas and thrive rather than being just another cheese store in a suburban strip plaza.

When Kroger introduced Murray’s Cheese it really stood out. Like an island. As they have moved their healthy/organic category into a more sophisticated space we have more choice, but not in every category.

I believe Kroger needs to do this sort of thing — whether partnering with local companies, small ones, or being creative within their own walls — to keep the experience fresh.

Yes! Large chains that acquire niche brands like this AND realize they need to leave them intact when integrating to their existing stores are making great decisions. This is the quickest way large brands can innovate for their customers. Otherwise, they will look tired and boring to even their most loyal customers without introducing new items shoppers want!

This is only the beginning…

I suspect how one views these acquisitions depends on who you are. If you live in Cincy or Roanoke or wherever one of these 350 in-store locations exists, then you’re probably better off. Even if you have a pale imitation of Bleecker St., you still have something you didn’t before.

OTOH, if you were a customer of (the actual) Bleecker St., I’m not sure what you’re getting out of it. Oh, sure, your store likely has “greater financial stability,” but I doubt that was much of an issue here. And “scale in purchasing” is likely the antithesis of what you valued when you walked thru the door.

So these types of unions — and whether they’re called “marriages” or “mergers” or “takeovers,” says a lot about how well they go — are always a balancing act: accepting that there will be some loss in creativity and entrepreneurism and, of course, uniqueness against the ability to bring something special to a larger audience.

Similar to how Walmart is acquiring niche online retailers to strengthen their selection, Kroger’s merger is definitely a smart move, especially since they were already partnering with Murray’s Cheese beforehand and doing a good job with it. National chains like Kroger are certainly becoming better at acquisitions. Kroger made the right moves by incorporating Murray’s knowledge and expertise to properly train and educate employees to becoming cheese experts and spreading Murray’s specialty across their stores.

Kroger is buying a brand, innovation and access to new shoppers.

Starbucks bought La Boulange and it paid off. Their pastries and food offerings in general are much better. Key is, can Kroger proliferate that knowledge to 2800 stores the way SBUX did? Not sure, IMO, as they’re as organized as SBUX from that perspective since they are structured regionally for many aspects of their business.

I have buying at the Murray’s Cheese location at Kroger in Worthington, Ohio for 5+ years. As Tom Ryan points out, Murray’s Cheese already appears in over 350 Kroger stores. Product, selection, quality, knowledgeable associates, helpful and friendly suggestions, and attention to detail have consistently been core to the team in this area adjacent to the deli.

I’ll take the counterpoint of Arlene Spiegel. If Foodies are going to have agita over quality cheeses, knowledgeable associates, and a much broader understanding of the history cheeses and how to use them coming to the masses, we’ll all just have enjoy a private chuckle about her Foodie-friends’ insecurities.

Kroger is bringing an asset to a much broader marketplace with the help and guidance of Rob Kaufelt and his team. Both Kroger and his family are greatly enriched, as are Kroger shoppers with this move.

"National chains have learned from experience that when they acquire a niche chain the best thing they can do is nothing."

"When Kroger introduced Murray’s Cheese it really stood out. Like an island."