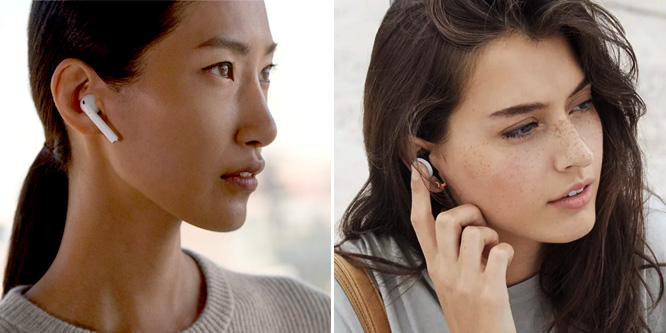 Amazon is planning to launch a wireless in-ear headphone to not only challenge Apple’s popular AirPods in the mobile wearables market, but to bring Alexa on the road.

Like AirPods, Amazon’s earbuds will sit inside users’ ears without clips and allow wearers to not only listen to music and other audio media, but use voice commands to get information, tap thousands of Alexa skills and order goods from Amazon while on the go, according to a report from Bloomberg. The product will also feature physical gesture controls such as tapping to pick up and end calls and switch between songs.

As in past innovations, Amazon’s earbuds are expected to be priced below the $159 AirPods, and yet offer higher audio quality, according to the report. Amazon plans to launch the device in the second half of the year.

Wireless earbuds, or hearables, is one of the fastest growing wearable categories. Apple’s Airpods, launched in holiday 2016, commands 60 percent share, according to Counterpoint Research. Samsung, Google, Jabra and Sony also compete in the space.

One drawback for Amazon is that its hands-free earbud will have to pair to a mobile smartphone and may face challenges delivering seamless Bluetooth connectivity working as a third-party developer with Google’s Android and Apple’s mobile operating systems. At the least, users will have to download an Alexa app to fully access the smart assistant’s features.

Loup Ventures managing director Gene Munster told Yahoo Finance, “Basically, there’s friction there because they [Amazon] don’t own the phones. It’s another example of a hurdle they need to clear to get consumer adoption.”

A few reports also pointed out that while Amazon saw success with Kindle and Echo, Amazon’s only mobile hardware device, the Fire Phone, was a flop.

Writing for Engadget, Nicole Lee believes an Amazon earbud could be a bigger threat to Google, the fast-rising second in digital assistants, than Apple. While Google has advantages with its Android operating system, she wrote, “If Amazon’s version could be cheaper, sound better and have a smarter assistant on board, that could be a pretty compelling alternative for non-Apple devotees.”

DISCUSSION QUESTIONS: How important will developing a wireless earbud be for Amazon’s Alexa virtual assistant ambitions? Is not having its own smartphone a major roadblock to competing in the earbuds category?

Please practice The RetailWire Golden Rule when submitting your comments.
Braintrust
"Amazon needs to work on the value proposition here — and get the tech to work right."

"The challenge for Alexa will certainly be acting as a third-party app on mobile platforms which openly compete with Alexa: Siri and Google Home."

"That said I’m sure in the future everyone will be releasing earbuds with virtual assistants built in ... Whether we’re culturally ready for that yet though, I’m not sure."

Do I want to bring Alexa on the road? If the answer is yes, then developing a wireless earbud may be an advantage to Amazon.

Look, this problem with Alexa adoption is not the inability to take “her” on the road. New, lower-priced earbuds may take some share from Apple’s earbuds for use as earbuds, but they will not in any way move the needle for greater adoption of Alexa functionality. The single greatest challenge Amazon faces with voice interfaces is the need to remember all those entirely forgettable skills. News of a constantly growing number of skills in the Amazon marketplace is evidence of the problem: people just can’t remember the specific syntax required to activate the tasks they want Alexa to perform. So we revert to the very few tasks that provide the greatest value with the least friction: news, weather, music and timers/reminders. Maybe these new earbuds will be priced low enough that Bezos can buy market share while he tries to figure out how to improve the language processing skills to eliminate the need for highly-specific skills. But until he does, earbuds will not increase Alexa adoption beyond the few skills that are easy to remember… Read more »
5
|
-1
-   Share

Why would any consumer want earbuds that are challenged with delivering “seamless Bluetooth connectivity working as a third-party developer with Google’s Android and Apple’s mobile operating systems.” That is pretty much the smartphone universe these days, and it does not work particularly well with either. But it sells for a premium price.

Ambitious – Yes.
Likely to succeed – No.

Amazon needs to work on the value proposition here — and get the tech to work right. Consumers just aren’t going to put up with it, for good reason.

Wireless earbuds aside, before Alexa will be of value to me on the road, she’s going to have to be as smart as Google is when I do a search on my laptop or phone. Right now I’m hearing too many “Sorry, I’m not sure about thats.”

The challenge for Alexa will certainly be acting as a third-party app on mobile platforms which openly compete with Alexa: Siri and Google Home. Of course iOS and Android are going to favor their own assistant technology. That said, third-party integrations often work just fine. My Bose headphones integrated with the Google Assistant by default, for example. Mobile platforms might have an existential problem with offering an Alexa integration, but if Alexa is what customers prefer, they’ll have to tow the line.

It’s not the biggest roadblock that Amazon doesn’t have its own smartphone, as many third-party developers have made excellent software and hardware for mobile devices. However, Amazon shouldn’t place too much emphasis on using its earbuds to grow Alexa’s market share — instead, its earbuds stand a better chance simply competing in the space based on their functionality as simple wireless headphones.

Last time I checked, most people only have two ears which means they can only wear one set of wearables at time. I’m a strong believer in voice-activated commerce, but I think Amazon would be better off putting the R&D money into improvements in the existing system. If they are successful at developing the Alexa equivalent of what, in more innocent times, used to be called a, “killer app,” selling the earbuds down the road will be a slam dunk. But if all the earbuds do is draw attention to the limitations of the model, the whole voice-activated enterprise may be compromised.

An Alexa earbud? Amazon has a whole lot of catching up to do. Alexa needs to get a lot smarter to turn the Apple tide. Enticing if cheaper yet without a compelling use case, it will likely go the way of the Fire Phone. Ordering goods on the go and commanding Alexa to execute thousands of Alexa skills likely will be lost on the normal Air Pod user as too complex to deal with or learn. Amazon is a bit late to the party, showing up without a phone.

I’m not so sure this will have any material impact for Amazon. There are other wireless headsets today that have Alexa capability, so being a third-party integration isn’t the issue here. However, one of the main reasons consumers buy AirPods is not Siri, it’s the seamless Bluetooth connectivity. If Amazon doesn’t get that part right, adoption will be tough.

I believe Dave Bruno has hit the nail on the head here – the issue is with people forgetting how to access all those lesser-used skills with special syntax. That’s what Amazon needs to improve. It’s not a lack of skills, it’s helping users remember how to use those skills. This has nothing to do with Amazon lacking their own smartphone platform. Just look at tablets – They’ve done just fine adapting Android to their Fire tablets. Are there any other Android tablets being used by consumers today in meaningful numbers?

In the not too distant future, we will all look like aliens with little things sticking out of our ears, at home, on the road, at the movies, in the office, in automobiles and sadly, even in restaurants. Technology will move from the device to the body.

All our technology and communication will follow us, not caring where we are, even in the comfort of our living room.

Amazon will likely sell a lot of them — especially when they bring these out with big TV ad budget and distribution in extensive non-Amazon brick and mortar.

What they won’t do is radically change the voice command market. Alexa will continue to be used primarily to get the weather and change the music.

I can’t see Amazon earbuds causing a mass exodus away from Apple’s AirPods, if nothing else because Apple is the king of the ecosystem. If you have an iPhone you’re likely to buy the AirPods because everything works together with as little friction as possible. I think that’s the key point from this piece. Amazon’s earbuds have to work with third-party devices which opens up all sorts of opportunity for friction.

That said I’m sure in the future everyone will be releasing earbuds with virtual assistants built in (if they haven’t already). Whether we’re culturally ready for that yet though I’m not sure. Voice is still one of those weird things when out-of-the-house — you don’t really want to be the person on the train saying “Alexa remind me to buy milk” when it’s more private, less disruptive and as fast just to type it.

Fascinating. What I have always really struggled with is how alternatives to Apple products are priced, i.e. very high. I am thinking non Apple smart phones that appear to be priced in a similar way.

This offers Amazon a way to get into the Apple ecosystem of users, but to win over iPhone users they must offer a significant price advantage over Apple to make up for the potential additional hassle of connecting. But also to divert people away from the likes of Jabra, RHA, AKG etc, they need to consider price as well.

Braintrust
"Amazon needs to work on the value proposition here — and get the tech to work right."

"The challenge for Alexa will certainly be acting as a third-party app on mobile platforms which openly compete with Alexa: Siri and Google Home."

"That said I’m sure in the future everyone will be releasing earbuds with virtual assistants built in ... Whether we’re culturally ready for that yet though, I’m not sure."