Will an Amazon private label diaper prosper under a new name? 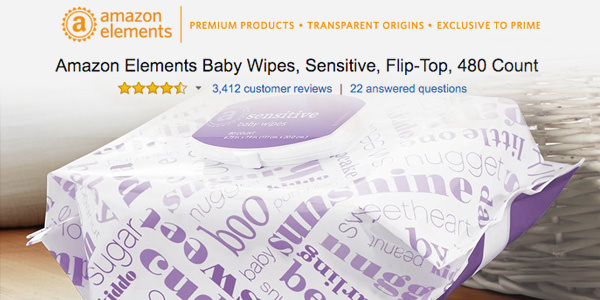 Parents don’t take diapers lightly. Amazon discovered this about a year ago when it discontinued its line of private label diapers amid complaints of poor quality by consumers. The diapers, released under the Amazon Elements moniker, only stayed on the market a little over a month. But a report by ReCode indicated that the e-tailer may be back in the diaper game with a slightly different strategy.

Amazon, according to the report, has been contacting users with a market research survey about a brand called “Mama Bear” diapers. The survey solicited reactions to “Mama Bear” diapers’ branding. It asked if the branding evokes a “high quality product” and if the survey recipient would have an interest in purchasing the diapers.

According to the ReCode article, the URL at which the survey was hosted contained the words “Amazon Elements,” suggesting the market research was being conducted for a new Amazon private label product.

Given the strong consumer reaction to the low quality of the original Amazon Elements diapers, it could make sense to start fresh with new, unrelated private label branding. But despite last year’s diaper setback, the rest of Amazon’s Elements line seems to be doing quite well. An article in Fortune attributes an overall increase in CPG e-commerce over the past year to Amazon, and the Elements line makes up no small part of that.

The Fortune article cited a study by 1010data which indicates that CPG e-commerce grew 42 percent in 2015. This rate of growth was 12 percent higher than the 30 percent growth of total e-commerce in the same time frame.

The study further indicated that Amazon’s Subscribe and Save program, which schedules automatic replenishment for CPG products, has been driving the segment’s growth. According to the study, more than 20 percent of e-commerce CPG growth came from Subscribe and Save. Of CPG brands with more than $5 million annual sales, the study found that Amazon Elements was the fastest growing.

Please practice The RetailWire Golden Rule when submitting your comments.
Braintrust
"I don’t understand why Amazon doesn’t get behind a great natural diaper brand and market a bundle of products moms already love."

"There is no reason why Amazon could not successfully relaunch its diaper line, provided that the product quality is good and the diapers are a good value."

"If Amazon’s newly developed and positioned diaper can satisfy the minimum functional needs and is priced at a lower price point, then consumers may be tempted to trial the product."

9 Comments on "Will an Amazon private label diaper prosper under a new name?"

But let’s remember that the original failure was due to poor product quality, not mediocre branding. If the “new” line has the same problems, it too will fail. Amazon would do well to study the Costco model, which stipulates that anything carrying the Kirkland name be of superior quality.

Again, there is nothing wrong with the Elements program that a little better product design couldn’t fix. Once they embrace this principle the sky is the limit.

I don’t understand why Amazon doesn’t get behind a great natural diaper brand and market a bundle of products moms already love.

They could win big with a brand like Seventh Generation instead of more trial and error in private-label product development. Diapers is a risky category and could cause them a loss of trust from millions of Millennial moms that would otherwise be a great asset as influencers.

Just seems like Amazon is moving from the core and trying to be too many things.

There is no reason why Amazon could not successfully relaunch its diaper line, provided that the product quality is good and the diapers are a good value. Customers were not satisfied with the quality of the diapers, not the overall quality of Amazon. And if the relaunch succeeds, look for the retail giant to introduce other products into the marketplace outside of the Elements line.

Entering the diaper market with a new brand is sensible because the negative perceptions of the old brand will linger. Success will result only if the new brand has a level of quality that consumers desire. The name of the brand will not overcome the quality issue. In terms of other brands, Amazon will have to ensure that new products live up to consumer expectations. A certain number of flops or low-quality products associated with the Elements names will result in a negative perception of the whole line of products. So the introduction of new products needs to be done thoughtfully.

As with all products there’s a big difference between low cost and low value. If a product doesn’t meet the minimum threshold to satisfy functional needs then it won’t matter how low priced it is as consumers will see no value. With diapers, parents will not care how much money they saved on private label diapers when they’re changing the diaper at 3 a.m. and find that they also have to change the baby’s clothes and bedding because the diaper didn’t meet the minimum threshold to satisfy the basic functional need of a diaper. If Amazon’s newly developed and positioned diaper can satisfy the minimum functional needs and is priced at a lower price point, then consumers may be tempted to trial the product. But Amazon will have to recognize that diapers are not usually or mainly purchased on the basis of price so they will have to ensure that the product, the marketing and the packaging all stand up to the quality test and then Amazon can add the value component to the rest… Read more »
0
|
0
-   Share

Parents hate spending money on diapers, but they hate crappy (sorry I couldn’t resist) quality diapers even more. That said, if they can find a quality low-cost alternative most will be sold.

Amazon’s best bet is to offer a free trial size to those who bought the Elements brand in the past. After more than a year some of those kids may be out of diapers by now, but for those who are not it seems like a fairly simple way to directly target those who may have a bad opinion and change their minds. Few businesses have the tools to be able to address a bad image problem so directly and inexpensively.

Parents remember poor quality when they are shopping for baby products. Changing the name is not going to make them forget because the Amazon name is still connected. Amazon does not take defeat lightly. This might be one of those times where they have to accept it.

Agree with the perspective that it all starts with quality. Amazon can rebrand it all they want, but when a diaper fails, parents have much different words to use than what Amazon planned.

I would be surprised that customers who used the product in the past will give it a second chance, but the beautiful thing about these products is that new customers are coming along every day.

Interesting question about Elements: my first reaction is to ask, why support multiple brands? Then again, isn’t that what Trader Joe’s does? Personally, I would stick with Elements.

Braintrust
"I don’t understand why Amazon doesn’t get behind a great natural diaper brand and market a bundle of products moms already love."

"There is no reason why Amazon could not successfully relaunch its diaper line, provided that the product quality is good and the diapers are a good value."

"If Amazon’s newly developed and positioned diaper can satisfy the minimum functional needs and is priced at a lower price point, then consumers may be tempted to trial the product."