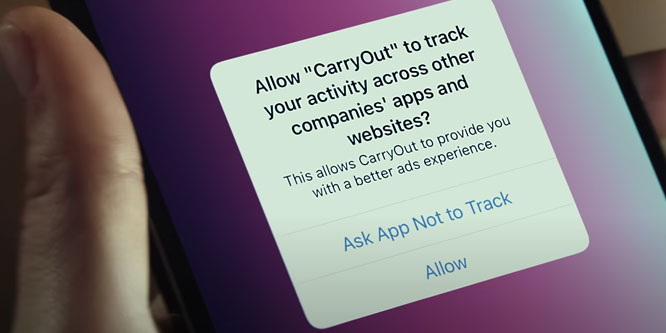 In a new ad that launched last week, Apple highlights its privacy features by imagining the sale of a consumer’s data in a real-world, high-stakes auction.

In the spot, “Privacy on iPhone,” a young woman, Ellie, stumbles into a secret Sotheby’s-style data brokers’ auction that is putting her data up for sale to the highest bidder. The auction starts with bids being placed for her “wonderfully personal” emails, then progresses to her drug store purchase history and location data. The auctioneer declares, “It’s not creepy! It’s commerce!”

The auction then proceeds to sell her contacts (even her grandma’s), recent transactions, browsing history and her late-night texting habits.

As the auctioneer is about to put another coveted piece of her data up for bids, Ellie turns on Apple’s App Tracking Transparency (ATT), which prevents third party apps from tracking mobile activity, and then Mail Privacy Protection, which helps combat email trackers. As she turns on the iOS tools, the bidders and eventually the auctioneer vanish.

The ad ends with the tagline: “It’s your data. iPhone helps keep it that way.”

Apple has made user privacy features core to its hardware and software products for years, gradually improving anti-tracking and other privacy-related features in iOS and macOS.

Speaking before the International Association of Privacy Professionals earlier this year, Apple CEO Tim Cook said, “A world without privacy is less imaginative, less empathetic, less innovative, less human” and noted that Apple has “a commitment to protecting people from a data-industrial complex built on a foundation of surveillance.”

Facebook has warned that Apple’s ATT technology will cost its ad business $10 billion in 2022, causing Apple to defend itself against accusations that it is handsomely benefiting from iOS privacy changes last year that has also impacted Snap and Google. Apple has received wide praise but also some skepticism about the effectiveness of iPhone’s privacy safeguards.

Tech writers commended the new ad for simplifying the complex process of how cookies work, but some wondered how many consumers care. Writing for BGR, Chris Smith stated, “Most internet users accept the trade-off, having their data harvested for ads in return for free services. Apple has been arguing for years that the trade-off isn’t necessary.”

DISCUSSION QUESTIONS: What do you think about the effectiveness of Apple’s “Privacy on iPhone” commercial and the value of Apple’s positioning around privacy? Have consumers accepted the trade-offs of digital marketing or is privacy becoming a strong selling point for mobile phones?

Please practice The RetailWire Golden Rule when submitting your comments.
Braintrust
"I think this is a strong ad and a strong message. Apple has been a leader in privacy and I believe that their positioning will resonate with many users."

"It’s incredible, period. Consumers have ZERO clue – that’s how we got here in the first place. Apple doing a commercial as a REASON to buy the phone? Eh, maybe."

"The ad is shocking and scary and right on. Kudos to Apple for raising awareness and persuading consumers to take action."

I hope so! It seems good so far — Google instructions and voila, many pop-ups disappear. It’s just the beginning, I’m sure.

I think this is a strong ad and a strong message. Apple has been a leader in privacy and I believe that their positioning will resonate with many users. While it’s fair to say that people have already given up on privacy by the virtue of their online behavior, phones are even more sensitive because we carry them around with us everywhere, and the ability to track our location adds a level of privacy invasion that I suspect a lot of people don’t appreciate.

Trading data for “free” services is the standard online. Apple does a great job of showing just how much data is being sold – the question is whether consumers care enough to make a change.

I love the ad, and I love that Apple is offering more transparency and control for users. For Facebook and others, this means they’re going to have to be more creative in how they build an audience. Personally I care a lot about privacy and opt out at every opportunity. That sentiment is not widely shared in the consumer world however. Ads like this do a nice job educating folks about how their data is used, but it remains to be seen if it motivates them to make changes. We will see, I sense that sentiment is changing on this issue.

It’s incredible, period. Consumers have ZERO clue – that’s how we got here in the first place. Apple doing a commercial as a REASON to buy the phone? Eh, maybe. But people do not know what they do not know. I only wished the attendees were depicted more like what you would imagine the data miners at Facebook and Snap would look like – more Bond villain-ish.

And in many cases people don’t know what they could know.

The ad drives home what can happen when your personal data is captured and then made available. It should make those that have not thought about this topic think long and hard about it. It will also likely make non-Apple users consider changing their devices to those made by Apple. The cynic in me believes that is part of the reason for Apple making this move.

Apple has made critical investments and has focused on being the market leader in driving privacy and a personalized experience for iPhone users. Their go-to-market strategies are from a customer-first perspective, ensuring that anything related to data, data sharing, and privacy is transparently shared with the customers.

There is a sense of comfort knowing that end-users can control and understand our personalized experience and ensure that the brands we engage with and share data with can engage with us safely. This is driving brands and retailers to comply with Apple’s very transparent and secure privacy policies and optimize their digital marketing strategies to drive personalized and engaging experiences.

The ad is shocking and scary and right on. Kudos to Apple for raising awareness and persuading consumers to take action.

When in doubt, take the high ground. There is no question Apple listened to their brand lovers and delivered on a desirable capability. If it performs and continues to evolve and perform as promised the impact on retention is exponential, let alone referral. As an Apple stockholder, I’m thrilled. As an Android user, this gives me pause for the next time my Samsung bites the dust.

Apple knows that its customers are those who would not want to trade off their privacy for digital marketing. The brand is not much concerned with the customers who wouldn’t care about their privacy. Being an Apple fan, I appreciate the brand’s positioning around privacy and I guess its other customers feel the same.

Braintrust
"I think this is a strong ad and a strong message. Apple has been a leader in privacy and I believe that their positioning will resonate with many users."

"It’s incredible, period. Consumers have ZERO clue – that’s how we got here in the first place. Apple doing a commercial as a REASON to buy the phone? Eh, maybe."

"The ad is shocking and scary and right on. Kudos to Apple for raising awareness and persuading consumers to take action."