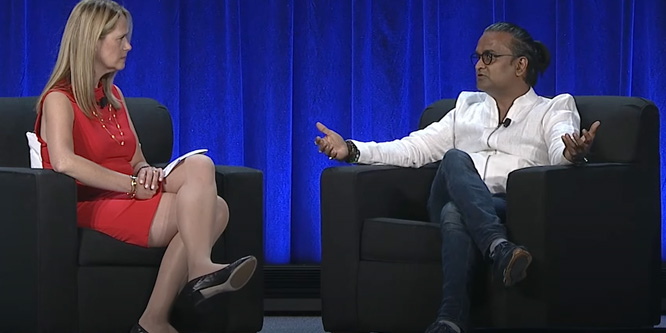 Shekar Natarajan, chief supply chain officer at American Eagle Outfitters, thinks it’s in his company’s best interest to work with competitors to deliver online orders to consumers across the U.S.

Mr. Natarajan, speaking earlier this week at the National Retail Federation’s inaugural NRF Supply Chain 360 conference, told the audience that collaborating with other competitors is a win all around for retailers, parcel delivery companies, consumers and the environment.

He described a system whereby consumers give retailers permission to consolidate orders. Packages from multiple retailers are sent to a single “funnel” point and boxed together for delivery to their final destinations.

Retailers and brands benefit from sharing last-mile shipping costs. Courier companies are able to achieve “more density at the doorstep,” making it cheaper for them to make deliveries. Consumers benefit because they are now getting one box at their doors instead of several, which reduces the number they have to break down. All of this activity from retailer to consumer, Mr. Natarajan pointed out, is also good for the environment given the reductions in fuel and packaging costs.

Mr. Natarajan said that it does not take that many retailers participating in the system to make a big difference on the cost line.

More than half the nation’s GDP is concentrated in the top 25 cities, he said. Those markets represent about 300 million packages delivered, with American Eagle accounting for about 10 percent of the total. A collaboration between ten American Eagle-sized businesses can result in real cost reductions. Get that to 100 businesses doing a similar volume and the math really begins to add up on an annual basis.

“We project that 49 billion miles will be saved [and] 90,000 trucks will be taken out of the system. And we will basically save $40 billion for everyone who’s participating in this, and it’s like a 30 percent reduction in carbon footprint,” he said.

DISCUSSION QUESTIONS: How likely are retailers in large numbers to buy into a delivery aggregation system like the one described by Shekar Natarajan? What do you see as the advantages and potential disadvantages to such a delivery system?

Please practice The RetailWire Golden Rule when submitting your comments.
Braintrust
"Seems like a creative, responsible, economic and ecologically friendly approach to delivery of retail goods. "

"Retailers are very likely to buy into a delivery aggregation system – it’s not only cost effective and efficient but also sustainable."

"I see this as one of the only ways to compete in this market."

I don’t see an issue with retailers consolidating packages for shipping from a competitive perspective, as it is essentially the shipper that is aggregating orders. The complexity of the process will be the challenge. Finding multiple orders from disparate retail organizations that are on the same delivery schedule will be the greatest challenge. The combining of boxed orders into another box actually adds to packaging. However the idea of reducing delivery drive time and fuel is admirable.

Improving delivery efficiency through aggregation makes sense. Although if overall volumes remain the same then it will likely necessitate bigger trucks to fulfill all orders. The real issue is that not all retailers will want to participate. Amazon and Walmart are both doing their own things with fulfillment, then you have a whole raft of delivery companies like Instacart. On top of this, consumers demand a range of services – same day, next day, expedited, etc. – and aggregation isn’t going to meet all those needs. As such, as sensible as this is, it is a partial solution.

Seems like a creative, responsible, economic and ecologically friendly approach to delivery of retail goods. It would also seem to be a way to provide an alternative to the de facto consolidator today, Amazon. Of course, it’s also smart of American Eagle to suggest this approach, given their recent investments.

I see this as one of the only ways to compete in this market. It’s a monumental task to make a significant profit going it alone against the COMPETITION, and this idea presents one way to survive. Retailers should definitely think about using RFID tags and serialized inventory for co-shipping. As far as the environmental reasons, we can’t continue with this environmentally toxic multi-delivery, cardboard nightmare we have created.

Beware, though. Marketers will be pushing back on this big time, because of the diluted brand experience. Do you really want your customers getting clothes from American Eagle Outfitters, Gap, and Urban Outfitters in the same box? There’s a reason there are millions of “unboxing” videos on YouTube: it’s all about the customer experience.

Strong brands with differentiated product should welcome this idea with open arms. The efficiencies outlined in the article are exactly what is needed on every level. Retailer, customer and planet. Huge credit goes to AEO for their leadership position here.

Conceptually, this is a cool idea with tremendous benefit as outlined by Mr. Natarajan. The idea of several competing retailers all working together harmoniously to tie together last-mile delivery and shrink carbon footprint is noble indeed. Other retailers like Walmart have created their own versions of white label delivery services for other companies. Will this succeed? Maybe, but think about how difficult it is for any singular company to get their hands on all data in their own company, to eek out the most ROI from their tech stacks and to provide unique, value-oriented customer experiences better than anyone else. Now multiply that by five competing companies using, say, AEO’s system to deliver product. Who owns the data? How is it separated, compartmentalized, and kept in compliance with emerging privacy and security laws? Who gets access to these customers? Who controls the analytics? As noted, I love the idea, but I’m not sure how many are going to jump on board.

Similar to the valid concerns raised when using Amazon FBA. I think Natarajan’s idea should be tested, but without co-operative warehousing as well, aren’t the merchants simply shifting where boxes get shipped from their respective DCs, and adding some unpack/sort/repack labor, rather than removing boxes and labor altogether?
Optimistically this could remove a half-step of transportation and packaging. However I suspect he may have simply just invented a less-efficient Post Office.

Retailers are very likely to buy into a delivery aggregation system – it’s not only cost effective and efficient but also sustainable.

Retailers are feeling impacts of overbuying, increased supply chain costs and inventory management challenges – all impacting profitability and GM. Partnering with solutions that will minimize costs AND that aligns with having tremendous impact on their carbon footprint is a win.

Disadvantages would be directly tied to the solution, its data capture and how timely deliveries are. If brands don’t rethink last mile and think they are getting in bed with their competition, they are very wrong. Department stores and multi-brand retailers sell and deliver multiple brands so this would not be a valid reason to not get on board with an aggregated delivery solution.

People of the same trade seldom meet together, even for merriment and diversion, but the conversation ends in a conspiracy against the publick, or in some contrivance to raise prices – Adam Smith

I don’t doubt there are many advantages to aggregation; my concern is with how the information is shared to make this possible: I certainly don’t have any trouble with shipping companies receiving generalized info about destinations and consolidating shipments (it’s hard to believe that doesn’t occur already), but I have a great deal of concern about retailers sharing that info among themselves.

So definitely a “devil in the details” situation, rather than an absolute “yes” or “no.”

Hearing about cooperative approaches such as this one always cause me to ask the same question — why aren’t mall owners coming up with these ideas and offering their “consolidated locations” as the aggregation point for this type of last mile service? Yes, there have been a few examples of this, with 3rd party startups offering this service to mall owners and then seeking out retailers to participate (a true platform/marketplace approach), but given the challenges to organize the operations of this collective approach as suggested by Shekar Natarajan, it seems this would be a lower cost and less complex starting point.

Braintrust
"Seems like a creative, responsible, economic and ecologically friendly approach to delivery of retail goods. "

"Retailers are very likely to buy into a delivery aggregation system – it’s not only cost effective and efficient but also sustainable."

"I see this as one of the only ways to compete in this market."