Will Erewhon become the next Whole Foods? 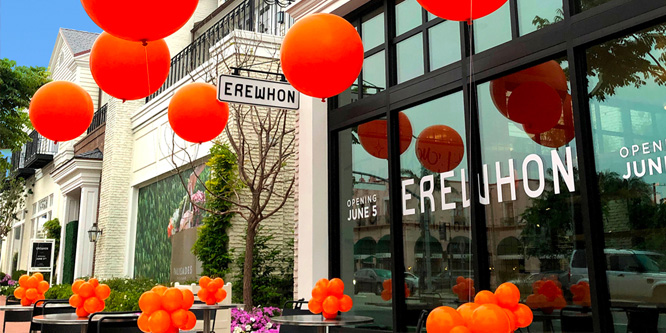 A new grocer may be debuting on the national grocery stage after years as a successful local player in Southern California — with some help from a private equity firm.

Los Angeles-based Erewhon plans to build out a new presence in Northern California followed by a potential expansion into New York City, reports Forbes. Behind the move is private equity firm Stripes Group. The firm owns a minority stake in the grocer and has backed startups like Seamless and Levain Bakery. Stripes Group envisions Erewhon becoming not just a nationally successful grocer, but “the most trusted in better-for-you food.”

In its current incarnation, the grocer has been described by foodie/travel website Well and Good as “crazy-expensive,” with a pricey but meticulously curated product mix. The L.A. locations are often listed as good places to bump into celebrities.

The chain could face hurdles as it attempts to go national due to a few factors.

Private equity relationships have grown controversial in retail, with some attributing the decline and collapse of retailers including Toys “R” Us to unserviceable debt.

Further, a national expansion could put Erewhon into competition with entrenched and well-financed organic grocers, most obviously Amazon.com-owned Whole Foods (though Well and Good indicates that the Los Angeles locations manage to thrive with Whole Foods locations in the vicinity of every store).

Amazon is introducing another wildcard to the national grocery landscape as well, with The Wall Street Journal reporting that the e-tail giant is moving forward with plans to open dozens of brick-and-mortar grocery stores unaffiliated with Whole Foods throughout the U.S. Amazon has Los Angeles, Chicago and Philadelphia locations planned, with some leases already signed.

Other established regional grocers have likewise been expanding into the national better-for-you space.

Publix, for instance, recently announced the launch of its 12th GreenWise Market location in Florida, according to Supermarket News.

DISCUSSION QUESTIONS: What would it take for a company like Erewhon to be successful on the national stage? Does playing ball with private equity put the company at risk in the long term?

Please practice The RetailWire Golden Rule when submitting your comments.
Braintrust
"No doubt capital is important for expansion … just be careful who you jump into bed with to get it."

8 Comments on "Will Erewhon become the next Whole Foods?"

Erewhon has a great proportion and is a trusted brand among consumers that use it. In my view, it is a cut above Whole Foods. I think there is potential for national expansion, however, I would sound two notes of caution.

The first is that grocery is cutthroat. Even in a “premium” segment, margins are still under pressure and competition is intense. I think Erewhon has strong points of differentiation, but return on investment will be challenging.

The second is that the rest of the country is not California. This sounds flippant, but California is a very distinct market with some specific consumer needs and behaviors. There are undoubtedly pockets of similarity elsewhere, but Erewhon will need to find them with its location strategies.

Beware the burdens of unbridled debt! Scale achieved through debt places such a burden on the backs of the operations that brands often lose the ability to express themselves in ways that consistently connect with shoppers. Pressure to grow, preserving margins and quarterly reports can easily take precedence over customer priorities, and too often brands lose resonance. I love Erewhon, and hope they continue to thrive, but fear they may have sold their soul in the name of growth.

Agree, if the soul is diluted the brand becomes a commodity and consumer trust can easily waiver.

Setting aside the question of whether or not Erewhon will be successful on the national stage, the red flag goes up with the inclusion of a private equity firm behind the rollout.
Take a look at the disasters created by these equity firms and their leveraged buyouts over the years — Toys “R” Us, Claire’s, Gymboree, True Religion … to name just a few. Being harnessed with mountains of debt by these LBOs sank them fast. The only ones to make money were the equity firms, and lots of it too. No doubt capital is important for expansion … just be careful who you jump into bed with to get it.

I believe there is space in this segment for other players besides Whole Foods. The move to organics is gaining traction everywhere and this trend will only continue. Erewhon won’t work everywhere but following a path that co-locates within a short distance from Whole Foods stores will get them into the best demographic locations in the country. In my first-hand experience in this space I have found that growth for competitors exists, either traditional or specialty grocery, when there is such close proximity. Erewhon needs to be careful with their PE commitment. Many retailers have large real estate holdings which make them a great PE investment. This real estate is often leveraged/sold and retailers are frequently challenged to make this new model work. Whole Foods started with a symbiotic PE investment and this Erewhon deal seems to be similar as they only have five locations today.

I don’t think they can replicate Whole Foods, and they would have to compete in the same areas, where higher income consumers live. This concept would not survive in most cities, and forget the rural areas as well. High priced organic food and other clean eating food is priced way beyond the average pocketbook, and Whole Foods has the backing of Amazon, who will make sure that this competitor will get hammered if they enter Whole Foods’ turf. Stay small and local and make money would be my advice, but I could be wrong.

There will not be room for many players that find themselves in “the middle.” Amazon can take Whole Foods down market, and I think we’ve already seen some of these strategies go into effect. There is market space at the top where Erewhon can find a home and thrive when others flail in the coming economic and retail changes. Consumer awareness and demand for thoughtful and “safe” food is a concern that will continue to increase and drive demand. I would challenge finding “better” locations than Whole Foods vs. competing directly; location and assortment strategy will be key. Can a shopper buy everything they need in one store or will they have to shop a multiple? With a billion people under the age 35 entering the affluent market over the next 5 years, I think we’ll see more opportunities in a farm to fridge, sustainable, farmer’s market feel, natural and chemical-free grocery play producing higher long-term loyalty. I agree with Dave. The PR strategy has to encompass shopper experience and keep the soul of the… Read more »
0
|
0
-   Share

If the description of Erewhon as “crazy expensive” is actually true, I give them little chance to create a widely accepted national footprint. At the risk of giving away a good idea, I think the big winner in “better for you” foods will be a retail grocer that adopts a Trader Joe’s/Aldi’s approach with healthy products in stock. In other words, the first grocer to make healthy food affordable for the masses will become the dominant player in the long run.

This opinion is held separate from views on whether private equity firms are “good” partners over the long term. Capital is needed for growth, but standards of the deal structure needs to adapt in acknowledgement of failed retail partnerships with private equity.

Will retailers learn from the past mistakes of others? Time will tell.

Braintrust
"No doubt capital is important for expansion … just be careful who you jump into bed with to get it."