Will Five Below strike gold in California? 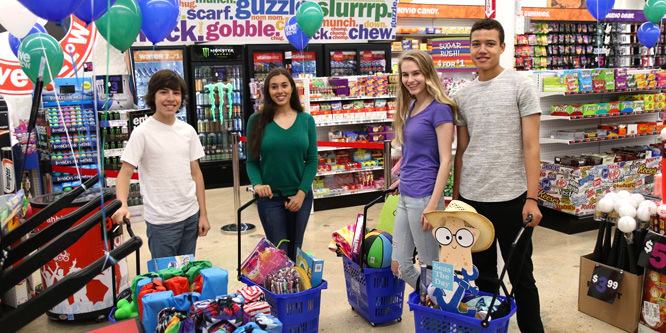 Five Below, the retailer that serves as magnet for pre-teens, teens and quite a few adults, as well, is moving westward as part of its plan to grow its store count from its current 550 to 2,000.

The chain, which groups products into eight “in-store worlds” — candy, crafts, party, room, sports, style, tech and now — entered the California market for the first time last month with the opening of nine locations in the southern part of the state.

“Our growth westward has been careful and strategic, and well worth the wait as we believe Five Below will have a tremendous reception and reaction in Southern California,” said Joel Anderson, CEO of Five Below, in a recent statement to announce the chain’s newest stores.

“We’re not just dipping our toe in the Pacific with these openings, we’re diving in with nine stores and several more to follow within a matter of months,” he said. “We expect California to be our largest state for stores in the coming years.”

Five Below, which sells goods for $5 or less, as its name claims, operates stores that are roughly 8,000-square-feet. It operates out of shopping centers that are anchored by national retailers.

Last year, Five Below engaged in a soft launch of its e-commerce site last August. While not offering specifics, Mr. Anderson said the company was “very pleased” with the site’s sales performance during Christmas. He said Five Below was “enhancing the assortment and mobile customer experience and will soon also be able to ship nationwide.”

DISCUSSION QUESTIONS: Has Five Below developed a winning formula that will allow it to grow its store count from its current 550 to 2,000 units? What challenges and opportunities do you see for the chain as it ramps up its store count?

Please practice The RetailWire Golden Rule when submitting your comments.
Braintrust
"Management will need to remain focused and disciplined on continuing to execute the basics while they grow."

"Adding stores is only one part of a long-term strategy for surviving in today’s shifting market place."

"Five Below could turn into a has-been overnight should some new shiny bright object catch the attention of its fickle demographic group."

8 Comments on "Will Five Below strike gold in California?"

Five Below’s successful formula is reflected in their strong results and I believe that they will achieve their growth targets. While most of the stuff sold at Five Below could be purchased at lots of different places, they have the one element that has proven to be effective even in a difficult retail climate — the treasure hunt. And specifically it’s a treasure hunt environment for kids and teens. Like all retailers, Five Below’s big challenge will be effectively managing the growth. Growth is great, but it’s also addictive and can mask operational inefficiencies that can easily crop up during high growth. Management will need to remain focused and disciplined on continuing to execute the basics while they grow.

Any retailer, no matter how hot, should beware of hyper-expansion. Five Below, which is hot now, could turn into a has-been overnight should some new shiny bright object catch the attention of its fickle demographic group. All of this said, Five Below has created a new, fun way to shop and consumers are responding by driving its sales upwards.

Five Below has a great product, seems to have figured out how to hire better-than-average retail employees and is consistent in the area of execution. If they can stay on track they should be able to scale to 2,000 locations successfully.

Five Below has built an excellent and very scaleable business model and is poised to be a player to be reckoned with in California. Five Below and the other dollar stores are unique in the retail universe, as they are in expansionary mode while others are in the midst of the retail disruption/transformation phase (I prefer not to use the word apocalypse).

However, with any expansion strategy, Five Below should stay on mission, ensure that the successful culture and business strategies are maintained and keep their assortments tight, compelling and on-trend. With any expansion strategy comes the associated pressures to scale their IT organization, infrastructure and fulfillment capabilities as well as ensure that their back office has the scale to keep up with the store base.

Five Below has a unique strategy, especially as it has built an impressive position in the market as a leader in affordable gadgets and electronics, which has resonated very well with the Millennial and Generation Z markets.

Five Below is enjoying a shopping trend among consumers that off-price retailers such as T.J.Maxx have established — the hunt for a great deal. Discount retail in general, including off-price, is enjoying a boom at the expense of traditional brands, particularly department stores. Shoppers are on the hunt for great deals and bargains on quality merchandise in all segments, not just apparel. Five Below has successfully developed this trend into their eight “worlds” and the growth they report is proof enough that the model works. While aggressive expansion is risky for some retailers today there appears to be no sign Five Below will do anything but succeed in this market.

Adding stores is only one part of a long-term strategy for surviving in today’s shifting market place. Same-store sales need to hold up as well. That means continuing to attract their target market, which seems pretty limited and is one of the most fickle.

Five Below certainly has an interesting concept that’s found success in other parts of the country. As Max mentioned earlier, the threat of hyper-expansion is very real. Within the last decade, a similar retailer entered the California market called Daiso. Daiso is a well known Japanese retailer that sells a majority of its goods for $1.50. They were very successful initially and expanded their locations all over. They didn’t make the mistake of hyper-extension, but managed to curb their appetite before failing to see they were over reaching. A few extra stores closed down, but they are still a prominent retailer. Five Below has plenty of potential and I hope to see one of their stores soon.

It appears that Five Below has identified a lucrative niche that seems to be untapped. The fun environment built on young consumers’ thrill of the treasure hunt has more options than dollar stores and the products are geared towards their specific demographic.

Discount and off-price stores have been one of the hottest retail segments for several years. Five Below’s focus on a specific demographic may start a new trend of more targeted discount stores. They appear to really understand what their customers like and have created a fun environment that has created brand enthusiasts among teens and beyond.

The biggest challenges to aggressive growth plans are location and product. It is always critical to select the right location based on demographics and lease costs. Fortunately, there are a lot of open spots in malls that are probably a good fit for Five Below. From a product perspective, the challenge is to understand regional nuances and adapt to new trends.

Braintrust
"Management will need to remain focused and disciplined on continuing to execute the basics while they grow."

"Adding stores is only one part of a long-term strategy for surviving in today’s shifting market place."

"Five Below could turn into a has-been overnight should some new shiny bright object catch the attention of its fickle demographic group."